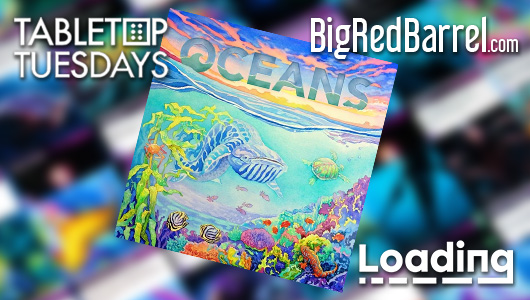 Join us every Tuesday and you could win a copy of the feature game just by trying it on the night!

Also, please note that the bar has moved location and is now nearer Stoke Newington station.

What: A celebration of the best board, card and tabletop games with themed nights and prizes – all washed down with awesome gaming cocktails! We usually feature a new game every week. Each week you can play this new game for free and usually have the chance to win a copy just by playing the game throughout the evening.

Cost: Free entry and games are free to play, just make sure you buy your drinks!

Feature Game: Each week we feature a different game. There is usually the opportunity to win a copy of this game just by playing it on the night. Everyone that plays the feature game is entered into a free prize draw near the end of the evening.

This Week’s Feature Game is: Oceans

A part of the award winning Evolution series, Oceans is a beautiful, engine building game centring around marine life. You must adapt and overcome the many challenges set out before you from an ever-changing ecosystem to deadly predators.

While it is a little long for our events, it looked too good to miss – so we may have trial games that limit how long games go for – just so we can make sure everyone gets a chance to play. Should make for a great night and a great prize, so make sure you join us.

There are epic battles every week at Tabletop Tuesday – magic vs dragons, monsters vs robots, ninjas vs pirates, pandas vs gardeners are all standard fair but this week we can settle one of the battles of the ages – who comes out on top in Chicken Vs Hotdog?!

A game of flipping object, pitting two teams against each other, bidding on challenges and racing towards completing challenges successfully. A flippin’ good time is pretty much guaranteed but if you are lucky you could walk away with your very own Chicken and Hotdog and can continue the epic battle in the safety of your own home.

One of our dinosaurs is missing! Or perhaps some ancient artefacts or historical keepsakes – at any rate they have been stolen! Thief–ed! Half-inched by some neerdowell or miscreant! I know I shouldn’t profile based on looks alone – but all I can say that is a very suspiciously guilty looking chicken!

Use your detective skills to work out if we have successfully corned the culprit in the museum lockdown. 2-4 Players, quick and easy to play, you have no excuse not to play – unless it is YOU who are the guilty party! You will be guilty of missing out on a fun night if you don’t join us.

A game we have had as a few of our previous feature games – OK Play is one of my go-to games for whenever someone asks me for a quick to learn, fun to play game (my other go-to being the equally awesome but very different, Timeline.)

Basically, OK Play is quite like Connect 4 without a board – except you have to get five in a row but can play with up to four players. Fun, easy to learn and can possibly be won for free just for coming along and playing – no excuse not to say “Ok Play” this Tuesday!

Our Halloween Special event is taking place on the extra spooky Tuesday 32nd October (aka 1st November) and we have a hell of a game! Unmatched is a very highly rated game and we have the Hell’s Kitchen version (featuring the Halloween themed appropriate Daredevil alongside opponents Electra and Bullseye) and also be showcasing Unmatched: Battle Legends Vol 2 (featuring the Halloween themed appropriate Bloody Mary and Friends!)

It is a really highly rated game (an 8.5 on BGG) and should make for a really fun evening. Playing either game will give you a chance of winning a copy of the game at the end of the evening.

It is that time of the year again when Spring is in the air and cupid is readying his bow just in time for Valent… WHAT?! It isn’t mid-February already? Huh! I guess we are ahead of schedule on this one, while also being about 10 years late! Love Letter is a popular modern classic that has spawned many variants and while we have some, such as the Marvel Love Letter version in the bar, we will be returning to the original classic version.

Try and deduce the best way to get your love letter to the princess. Play on Tuesday and you could win a copy just by playing on the night!

All the people love a meeple! – and for the small amount of people unfamiliar with the term, a “meeple” is just a human shaped small piece of (normally) wood used to represent a player (or people under control of the player) in a variety of games. Meeple Land as the name suggests is worrying, as it seems to indicate that the meeples have become sentient and taking over – but fear not! It turns out Meeple Land is just a funfair amusement park where meeples like to hang out.

2-4 Players take 45 minutes to battle it out to see who’s meeples have the best time in their respective funfairs. Sounds like an ideal game for Tabletop Tuesday. Join us for a fair bit of fun, a good quantity of meeples and the chance to take your own copy home.

Keyforge was one of my favourite games of recent years and I was very sad when it looked liked it was being retired – great news then that it was picked up by Ghost Galaxy. To help celebrate the recent launch of their crowdfunding campaign of the latest sets (Keyforge: Winds of Exchange) we are having an event for one of their previous sets, Keyforge: Worlds Collide.

A game I know reasonably well and a good game to be taught rather than having to learn all the rules from scratch. We will have multiple sets of (unique) decks of cards to be won on the night and some extra special prizes too.

Choo Choo mofo! Us gamers LOVE a game about trains – even when they are underground or overground (but not when Wombling free!) Next Station London is the latest flip-and-write card game from the acclaimed and prolific friend of Tabletop Tuesday, Matthew Dunstan. A once (semi-) frequent guest at our events for some of his previous games, Matthew has now moved to the Czech Republic, so we will excuse him not commuting in for this one!

Quick to play for up to four people with some additions that act as mini-expansions for extended replayability, should make for a fun night. Come jump on board and you could be travelling home with your very own copy!

Winner of the 2022 Kennerspiel des Jahres, you are tasked with saving the forest from the flames of Onibi. Playing as a nature spirit, an animal guardian, who must try pushing your luck and utilising deck, bag and pool building to help defend the Sacred Tree from fire damage.

Highly rated, really pretty, 1-4 players and at 40 minutes playing time, I expect this to be really popular with regulars and new gamers alike. If you come down to the woods today (or on Tuesday) you are in for a Big surprise!

You may have seen Tabletop Tuesday and Loading Bar featured on Episode 6 of 2014’s BBC’s The Apprentice. You can read more about that here!

See BigRedBarrel.com‘s Twitter and Facebook page for further details on a week by week basis. You can also sign up to receive further details from our Tabletop Tuesday MeetUp Group.