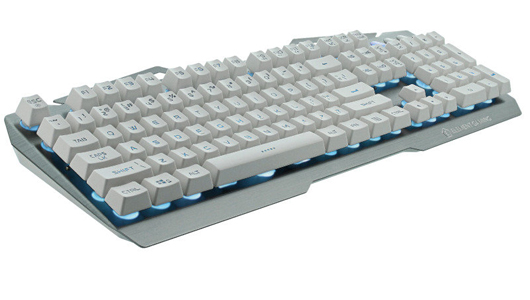 However good a game’s graphics, gameplay or story-telling are, the interface is key to immersion and enjoyment. This is why people will spend the extra £75 for the XBox One Elite Controller, it is the reason that motion control never really worked as anything more than a bit of fun and it is one of the main reasons that I am such a VR skeptic. For true immersion that permits flow you want the interface to be something you forget even exists. As such, for PC gamers, your choice of keyboard and mouse are as essential to enjoying gaming as the game itself.

When the kind folks at eBuyer offered Big Red Barrel a chance to review Element Gaming’s new Palladium Keyboard somehow I managed to put my hand up first. At £39.99, the Palladium keyboard is designed to fit in between Element Gaming’s cheap as chips Thorium and the more top end Beryllium range.

Opening the box, I was immediately impressed with the build quality. The solid keys sit on top of a brushed aluminium plate. The cable between the keyboard and the USB connector was nylon braided, rather than the cheap looking plastic cable standard with most keyboards, this is a nice touch that shows Element’s commitment to a high quality feeling product. Simplicity also seems to be high on Element Gaming’s agenda with no manual to speak of, just one sheet of card to boast about features like anti-ghosting technology and to explain how to change the LED lighting (more on that later). There was also no pointless driver disk in the box with software to clutter up your taskbar (an all too prevalent evil among PC peripherals in my humble opinion!). 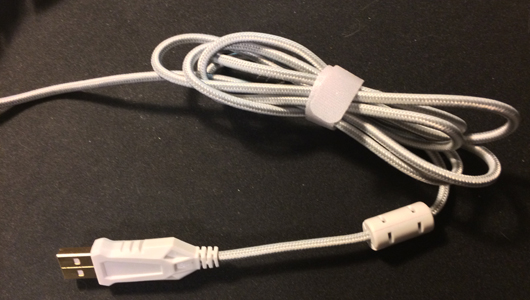 Now listen carefully, because here comes the “Science bit.” The Palladium Gaming keyboard has injection molded keycaps (each lit with an LED), 19 gaming grade anti-ghosting membrane keys (technology that ensures the keyboard can interpret simultaneous key presses from the most common keys used for gaming), and a 10 million keystroke life cycle. All of this is set out on a satisfyingly heavy base to ensure the unit does not move about in the heat of battle (or essay).

The keyboard does lack a few features common in gaming keyboards. There is no wrist rest, making long sessions potentially uncomfortable if you do not have a separate rest. While in common with almost all QWERTY keyboards, there are little raised bars on the F and G keys to position the hand for touch-typing, there is no similar raised marker on the S key for WASD gaming. There are also no programmable keys available, pretty common on keyboards at this price point. 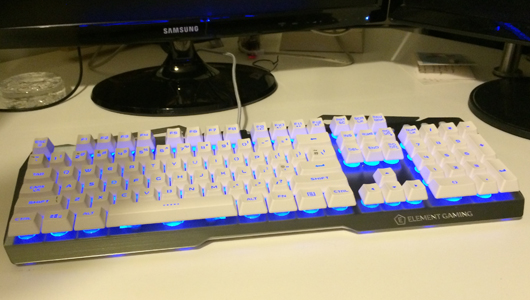 The keys themselves have a surprisingly long push length, which does take some getting used to. They are a far cry from the snappiness of a typical PC keyboard. This means that typing takes slightly more effort, but reduces the possibility of accidentally pressing the wrong key.

My biggest frustration with this keyboard comes from a surprising source: the Enter key. For reasons that I cannot fathom Element have elected to make the Enter key only one row tall so that anyone familiar with the, much more common, larger Enter key will frequently hit the “#” key instead. This meant that, even at the time of writing this article, any typing I do ends up punctuated with hashtags.

Which is really annoying!#

I’m sure that any user would get used to this eventually, but a more typical keyboard layout would have been easier to use. 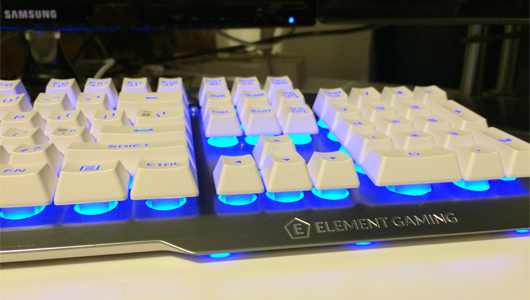 Each key is raised above the metal plate. This is designed to make the keyboard easier to clean, allowing any dirt to be blown clear of the keys without specialist keyboard cleaning equipment. Take a look at your keyboard, if there are toast, cake or crisp crumbs in between your keys then this may well be a feature that you need.

Perhaps the most pleasing feature of the Palladium keyboard is the LED lighting that illuminates both the letter, number or symbol on the top of the key and underneath. There are seven different colours to choose from, allowing your keyboard to match the color scheme of your gaming suite, the brightness can be adjusted and, if you are the sort of person impressed by fibreoptic Christmas trees, you can set the keyboard to pulse gently between colours. All of these options are available by using the Function and F keys with icons on each of the keys so you do not have to refer to the (all but nonexistent) manual. 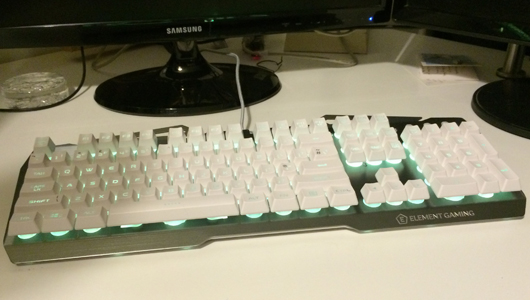 In order to try and give at least the W,A,S, and D keys a workout before writing my review I spent a couple of evenings playing Hard Reset an old-school sytle FPS from Flying Wild Hog. It’s frantic and fun and beautiful and, at the time, was only £1.49 on Steam. It’s not the longest or best plotted game out-there but I would highly recommend it at that price point. My experience with the keyboard was all I could hope for, that is to say I completely forgot it was there. It was just me, two strange sci-fi guns and a lot of robots who wanted me dead for some reason.

And so, in conclusion, should you buy the Element Gaming Palladium keyboard? With a quite few gaming keyboards in this price range, the Palladium’s metal construction and classy styling certainly allow it to compete on quality. If the variable lights appeal then this is a very attractive keyboard. If, however, you are going to follow the example of Big Red Barrel’s own Doctor Doctor Destiny Dan and undertake a large piece of academic writing, I would suggest you find something with a shorter key-press and a larger Enter key.#