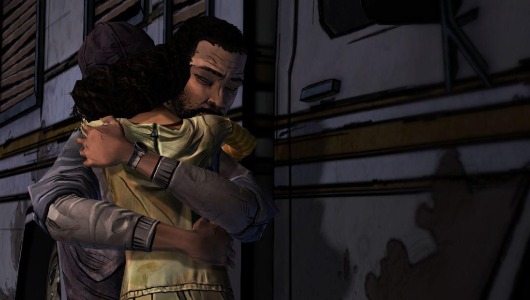 Games of the Generation: The Walking Dead

The Walking Dead won over ninety Game of the Year awards in 2012 for a reason. This same reason is why the game seemed to snowball in popularity until, like many others, I too became emotionally invested in a story of overriding poignancy that deserves to be named a highlight of this gaming generation.

The first character you meet in The Walking Dead universe is Lee Everett. It seems unusual to be hoisted into what appears to be a villainous role, yet Lee is revealed in the back of a police car during his prison transfer for alleged murder. Lee’s past is revealed partly at the player’s discretion; Lee’s actions can more than make up for it, if you so wish for them to. His narrow escape after the police car is tipped from the road is shortly after met by an attempt on his life by the same officer responsible for him, only now slightly more dishevelled, demonic and hungry . After a hair-raising sequence that follows the same rules as in much of the combat, namely scrabbling for a functional weapon in a time limited point-and-click frenzy, Lee survives,  freeing him up to a possible chance at redemption for his past in his efforts to maintain his present and future. The then introduced character of Clementine, an adorable yet admirable eight year-old acts as a motivator for Lee’s continuation to survive after he first saves her life in Episode One. 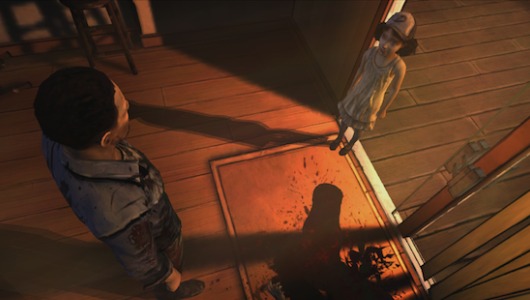 I’ve heard many a person describe The Walking Dead as an interactive cartoon rather than a game. The emphasis is on the characters themselves rather than the player’s role within them; a good balance of different dialogue options appear at important intervals in the characters lives, and act as the real points of interest in choosing a path in a story that has contains many roller coaster routes to its finale. Some of the hardest decision making comes down to timed conversations with other characters. Trust acts as a potent force in The Walking Dead. Kenny, a strongly family-oriented man, is one I never found hugely likable due to his lack of empathy beyond his wife and child, despite survival largely translating to reliance and support for other victims. However, the unfortunate and unavoidable events that happen resulted in a strong desire to have Lee levy the painful burden Kenny ends up carrying after his child is bitten by a walker, considering Lee’s own paternal role towards Clementine. Kenny relies on the hope provided by his wife and child; his strength comes from their need for him, and without this, he seems to deflate entirely, haunted by his loss and his complicity in its cause. 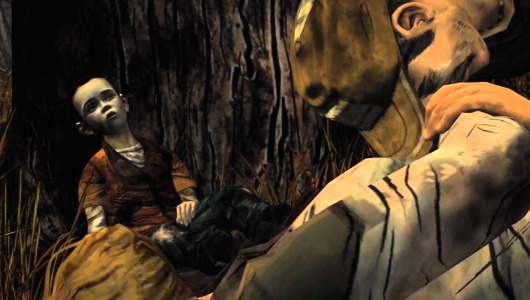 Telltale Games have managed to present characters that contain a great deal of internal conflict, ones that are so befitting to human nature through their individual methods of managing loss, guilt and disquieting memories. This is a  great achievement of a game that is contained within only five episodes.

In part, this is why The Walking Dead contains such memorable scenes, as many of the decisions are not as black and white as one may expect in an interactive game. Some characters are entirely likeable; I consider Chuck, a mellow, guitar-playing hobo that acts heroically to save people he hardly knows, to be overwhelmingly so. Yet most contain flaws, and clash with each other through this, yet act redeemable at certain stages. 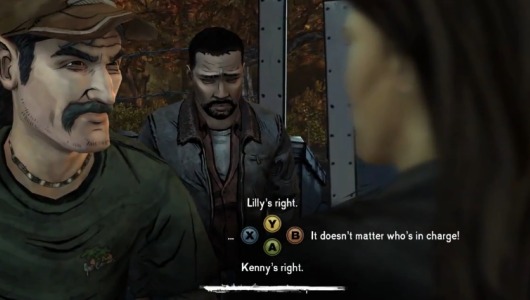 This is why choices over their fates can be fiercely encumbering. This game has a huge deal to say about decisions, namely that often, when you’re under pressure and running out of time, there’s no clarity. There’s no best choice, a most decent and good option; there is always a conscious burden that can be empathized with very strongly.

The emotional aspect of The Walking Dead is by far its greatest accomplishment, one achieved through the hard-to-imagine tragic elements that this nightmarish societal meltdown brings. In Episode Three, a character that expressed care and interest in Lee beyond the simple survival relationship that develops out of necessity, is shot. This moment was hugely unforeseen, one that left me stunned to the mercilessness of the fellow survivor that had held the gun. Worse still, my efforts to replay this chapter to avoid the same outcome proved pointless; this death is inevitable. The Walking Dead reveals the impossibilities in avoiding casualties, especially when living is the only thing you have going for you.

Throw in a few moral dilemmas and increasingly hard choices, and you’ve found a game that you can’t help but invest a great deal of yourself into. Your own moral stance is reflected in Lee’s actions, and you have to consider how you might react to the problems that arise; some issues that are quite horrific. Graphically you’re protected somewhat by a 2D art-style that maintains a link to the original The Walking Dead comic series, of which the game is based on. However, some scenes are mightily uncomfortable to bear, something I experienced to a strong degree in Episode Five, which I completed in one sitting as it contained plot points of huge intensity and . The content gets darker; self-amputation becomes an imminent option to one major character, a decision that painfully echoed for me after the impact of losing an arm horribly affected this character for the rest of the game. Yet with further extremities comes deeper emotional entanglement, the likes of which have resonated more strongly for me than in any other game.