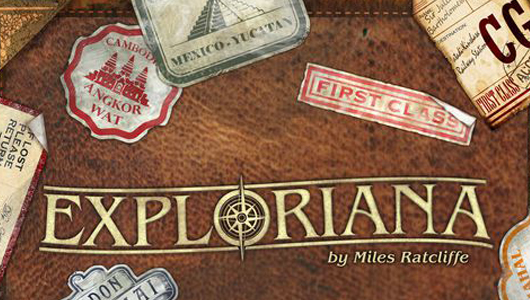 Exploriana is a game of set collecting with push-your-luck and bidding mechanics that is currently on Kickstarter. Set in the late 19th century, players are explorers traveling to wild and perilous parts of the world in pursuit of renown and fortune.

For the majority of the game, players will be sending their tokens to three available locations – South America, Africa, and The Far East – to try their luck at picking up cards. As one can imagine in a set collecting game, every type of card generates victory points in a different way. For example, animal cards are simply worth 1,2 or 3 victory points, maps get progressively more lucrative the more map cards a player picks up, orchids give 9 bonus points if all three different colours are collected and so on. However, this would not be a game about exploring the dangerous unknown, if the cards were easy to come by. Here is where the push-your-luck element comes in. As a player turns over cards, one by one, from the deck at their location, they have to look out for the hazards signs on the cards. Revealing three of the same or three different hazards would make the explorer get lost, meaning they would not get any cards from that location. 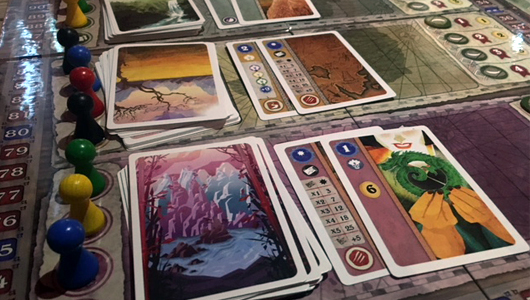 This mechanic fits very well into the game, not only because it is thematically appropriate, but because it spices up a rather mundane step of picking up cards. However, to those who prefer strategy over luck gameplay, it will not escape that a lot in Exploriana is left to chance. However, while normally I would also lean towards a more strategic approach, here, the luck elements frame the tactical decisions nicely. Players can stop exploring at any time, taking a card they need. However, there is always a temptation to try to turn over all five cards as it allows a player to pick up more stuff at once. There are also tools available to avoid some of the hazards, for example hiring a guide to cover one of the hazard signs.

There is another type of card, items, that players can pick up during the action phase of the game. Some of them give players special actions, for example, a Parcel allows players to look through the top cards of each region deck and choose one. Others, help to maximize the point value of a particular set, for example, the Dodo card gives one extra victory point for each set of two animal cards. Finally, there are also cards that make completing sets easier, an extra map card or an orchid card. 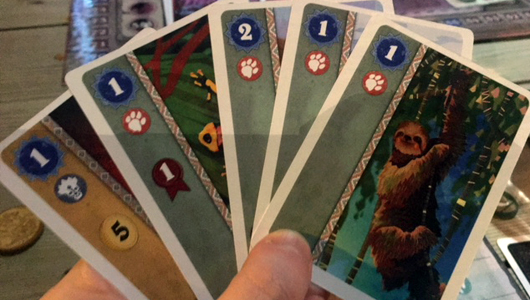 While the randomness of exploration phase worked for me, the auction phase was less successful. First of all, calling it an action phase is confusing, especially when explaining the game to first time players. Mainly, because it is not really an action. Players only get to bid once, with the player ahead on the renown track (note: not the same as victory point track) starting the bidding, and then proceeding in the diminishing renown order. Meaning, that the first player, who set the price for the item, is always at a disadvantage compared to the last player, who knows what everyone else around the table is prepared to pay for the item and therefore can easily outbid them. Personally, the term auction implies to me an unlimited number of offers, until someone cannot be outbid anymore.

However, that nit-pick aside, the items cards are very powerful. However, what can be frustrating is seeing a point multiplier card, as the aforementioned Dodo card, come up at the end of the game when there is very little players can do to take a full advantage of the powers of that card. 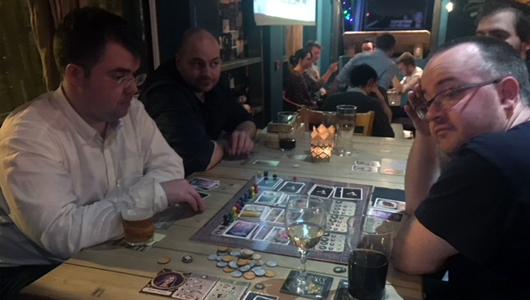 As I received a prototype of Exploriana, I cannot speak about the quality of the game’s components with the full authority. However, even in the prototype copy, there is a good range of components with tokens, cards and a board. The artwork looks very pretty and fits well within the theme of the game, emulating the style of the time without looking too dated. Furthermore, I always like to acknowledge a nicely written rulebook, especially since I encounter so many convoluted ones when reviewing games. Exploriana’s design team did a good job of explaining rules clearly, without unnecessary elaborations or superfluous flavour text.

Finally, while all players get different explorers – with artworks unique to that explorer – they have no special powers and the cards act simply as the reminder of actions available and the scoring options at the end of the game. I can easily see that changing, with asymmetric powers that could add another dimension and a new strategic angle to the game.

I enjoyed my time discovering the secrets of Exploriana. While it has quite a few different mechanics, they mix well together overall. The push-your-luck mechanics are the crown jewel of the game, and the exploration phase of the game is both fun and challenging. For more information about Exploriana, please check out its Kickstarter campaign here.