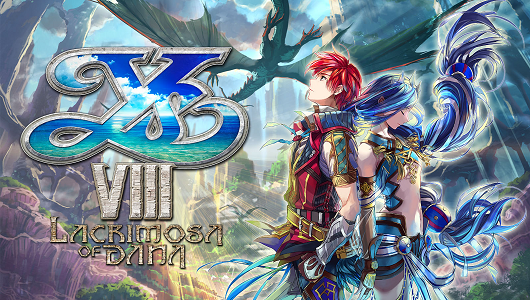 First announced in 2013, Ys VIII: Lacrimosa of DANA is finally out and for fans of the action RPG genre, the series’ first foray into full 3D is totally worth the wait.

Taking control of Adol Christin, an adventurer traveling across the sea to the continent of Eresia, you must explore the mysterious Seiran Island after the ship he was traveling on, The Lombardia, is destroyed by a huge sea creature. But there is more to the island than it seems. While Adol sleeps he dreams of a young Maiden named Dana who lived in an era long ago. As the game progresses Dana’s story is unveiled these two timelines come together and the secrets of the island’s past are slowly revealed.

Shortly after washing up on the shore Adol meets with a couple of other castaways and is tasked with finding others who might have survived the attack. The survivor’s base camp is called Castaway Village and has all the mod cons you’d expect from any RPG village, including a Smithy for Weapons and Armour, a Tailor for Accessories, and a Doctor for Medicine once the relevant castaways have been discovered. As everyone in the village is working together to get off of the island, weapons, armour, and medicine, etc. are traded for materials and items instead of cash. And if you’re a few items short of a new sword there is a Trading Post where you can swap materials for those of a higher or lower rank. Materials are found by scavenging the various harvest points dotted around Sieren Island, defeating enemies, and as quest rewards. And believe me when I say you need as many as you can get.

There is a bulletin board in Castaway Village where side quests can be found. Completing quests gives you a reward and improves Adol’s reputation which is absolutely vital if you want to see the true ending. There are several small stories and dramas that happen within Castaway Village that range from entertaining to genuinely harrowing. The more time I spent with the characters the more I found myself caring for them, much more than I usually care about NPC’s.

Parts of the island are inaccessible until a certain number of villagers have been found, or a specific piece of equipment (called Adventure Gear) has been acquired. Adventure Gear grants Adol abilities when equipped, such as climb and double jump. This gives the game a Metroidvania feel as I was constantly compelled to explore areas I couldn’t reach earlier, usually leading to more treasure or castaways, which in turn opened up more of the island for me to explore. 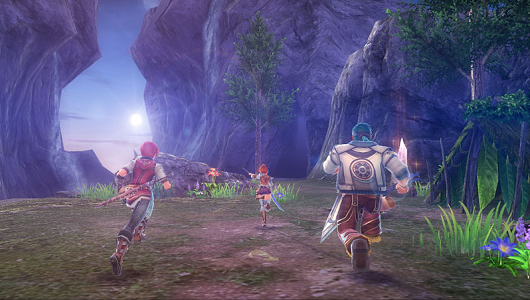 The island is absolutely huge, and I found the layouts of the different maps a little confusing at first as I was constantly rotating and switching between them to try and get my bearings, but soon enough it became second nature. Luckily there are crystals dotted about the place that heals your HP and act as quick travel points, making traveling around the island much more manageable.  Certain areas of the island are classified as dungeons, which are usually in the form of giant caves, jungles, or ruins, and there are usually a couple of bosses waiting within them. Traversing dungeons is the same as exploring the island, only you can’t take advantage of the game’s field healing mechanic which allows you to regain HP and recover from status ailments by standing still for a while.

The combat is delightfully simple. X attacks in real time, and holding down R1 and pressing one of the face buttons triggers a Skill. Skills do more damage than normal attacks and use up SP when executed. Striking enemies with normal attacks will cause SP to recharge, so switching between normal and Skill attacks is the key to victory. Skills level up the more they’re used, and new skills can be equipped in the menu. Landing Skill attacks will also cause the Extra gauge to fill up, and once the gauge is full pressing R1 and L1 unleashes a powerful combo attack.

You can lock on with triangle, jump with circle, and evade with L1. Holding down L1 while moving lets you run a bit quicker, and evading just before an enemy hits you will activate Flash Move, causing time to slow and granting you invulnerability for a few seconds allowing you to inflict extra damage. Similarly, pressing R1 just before an enemy attack lands will activate Flash Guard, causing the SP and Extra gauges to fill up and all hits to become critical for a short time. Mastering each isn’t essential as regular dodging works great, but I’d be lying if I said I didn’t feel like a bad ass each time I successfully pulled off a Flash Move/Guard.

Your party can have up to three active members, and each member has a different attack type – Slash, Pierce, and Strike – and certain enemies are strong/weak to each. Attacking enemies with their weakness will cause them to Break, making them stunned for a few seconds and allowing you to inflict higher damage. Pressing square instantly switches control to a different party member allowing you to take advantage of their attack type. This adds a bit of strategy to each battle, especially against stronger enemies. Killing enemies rewards you with items and experience points, and I experienced absolutely no grinding as my characters were regularly levelling up as I was exploring the massive Island. 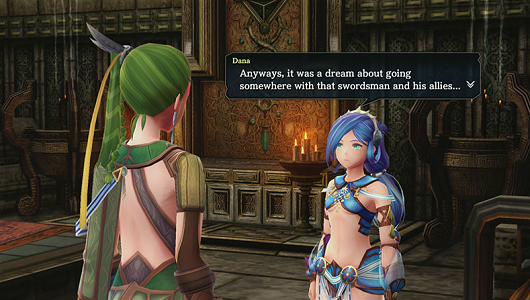 A huge part of the story focuses on Adol and Dana’s shared consciousness. Dana’s actions in the past will affect Adol in the present. For example; planting a sapling as Dana will create a tree for Adol and his party to climb, giving them access to a previously inaccessible area. These situations are mostly scripted and need to be done in order to move the story forward, but when playing as Dana I found several extra events that also had an impact on the present, usually leading to more treasure or unseen parts of the island.

Dana comes with her own side quests, such as helping townsfolk or freeing fairies, increasing her virtue, enhancing her statistics, and even giving her new battle styles. Similarly to the character switching in Adol’s era, pressing square allows Dana to switch between three styles, affecting enemies differently, and each with their own strengths and weaknesses. There’s also an optional dungeon to explore that utilises all of Dana’s powers and abilities and uncovers even more backstory. I feel like I’ve said too much already, so I’ll leave the rest for you to discover on your own, but believe me when I say it’s totally worth it.

There are numerous distractions and mini-games too, such as Interceptions and Suppressions which see Adol and the villagers fight off wave after wave of monsters under varying win conditions, and fishing, because this is a JRPG, and you can’t be a JRPG without a fishing game. It’s also possible to revisit previously defeated dungeons at night for more of a challenge and rare materials, as well as numerous landscapes and treasure chests to find. There’s enough here to keep completionists busy for a seriously long time. 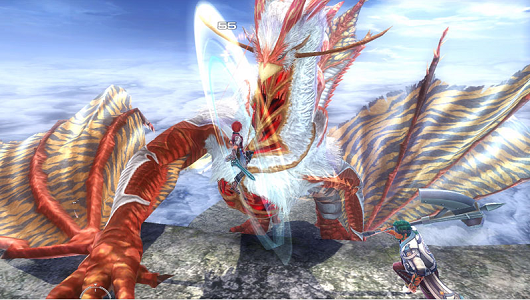 Graphically Ys VIII looks good. At its core it’s a Vita game, so looks basic when compared to other games on the system, but the HD textures and little additions to the scenery do a great job of making the world of Ys VIII feel more alive. There were times when I’d turn a corner and be blown away by some incredible scenery. It’s vibrant and colourful, and the variety of different areas to explore keep Seiren Island from ever getting boring. It has that Japanese anime flavour, so the characters are colourful and well designed.

English voice acting is your typical anime style VO, which is fine and suits the game, but it can be quite cheesy and laughable at times. At one point one of the characters started talking in Japanese where the devs hadn’t put the English VO in, which was odd. Weirdly, there is no Japanese voice track available for the PS4, even though there is one for the Vita. That being said, literally moments before submitting this review I checked the official Ys VIII website and Takuro Yamashita, President and CEO of NIS America, Inc has issued an apology for the quality of localisation and went on to explain they are currently giving it a complete overhaul which will be available in a patch sometime in November (click the link below for the full statement).

The music is good but often misplaced. It’s that kind of upbeat anime style J-Rock with guitars and synth, which is fine when you’re in a boss battle, but when running through a meadow it’s kind of off-putting. There were other times where more dramatic scenes had this super happy music playing over them which completely took me out of the moment. I was ready to write the music off completely, but listening to the soundtrack while writing this review convinced me otherwise. It’s a great soundtrack, just used badly in places.

I absolutely loved my time with Ys VIII: Lacrimosa of DANA, and highly recommend it to anyone looking for a solid action RPG on PlayStation 4. And don’t worry about coming into the series too late. Ys VIII is the first Ys game I’ve played and is a completely self-contained story so no knowledge of the series is needed at all. If you’re looking for fun and frantic adventure for the PlayStation 4 you can’t do much better than this.