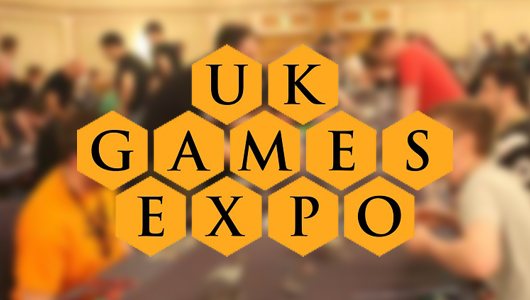 After so many board games we needed to hire a carrier mule, to bring back all our new tabletop goodness. Following all our lovely chats and meetings with the wonderful people of the show and after maxing out our step goals in half a day – even though we’ve been mostly sitting down to play, the last day of UK Games Expo has arrived.

You can check out our diary entries for the games we played throughout Day 1 and Day 2 but here is a round up of the last day on the show floor: 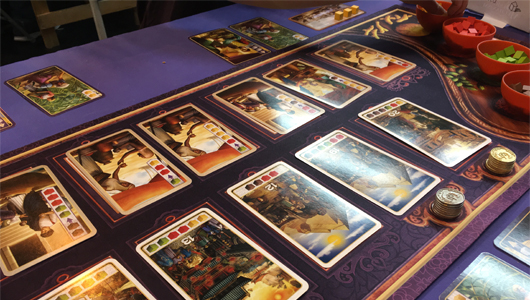 –
A game I had been told to look out for at this year’s UK Games Expo, especially as it was having it’s soft launch at the show, with a limited amount of copies available to buy. I wasn’t lucky enough to get one in time but fortunately, Esdevium had plenty of copies out for a demo and our friend Matt from Creaking Shelves had a German copy that we played a few more games after the event.
–
I’d heard from numerous sources that the game was similar to Splendor and while there are a number of similarities between the two, Century: Spice Road has enough differences to be very much its own thing. That said, I can easily see how fans of Splendor will be drawn to this.
–
Each player starts with a small number of spices, represented by wooden cubes, and two cards; one that gains you more of the lowest spice resource and one that can be used to upgrade your spices. You can then purchase more cards that are either used to upgrade, trade or gain more spices. The furthest card along can be purchased for free but any card from the pool of six can be passed over as long as you deposit one spice per card that you pass. This results in any card that is repeatedly passed over becoming increasingly valuable. Added to this are a number of victory point cards that can be purchased for the requisite spices. These cards also get more valuable when passed over as the farthest two spots get a single point silver coin and a gold three point bonus. The first player to gain five of these cards triggers the end of the game but the winner is the one with the highest point total.
–
The game feels well balanced and you need to adjust your tactics on the fly to best suit the spice gaining engines you can build and the currently available victory point cards. There is an element of luck to what becomes available on your turn but you can partially negate this by paying to gain early access to a card that is particularly valuable to you. Nicely presented with suitable artwork and spice bowls to hold the spice cubes in. Strategic fun for a variety of ages for up to five people. You should look to journey the Spice Road on release later this year.
–
Qwirkle (Alex)
– 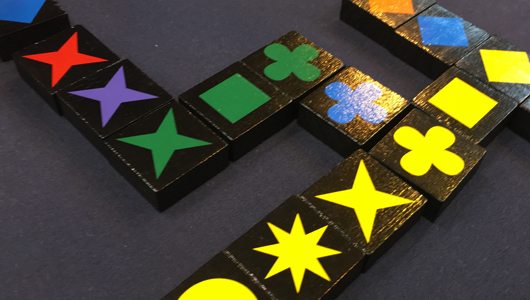 As a board game critic and enthusiast, I’m embarrassed to say that there are some games I’ve not played. These games are underpinning the current board game revival. Confessing that I’ve not played them, would probably be similar to a film critic confessing that they haven’t seen The Godfather… pretty embarrassing. So [deep breath] I never played Qwirkle!  Until UK Games Expo that is! Wow, it felt good to get that off my chest.

Qwirkle is a colourful, more sophisticated child of Dominoes. Players place blocks of a single matching attribute, colour or shape, and score points depending on a number of tiles. If the player manages to complete a line of all six shapes and colours, that is called a Qwirkle and awards that player additional six points. Easy to learn, fun, competitive and brain tickling. If you don’t believe me, then here is an episode of Tabletop with a playthrough of Qwirkle for you. 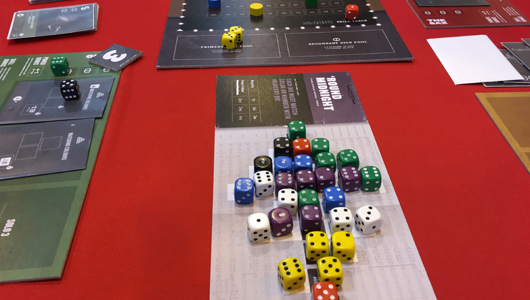 Returning to the Playtest UK section, we trialled game that – I will confess, has not enthused me to start with. The Gig is a game about a Jazz band, a topic that I am very indifferent to. After I played the game, however, this has changed for the better, so much better!

In The Gig every player is one member of the band, be that a drummer or a saxophonist. Together they are all playing one song, but they also want to show off their skills and have amazing solo’s to enthuse the crowd.  If the crowd gets bored with the performance, that it is game over and everyone has lost. However, in order to win the game, the players all must successfully complete one song and the player who gets the most points for their performance wins. As you can see from this description, the game has both competitive and co-operative elements to it and I love how these elements fit into the overall narrative of the Jazz band concept.

In essence, The Gig is a dice drafting game. During their turn (the turn order is decided through a bidding system) a player can either pick up two dice and place them or pick up one dice, change its value and then place it. The player can place die either on their solo or on the song. If the layer is being too narcissistic and working too much on their solos, but not enough on the song, the crowd gets bored, and vice versa. Both solos and songs have their rules of placing die, for example, die have to be the same colour or all die have to be of different numbers, and so on. There are several different songs already designed, all with their own sets of rules.

I think this is a brilliant dice game, that with minor balancing adjustments, will be a must buy for me whenever it gets published. Judging by the attention this game was getting during our playtest, I am not alone in thinking that! 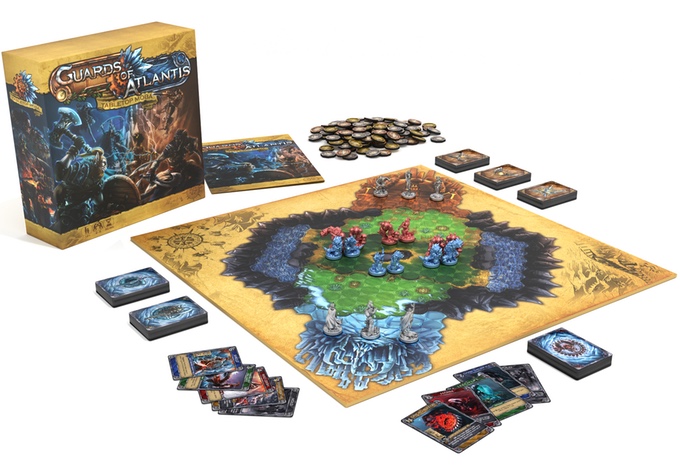 –
Lots of Tabletop games seem to be looking at recreating video game experiences lately and while I have seen a fair few tackling first person shooters and other genres, this is the first I have seen looking at representing a MOBA. Obviously, the “O” part standing for “Online” is out of the window but I am glad to see that Wolff Design is looking to definitely bring the “Multiplayer” to their “Battle Arena”. While the game can be played with 2–6 people on one side of the board, the reverse offers up to 11 players in total – with the odd number being down to one hero character being able to be split between two players.
–
While it does not hold a popular licence such as League of Legends, it feels that this may help it be a better board game without restricting it to being a slave to following in an established universe. However, it does have most of the trappings of the mechanics that you would expect to see. There are lanes to push, minions to dominate and heroes to help conquer and then level up. Combat takes place via cards that are laid face down, then revealed simultaneously and resolved in initiative order. The cards themselves have really nice artwork and the miniatures look great – with one side’s Heavy Minion looking like a steampunk Big Daddy (and yes that looks as awesome as it sounds.)
–
With some nice variant rules and an adaptable number of players, it should give you a number of reasons to get this MOBA on your Tabletop. (Spoilers: If still not convinced you can come and play a copy at an upcoming Tabletop Tuesday event and see for yourself.) 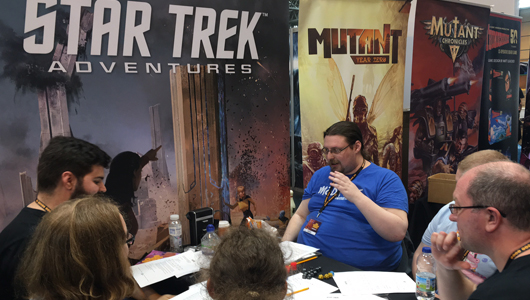 It is exciting time for the lovers of RPGs and miniatures, especially since publisher Modiphius Games have you covered on all fronts of the RPG spectrum.

Let’s begin with a new hotness, Fallout: Wasteland Warfare, a miniatures RPG, which I am sure will make a lot of lovers of the game, especially Fallout 4, very happy. It seems only natural that a video game RPG, will be transferred to an RGP in its tabletop counterpart. The game is running on a new system and will contain co-op modes, player-versus-player skirmishes and solo play in story driven missions. The story, while not repeating the narrative in the games, will be the snippets of the events from them, including events you might have heard about while playing the video game. The stories and characters from other Fallout games will be available through expansions. Now onto, the most good looking part of the game: its minis. While they were hidden under lock and key during the expo, I was kindly shown a small preview and let me assure you, they look great. The figures will, of course, include Deathclaws as well as Brotherhood of Steel soldiers, floating Eyebots, humans, Dogmeat and more.

Star Trek Adventures (shown above) was much enjoyed by those attending the show. It is written by New York Times bestselling Star Trek author Dayton Ward and is the first official Star Trek roleplaying game in more than 10 years. However, the game that immediately caught my eye was Tales from the Loop. It had an incredibly successful Kickstarter campaign and will definitely fit in well with the lovers of Stranger Things. Players are teenagers from the late eighties, who are solving mysteries connected to a Loop, world’s largest particle accelerator. While teenagers are saving the world, they also have to deal with oblivious parents, never-ending homework and bullying at school.  The rule book is absolutely gorgeous and the universe sounds incredibly interesting, so go give it a look.

There we go! That’s mostly it, except that we will have more board game reviews from the expo coming shortly and, of course, a lot of UK Games Expo goodness may or may not (ok, spoiler, definitely may!) be featured on Tabletop Tuesday!