Dead of Winter: The Long Night is a standalone expansion to 2014’s award-winning zombie survival horror game, Dead of Winter. Each aspect of the zombie apocalypse is represented (scavenging, equipping characters, fighting zombies, feeding survivors, curing wounds, keeping morale up, etc…) to great immersive effect, though at the cost of a bewildering mess of tracks, counters, locations, tokens, spaces, cards, decks, and so on. But none of this complexity matters much, because the designers of Dead of Winter: The Long Night understand the heart of the zombie genre: how difficult it is to trust other people, and how vulnerable that makes us feel. This is not a game about solving a puzzle, but about how hard it is to overcome even the simplest problems when you don’t trust your neighbours. This is not just a zombie-skinned board game; this is a zombie survival horror game.

Dead of Winter: The Long Night adds several major new mechanical pieces to the base game, which are optional and modular, as well as new characters, locations, crises, and Crossroads cards. It is fully playable as its own game, replicating the mechanics, but not the content of the original – an alternative starter set of characters and events, plus a few new elements, and a pair of optional modules. There are refinements of existing mechanics: wounds of despair that can’t be healed with medicine; explosive barricades that kill zombies when breached; unruly survivors who demand extra food and attract extra zombies; and a new mechanic for building improvements to the colony. The new characters are notably diverse, including gender balance in a wide variety of roles, broad representation of ethnicities, body shapes, a disabled character, and a chimpanzee, who is adorable, absurd, and just a little overpowered, much like Sparky the Stunt Dog in the base game.

The game is a semi-cooperative game of moving characters around multiple locations, reminiscent of Shadows over Camelot, or Battlestar Galactica. Players must cooperate to accomplish a series of common goals: one overall scenario objective for the game, typically to accumulate a bundle of items scavenged from the surrounding areas, and a per-turn crisis that must be resolved by collectively contributing items. Moving locations requires rolling the exposure die, which may wound or even kill a survivor, unless they expend valuable fuel to make the trip safely. As you scavenge, the map begins to fill with zombies, and decisions become more fraught. Characters get wounded, or even die. Helpless survivors accumulate under your care, and need to be fed – or not. Morale must be kept above zero, but player mistakes, random events, and tempting opportunities to trade it away make this a serious challenge. The drama of uncertainty is highlighted by the Crossroads card mechanic, which activates a flavourful and potentially game-changing event when a contingency is met on a player’s turn. Some of these are dark and dramatic, others are lighthearted, with absurd situations or entertaining pop culture references. The Long Night pushes this even further than the base game, with a series of optional, mature-themed cards to emphasize the grim survival horror theme. 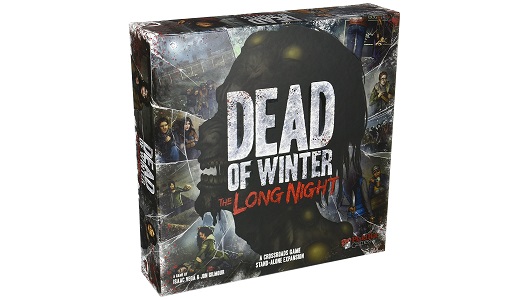 Every player is also randomly given a secret goal at the start of the game, which they must fulfil in addition to the overall colony objectives to win. Balancing priorities and managing resources will raise tensions and start arguments among players, especially with the potential contradictions between individual and group goals. But the real heart of Dead of Winter: The Long Night is the traitor mechanic. There is a chance that one of the players’ individual goal cards is instead a “betrayer” card, with a much grander, and eviller objective. They must attain their relatively ambitious goal through subterfuge, then drive the colony’s morale to zero. Not every game will have a betrayer, and the chance is adjustable to the desired difficulty level. In some games, players will quickly converge on mutual trust; if they are correct in guessing that there is no betrayer, the game may offer some  mechanical challenges of the Pandemic variety, scrambling to keep all the various loss conditions from triggering through careful triage. But if they’re wrong, then the betrayer can turn things around very quickly indeed – leading to failure, and, in my experience, more memorable games.

The main new additions in The Long Night are two modules: The Bandits, and Raxxon. The Bandits module creates a second, competing group of humans, who fill spaces at locations, and who scavenge for resources to bring back to their lair, which can then be raided for supplies. Exiled players can also become the bandit leader, a helpful option for keeping exiled players involved in the overall drama. The other addition is Raxxon, a spooky abandoned pharmaceuticals lab with a suggestively ambiguous relationship with the zombie apocalypse. (On a roleplaying note, Raxxon also breaks the game’s otherwise clean archetypal feel, by providing a specific named company, which feels out of place in the otherwise generic zombie winterscape). Searching Raxxon provides powerful technology, and game-altering pharmaceuticals with random enduring effects, but also means an extra level of hazard, requiring a roll of the dreaded exposure die. Raxxon also produces an extra crisis each turn, requiring players to spend their valuable action dice to prevent dormant experiments from running loose. If a Raxxon crisis if failed, unique zombies spawn, each with their own abilities and flavour text. The design and flavour of the zombies is uniformly excellent. Alas, this is somewhat muted by the mechanics: the special zombies are quite difficult to kill, but surprisingly easy to ignore.

I found that the additional modules and mechanics neither add nor detract much from the game experience – which is not as harsh as it sounds, given that Dead of Winter was already a very high quality experience, but it may diminish its value to those buying the game as a pure expansion pack. Partly, this is because the modules and new mechanics are extras rather than fundamental changes to the core mechanics. Partly, it’s because the game was already heavy on mechanical complexity, and the additional fun is muted by the burden of additional rules. But mostly, it’s because the game derives its value from immersion rather than mechanical elegance, and the new features mostly change surface details, rather than the tension-building social elements of the game. 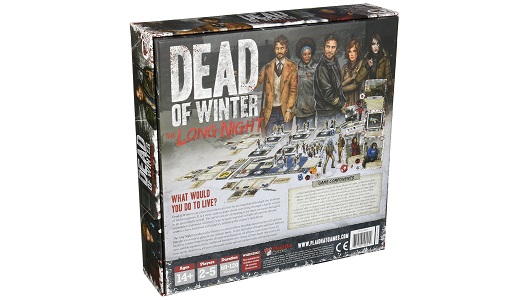 Games with a traitor are almost invariably better than games without, though the uncertainty itself is valuable enough to recommend against guaranteeing a traitor. The game is designed for 2-5 players, and anywhere from 3-5 yields an interesting play experience. The two-player game, however, is notably disappointing. The game’s success in harnessing the fear, vulnerability and paranoia of the zombie genre evaporates almost immediately when the traitor mechanic is removed. With a guarantee that you can trust your companion, it becomes a dry exercise in cooperative puzzle-solving, and the game’s mechanical overcomplexity becomes dull. I suspect (though did not test) that this is the same in “cooperative variant” games with more players. Dead of Winter: The Long Night is a fantastic semi-cooperative game, but as a pure cooperative experience, it loses its dramatic tension, which is the game’s greatest strength.

Dead of Winter: The Long Night is not an easy game to set up, nor explain to new players. Leave lots of time for this one if you’re learning it for the first time, and try to find a quiet space to play. There will be lots of talking. It is also a bit of a chore to keep track of as you go along, with a complex upkeep phase involving adding zombies, feeding the colony, adjusting the morale and turn tracks, and so on. It can be easy to miss something, especially for newer players, and these mechanics can have game-altering consequences. I’ve genuinely hated other, similar games for less sprawling mechanics than this. (Battlestar Galactica, I’m looking at you.) Adding The Long Night and its extra modules could be too much for newer, younger, or more casual players. The game is surprisingly resilient against this complexity due to its robust, immersive theme, and succeeds in keeping players’ attention.

If you’re chewing your nails down to stubs trying to feed a dozen ungrateful wretches back at the colony, if you suspect your creepy neighbour is secretly hoarding guns and medicine, and if your best friend died from frostbite following the advice of some jerk who eventually betrayed you all, then you’ve gone past twiddling with mechanics into something much more interesting. Dead of Winter: The Long Night, like its predecessor, delivers genuinely shocking moments you’ll be talking about for days after you stop playing, and provides a unique and gripping drama each time you play it. For that, it’s a game I strongly recommend. Buying this instead of the base set offers much the same experience for new players, though the extra mechanics should probably stay in the box until after a learning game or two. If you loved the original but played it to exhaustion, this might be rewarding, if expensive, as an expansion pack.