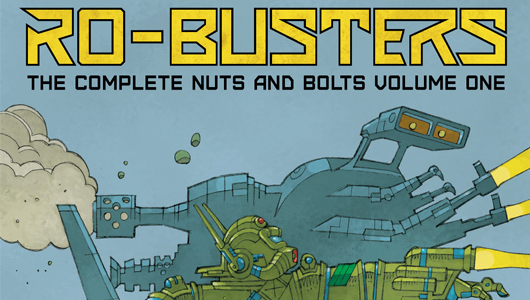 Imagine a Thunderbirds comic, now swap multi-millionaire philanthropist Jeff Tracy with a greedy cyborg with telephones in his chest called Howard Quartz, swap the Tracy kids for a bunch of misfit robots and Tracy Island for a disused prison. What you have in your brain now is probably pretty close to 2000 AD’s Ro-Busters.

The 1970s were the birth of many things, from video games (with the invention of Pong), portable music (in the form of the Sony Walkman), the mobile phone and even email (Has anyone else noticed that the 1970s invented the iPhone?). Somewhere amongst this era of innovation, and inspired by a wave of science fiction films such as Logan’s Run, Death Race 2000, and Star Wars, publishing house IPC Media began short lived science-fiction comic Starlord and it’s better known sister publication 2000AD.

Ro-Busters the Complete Nuts And Bolts: Volume 1 collects 11 stories originally published from 1978 onwards in Starlord and then, after the two comics merged, 2000AD. Opening with the Ro-Busters’ origins as rejected robots rescued from destruction by Howard Quartz to form part of his for-profit international disaster response team, the book goes on to show the Ro-Busters rescuing people (or “humes” as the robots refer to them as throughout) from collapsed tunnels, crashed aircraft and even nuclear bombs. 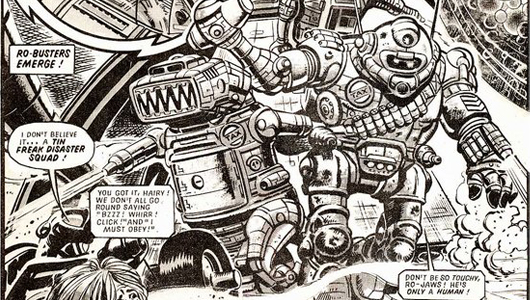 It is all stirring high-drama stuff but does suffer rather from being written in the 1970s. Almost everything about these Ro-Busters stories feels incredibly dated, from the clunky use of the narrator to the characters explaining everything they are doing as they do it. Frequently Ro-Busters uses both of these old-fashioned devices at once and they both detract from the story-telling.

The quality of art is very important to the reader’s enjoyment of any comic book and in this regard Ro-Busters does not let us down. Ro-Busters the Complete Nuts And Bolts: Volume 1‘s art is often a little overly busy as so many panels are crammed onto the page but each character is clearly rendered and, when the art is given a chance to breathe, it can be truly beautiful. We even see the occasional story drawn by the legendary Dave Gibbons (best known for his work on Watchmen). 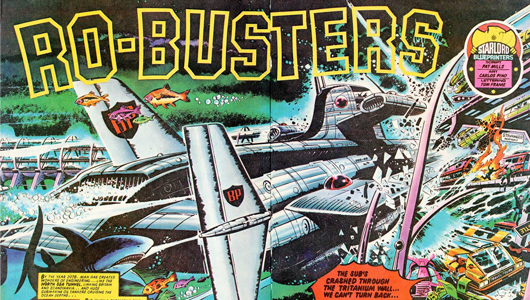 What frustrated me the most about this book was the world-building. The world of the Ro-Busters seems to be so fully realised and yet it is frustratingly inconsistent. One minute robots are programmed to be unable to disobey a direct order or harm a human being, then pages later one of the main characters, after serving time in a robot priston, is supporting a robot rebellion intent on insurrection. In the story Death On The Orient Express there is insufficient oxygen available for all of the humans to survive (for reasons that do not make a great deal of sense) and so the robots decide that they will decide who lives and who dies. And yet later on in the story the plot relies on robots being compelled to protect their human owners.

Towards the end of the collection we are given an insight into two of the main characters’ back-stories. The best of these is Hammer-Stein’s previous life as an experimental military robot in the Volgan War. It is not hard to see why this setting was spun off into the long running ABC Warriors. The story is compelling, with Hammer-Stein not only having to contend with the (thinly veiled analogue for Soviet Russia) Volgans but also overcome prejudice from his robophobic human allies. It is classic war comic adventure and social commentary without either detracting from the other.

Ro-Busters the Complete Nuts And Bolts: Volume 1 is a fun read but little more than that. The style improves through the book but the more it seems to play with big ideas the more it fails to tackle them. If you are a Ro-Busters or 2000 AD completest then this book is for you, otherwise I find it hard to recommend.