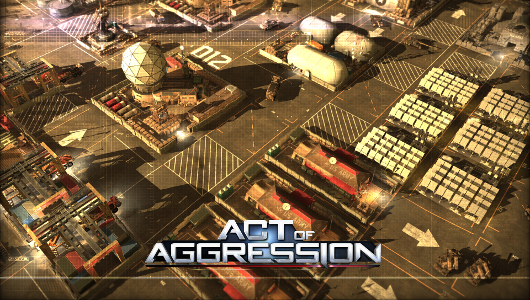 In the Real Time Strategy slump, Eugen Systems and Focus Interactive look to right the wrongs of the past few years and ignite a new era in the Real Time Strategy genre for expectant pc players. Fans have been crying out for a new entry in the genre for years now, with sub-par entries and out the box gimmicks getting in the way of true progress or perfection of the tried and tested methods. The only question left to answer is this; is Act of Aggression the saviour?

I’ll preface this review with a secret I keep from my battlefield opponents, I’m not a great RTS player. I’ve got experience with the Dawn of War games, Total Wars and more. I’ve never made the jump to Starcraft as it scares me quite frankly. The pacing, macros and bindings all frighten me when looking to jump in. I’ve never been competitive with people other than my friends, although we probably took it far too seriously than we should have done. It’s important to remember that this review is coming from a very “beginner” viewpoint.

Being a new player I went looking for a tutorial, when I couldn’t find a dedicated tutorial mission I went diving into the skirmish section. The map choice is decent however there aren’t many tweaks you can make to change the experience. The good choice of maps helps with what type of skirmish you want to play and how you want to control the map. The other consideration is whether it’s a free for all or team based. There is enough here to keep you coming back for different skirmishes with the only concern being that  currently there are three factions. This means there will more than likely be repeating units on different teams should there be a multiplayer war.

The concern about the three factions is negated somewhat by the varied play styles each offer. There’s a lot of unit variety and great variations in upgrades, base advancement and battle progression. The US don’t perhaps have as much versatility as the other two factions but you can build a very big and varied army which can hit hard on bases and individual battles. The issue can arise where the US’s lack of versativity can be caught out if they don’t have sufficient back up so can lose those smaller fights around the map, while kicking butt at the main base. The Cartel are completely different, fuelled by powerful people with lots of money. They’re a stealthy bunch, and cost extra for the privilege, and the stealth element isn’t a problem as it’s counterable. It doesn’t feel cheap to be stealthy as if countered, a backup plan will be needed. Chrimea are a blend of the two, they can be versatile and can counter most situations, should they be upgraded correctly. 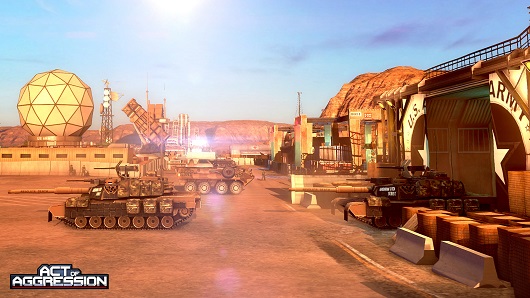 Stripping all of the tactics, factions and strategies back, the core game works – for the most part. Difficulty is scaled well, I dropped to very easy quite early on as AoA definitely has a learning curve. There are five other levels of difficulty for you masters of game out there.  There are a couple of things within the gameplay that I’d have liked to have seen but it’s fun to play. Battles are frantic, fast and stressful. For me, it’s difficult to manage my army while switching back to base and doing my upgrades and re-supplying the front line. Speaking of the idea of a front line, it doesn’t really exist. Altercations on the battle usually take place in “choke-points” on the map. These can either be buildings like banks (ways of gaining some additional resources) or refineries you build across the battlefield to gain oil or aluminum for army expansion. Whether it was me being aggressive, or my enemies trying to control the map, several of these choke points popped up, causing these isolated battles across the entire battlefield.

These areas of the battlefield allowed for the fortification of your position, meaning you weren’t always fighting out in the open, especially with particularly weak infantry. While out in the open, infantry gets beaten down pretty quickly. Using transports is a good way to get them across the map, albeit being a risk in case there are enemies lying in wait. There is no way to use cover for infantry, but they can control buildings and use the vision from within to ambush passing enemies. Infantry don’t seem to be that effective in the grand scheme of things – they do however provide a little bit of support should they be positioned correctly. Within banks they not only bring resources but they can cause damage to vehicles and air support if they have the chance. Some of the buildings don’t provide much cover and can be destroyed quickly with the right attacks, banks however are a little different. 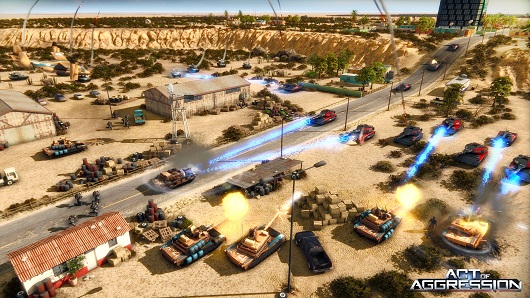 The varied vehicle, air and missile options means that battles can change on a knife edge, being both incredibly rewarding yet punishing in equal measure. With different types of units being effective against certain other units, building a balance is key. Using the collective army across the small battles and the final push on the base can be a tough task. The skilled will be able to use macros to select their special units and keep everything working at a good pace. Me on the other hand, struggled to keep my army balanced and kept having issues with trying to find the right units for the right task. Calling in the air support is easy with the buttons always accessible – especially in cases where you need to react quickly.

Everything in the game controls well pretty well, with more practise I’ll be able to increase the difficulty while learning the small things that will help win battles and control the battlefield. Learning things outside of trial and error can be a pain mind you – the campaign acts as a long and tedious tutorial. I’ve not managed to complete it yet as I’m more focused on playing skirmishes and multi-player (what many consider to be the core game). The campaign has a lot of problems which make Act of Aggression difficult to get into for the more casual RTS gamer like myself. The voice acting is poor at best and the story is a generic string of events which don’t get me emotionally invested in what is happening in this world. Campaign missions escalate and in no way prepare you for what is happening later in the level – leaving me with ultimate frustration as I got to the final stages of a mission only to feel cheated when my forces are overwhelmed and the mission is to extract one unit from the battlefield. The game of course shouldn’t tell you what’s going to happen, but it might have been beneficial to give me a chance to build the right type of army, prompting me to complete small movement and upgrades that would enforce the games core ideas. The campaign is the tutorial but introduces mechanics far too slowly. Telling me that I have an important upgrade available as hundreds of units flood into onto a highway with no defences isn’t a way to help me win. The other issue is that when I did fail, I found myself having to replay the entire mission, losing half an hour or so of progress.

If you’re coming for the RTS experience, it’s probably best to keep to the skirmishes and learn by doing, the campaign takes too long to get to the mechanics you’ll need to know about. There are two campaign streams but nothing is encouraging me to keep jumping in and getting frustrated – it could be down to my skill level, but it’s also that the story just isn’t unique or diverse enough to keep me trying. 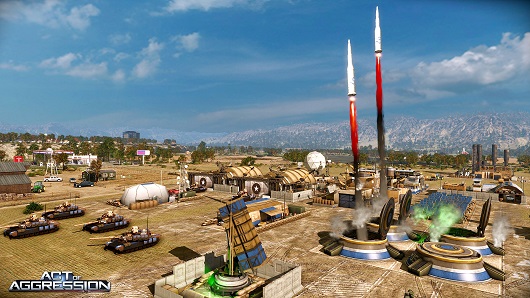 The longevity of Act of Aggression will live and die in the competitive scene. There’s plenty here to like within the skirmish mode and I can see myself being drawn into streams of these intense firefights. The only thing that puts me off slightly is the fear of stalemates. In a 2 v 2 with a friend we found ourselves drawing after an hour or so of battles. We’d eliminated each others partners but found ourselves drawing against each other. There weren’t any moments that meant the fight changed, because by the time we had one a firefight, there was already an army of defences waiting at base. I’m sure the more skilled and competitive players would be able to push past the barrier and win the battle, however it seems battles could go on for hours at a time.

The last thing I will say about the multi-player is that the system of adding friends is a painful task. The menu’s aren’t really set up for finding a friend and then adding them. I got there but it’s not an easy option on the front screen from what I could see. I expect these niggles to get patched in, as while writing the review the UI has already gone through a bit of a rewrite, so hopeful that this gets fixed soon.

Plays Well, Should Be Multiplayer Hit
Engaging Firefights and Skirmishes
Campaign is Generic and Doesn’t Offer Much
Huge Learning Curve
Only Three Factions, Could be Limiting

Act of Aggression is one of those titles where I find myself confused about what score this fits under. The frustrating campaign is more than made up for within the skirmishes, where battles are frantic and firefights pop up across the map. There’s just enough choice and strategic opportunities to keep fans interested, and although it takes a while to get a friendlist set up, playing with friends and others is an otherwise painless experience. There are a few things that from my perspective don’t work, but that’s coming from a new player with not much RTS skill. If you’re new to the genre, Act of Aggression will prove to be a good experience, should you get over the learning curve first.