Destiny: What a Difference an Alpha Makes

While I was never less than enthused by Bungie’s Destiny, prior to E3, games like Batman: Arkham Knight, DriveClub and The Witcher 3: Wild Hunt placed more highly on my most-anticipated list. Despite the numerous previews and videos, not enough was known about what Destiny actually was for me to become fully invested. All of this changed after E3…

At Sony’s PlayStation press conference, more and more was made of the relationship between Sony and Bungie. Seemingly as proof of this, Adam Boyes announced that an exclusive three-day alpha for Destiny was coming to the PlayStation 4 and sign ups were currently live. Like the rest of the Internet, I flocked to the website to register my interest – though unlike some of Bungie’s die-hard fans, my mood that day did not hinge on getting into the glorified demo. Actually, I had received my code for the alpha early in the day on Thursday but decided to play more of the Battlefield Hardline beta, instead of kicking off my download – such was my comparative interest in those games. It wasn’t until later that night when I finally installed and booted up Bungie’s latest that things started to change.

Firstly, I was struck by that familiar, ethereal music from (the now ex-Bungie composer) Martin O’Donnell. It evoked a sense of scale without the need to show an expansive vista or huge game map. I can tell you right now, his input will be missed as this franchise progresses. I immediately created my Awoken character (Bungie are so good at naming things!) and picked the Warlock class.

It was the simplicity of the user interface that made the next big impression. I can only assume I was not alone in fearing that as Bungie had seemingly been aiming for an MMO experience, we would be inundated with menus and stats, as is customary in the genre. Instead, Destiny has one of the most appealing menu systems I have used in months. Every screen displays only the necessary information, allowing you to drill down to get at more stats and figures if required. Equipment is colour-coded for rarity, making unique or expensive items immediately noticeable. Gear is given a single overall rating, easily comparable to other equipment you have. 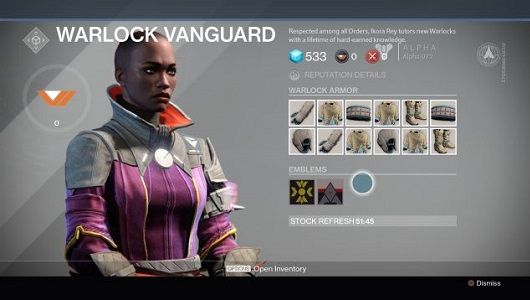 However, it is not perfect by any means. As it is an alpha, I am hesitant to knock it, as these issues may be fixed before release, but the need to hover over or open these equipment screens to see these single-figure ratings is an oversight, as is the lack of a simple binary notification to tell you if it is better or worse than what you currently have equipped.

This hesitancy in judging Destiny too harshly also extended to the in-game visuals. While no slouch in terms of visual fidelity, the frame rate appeared to be all over the place for me – especially in the open sections of the Old Russia map. Regardless, I ventured on and was immediately hooked by the combat system. The weapon designs were fairly standard but the immediacy of the damage inflicted, as well as the level of each enemy made each encounter a joy. You knew exactly who to use heavier weapons on and you knew who could be ignored and left for later in the fight. 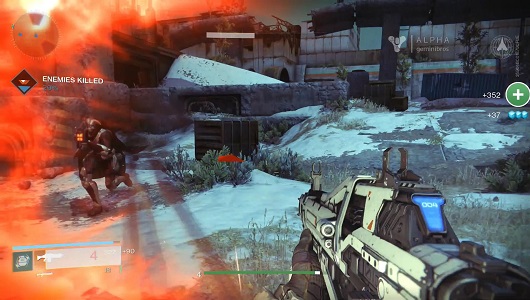 Your companion, Ghost, voiced by Tyrion Lannister himself Peter Dinklage, guided me to my next objective seamlessly. Dinklage’s performance may have been a low point for many, with a rather flat performance – but he did give us a line that will live in gaming culture for years. After completing the first tutorial mission, I was given free rein to do as I liked. Immediately I visited the Tower, the game’s community hub. Everything was laid out in such a way that navigating the rather large area became child’s play after a few minutes.

The final aspect of the game that sold me on it was the available Strike mission. These are cooperative levels which can be tackled by a party of three friends or using the game’s matchmaking service. My first play through was with two random strangers but the experience was not diminished by this. The mission design and game mechanics made team work beneficial for all. Throughout the mission, we were tasked with overcoming powerful boss characters and waves of ever more intimidating enemies. Working together and developing unspoken strategies became second nature to us. 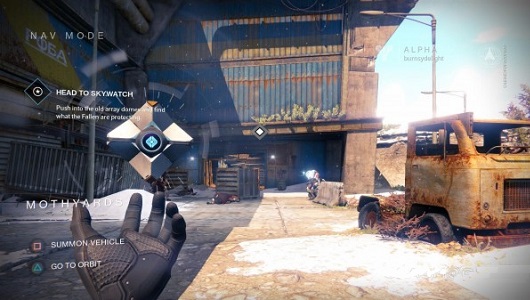 By the end of that particular mission, my mind was already made up. I was already on the PSN store and had the Destiny pre-order in my virtual shopping basket before you could say ‘that wizard came from the moon!’ Unlike the wait for the alpha, the wait for the beta honestly feels like a challenge.

What a difference an alpha can make, indeed.