I’m not a big fan of Mario really. It’s not that I hate the portly plumber, I’m just bored of him. Year in, year out we seem to get another ‘brand new’ adventure starring the Super Mario Bros. in their quest to save Princess Peach. Again. Mario games are the very embodiment of “If it ain’t broke don’t fix it”, which isn’t a bad thing if the games remain at a high quality, and high quality is what Nintendo do best. So when I went to the Nintendo hands-on a few weeks ago I admit I approached Super Mario 3D World with an air of “here we go again”. When I walked away however, I was very pleasantly surprised.

Super Mario 3D World can be enjoyed alone or with up to three friends, and offers four characters to choose from; Mario, Luigi, Toad, and Princess Peach. Although it’s played cooperatively, each player is scored and graded at the end of a level, adding a nice element of competition similar to that of Little Big Planet. The levels are big and wide enough to explore on your own, but as always playing with friends is more fun. Unless they’re crap, then it’s just frustrating.

There were four worlds and one boss battle to play through, each unique and giving an idea of the variety of levels that will be on offer in the finished game. There were pipes to travel through, enemies to jump on, red coins to find, and a lot of fun to be had. 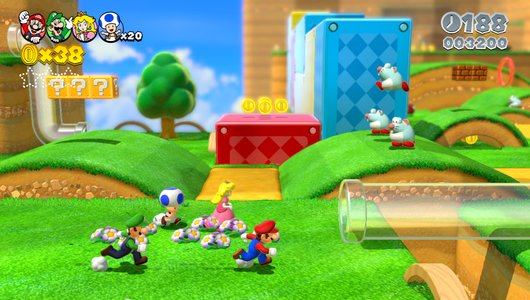 This time the pipes are clear. So that’s different. Right guys?

My favourite level of the demo had me riding on the back of an aquatic dinosaur looking creature as I slid down a watery slope trying to avoid obstacles, collect items, and find secret routes. I played this section with a lovely rep, whose name escapes me, as my co-op partner and working together to control the dinosaur on its journey downward was a hell of a lot of fun. The best way I can describe the control of the watersaur is weight shifting; when the characters are in the middle of its back it’ll stay straight, when we ran to one of its sides it steered in that direction. It took serious communication between the two of us, and the sense of excitement was heightened as we’d perform tight corners and launch over deadly jumps by actually cooperating.

The boss on show was a giant burrowing snake wearing a crown, which I assume makes it royalty of some kind. The royal snake was accompanied by other burrowing snake minions who instead of crowns on their heads had plates on their faces and emerged from the ground at varying heights. My partner and I had to use the plates as platforms until we had climbed high enough to jump onto boss snakes head. This method was rinsed and repeated until head snake was finished with, in the usual Mario fashion. Although it sounds very Mario-by-numbers, it was in fact very hectic and a lot of fun, especially with another player. Screaming instructions just isn’t as much fun when you’re on your own. 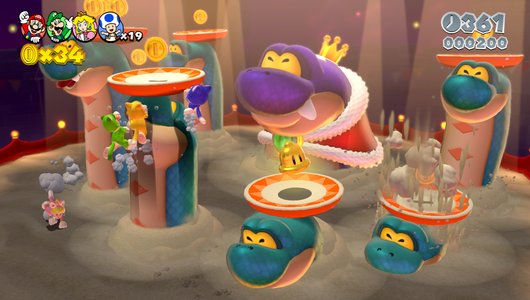 Silly snakes! Plates are not hates!

The gimmick this time round is of course the Cat Mario suit, as seen in the Nintendo Direct E3 video. By collecting bells that are hidden in blocks, Mario can now don a cat costume and cause havoc as only felines can. It’s a nice addition to the franchise, and with the popularity of cats at an all time high it’s the perfect time to stick Mario & Co in cat onsies and send them out to play. The new abilities given to the plump plumber and his motley crew are quite cool; characters can now scale walls to reach hidden areas and secret items, as well as slash enemies with their claws to devastating effect. These abilities also added an extra element of strategy in the aforementioned boss battle, as the cat suit allowed Mario to climb up the front of the minion snakes, avoiding the plate traversal and speeding up the battle, making it feel even more hectic.

The multiplayer works great, and is more reminiscent of Ratchet & Clank: All 4 One than any of the other multiplayer Mario games. The camera angle mimics the almost isometric angle of Super Mario 3D Land on 3DS, and works well to give all players as wide a view of the current area as possible. The multiplayer doesn’t just come down to what’s going on on screen though; whoever is using the Wii U GamePad can use the touch screen to interact with the environment to varying effect; for example, tapping on enemies will stun them for a short while, leaving them open to attack from team mates, and ‘invisible’ blocks can be tapped to gain more coins and other prizes. 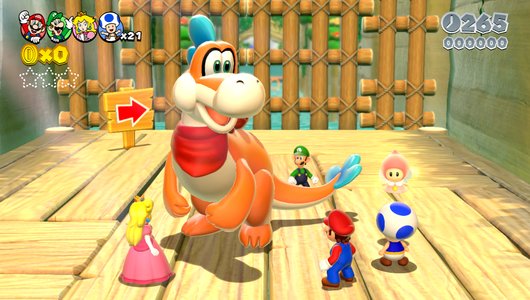 You’re gonna ride the hell out of this guy.

Super Mario 3D World is shaping up to be a real gem. The new perspective and emphasis on cooperative play has breathed new life into a franchise I personally felt was growing stagnant, and I can’t wait to see what else Nintendo do with it. The potential for play focussed on team work is huge, and as Nintendo are the masters of party games I can see many more of these elements being added to the final product. I jut hope they can get the balance right and make the finished game just as enjoyable to play alone as it will be with friends.