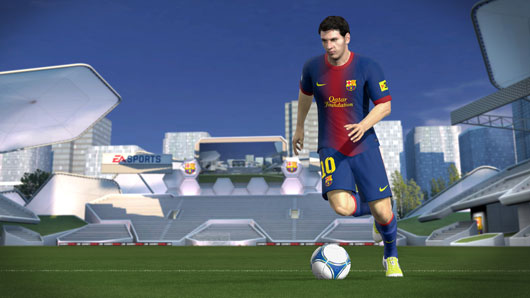 FIFA 13 for Wii U sounds a bit like Frankenstein’s monster when described, but when actually playing it, the finish is more clinical than it sounds.

Let’s set one thing straight – this is not FIFA 13. Well, at least not the same game engine that powers FIFA 13 on the 360 and PS3. Much like the recent Vita port, this is a version of FIFA 12 with updated team rosters and a few added Wii U bells and (referee’s) whistles – and was described as “FIFA 12.5” by the demonstrator of the game. This may seem odd, given that half the point of the Wii U seems to be to finally have some platform parity with the 360 and PS3. Showing year-old versions of games is not the best way to go about this, but was probably unavoidable.

Porting a title from one platform to another is not as simple as it may sound – it takes a great deal of time and effort to port a game, especially when developers have to deal with new hardware; system architecture aside, the Wii U has unique features, such as the Gamepad, that require the addition of extra functionality. Dealing with these challenges probably meant that porting across FIFA 13 – or even building a Wii U version from the ground up – was nigh-on impossible for the developers, largely thanks to the short timeframe between receiving dev kits from Nintendo and ensuring their hit their launch target.

Graphically, the Wii U version of FIFA 13 doesn’t look quite as good as the 360 and PS3 versions – but the difference is honestly pretty minimal, as there weren’t too many graphical improvements made in the jump to FIFA 13 from FIFA 12. The main difference I noticed was in the tackling vs dribbling system; the Wii U version of FIFA 13 does not include any of the improvements included in the latest 360 and PS3 versions. Stepping in tackles are now more disruptive, meaning that a well-timed tackle is more likely to be successful, but a badly timed one is more likely to leave you exposed and let your man beat you easily. The fact that the Wii U version of FIFA 13 does not incorporate these balance changes is a shame, as these adjustments seem like a very welcome rebalancing of a system that seems all the better for it. Other new additions such as international management options are also lacking, but there are some key new features have been added especially for the Wii U.

Perhaps one of the most obvious is the “shake to shoot” system. A quick shake of the pad allows you to use the representation of a goal net that pops up on the Gamepad screen, allowing you to pick the spot you want to aim for in the goal. It is worth noting that this then highlights where you aimed and where you player’s shot actually went – as individual player stats still play their part in the accuracy of shots. A similar, but different system is available for free kicks and set pieces with an option to “Lift and Look” – again allowing you to pick your spot, but this time from a first person perspective. This is particularly supposed to make free kicks easier for Wii U players, but not sure how well this will work as, from a first impression, it looked equally complicated to me. 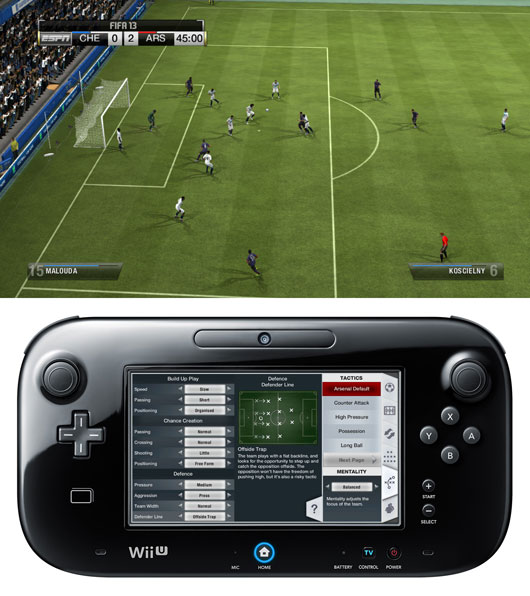 The bottom portion of the shot above shows one of the management screens available. The tabs on the right hand side of the screen give you quick and easy access to the rest of the pages.

There’s also been an extensive number of additions to the management options in the Wii U version of FIFA 13, all of which are available through the Gamepad screen. Team management can be done whilst playing a match, in what is being dubbed as “Full Team Management Control”, or carried out in isolation in the “Manage the Match” mode, which shows up when picking controller options. This allows players to take control of all of the in game tactics and formations options that are normally only available via menus. It also adds the ability to make any of the AI controlled footballers make runs by dragging their icon into position. You can also make subs and try to inspire or motivate your team with half time team talks. These management options can be employed by a single player, essentially making it a football management game with a full 3D match engine. It can also be used in conjunction with up to four players using Pro Controllers.

Four of us got to try this out, and fun was definitely had – but maybe not entirely for the “right” reasons. The asymmetry of Wii U gaming is consistently being presented as a positive unique selling point. In the case of FIFA 13, it sees one player taking charge of tactics whilst the others attempt to play – I say ‘attempt’ to play as this seems accurate. It is entirely possible that this system could be used effectively when players are working well together, but in practice, at least with the group I tried the game with, “Full Team Management Control” just seemed to lead to management griefing – with our manager setting us the “challenge” of having our keeper come all the way into the opponents box for all set pieces… and just a few other occasions he just felt like rearranging the formation for the heck of it. It is more difficult to defend when all your defenders are too busy attacking.

That sounds like a complete negative, but it may not be. I do not know if I have ever laughed my way through a game of football so much since seeing Wayne Rooney’s real life drawn on ‘haircut’. It was enjoyable, but I’m not sure it was for the reasons the developers were hoping for. You will be able to judge if the Wii U version of FIFA scores too many own goals for yourself when the game positions itself on store shelves on November 18th 2012.