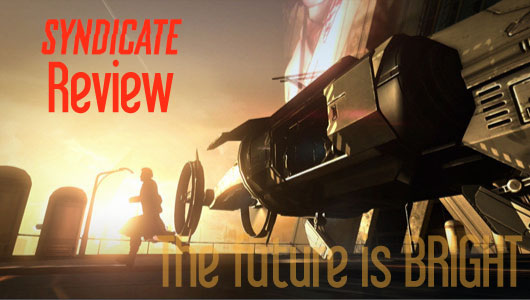 Syndicate may have been an entirely different style of game in the past. Right here, right now though it is a futuristic first person shooter. Fans of the original isometric real-time strategy game may be disappointed that this is not more of a remake than a reimagining in a new and popular genre – but this is what it is. Business is war… and so is the business of making computer games.

If Syndicate has taught me nothing else about the future, it has taught me that business is war and lights will be brighter, but doors will be more difficult to walk through. There is a definite over-reliance on the “God-of-War-door” or Arkham Batman-style grate removals that require all too much bashing of the X-button to pass through. Also, improvements in light bulbs between now and 2069 will make them headache inducing-ly bright, often to the point of annoyance.

Bright lights aside, though, most of the well-polished, detailed environments, from ultra futuristic office style laboratory to a mobile floating utopian island or a gritty back alley warehouse, do a good job of making you feel as though you are taking a (albeit slightly over-linear) journey through a well-fleshed-out futurescape. The juxtaposition of sterile offices and gritty back alleys reinforce the dichotomy of those that exist as part of a Syndicate and those that exist outside of the corporate environment. Easily comparable to a very similarly themed game — last year’s Deus Ex:Human Revolution — the environmental areas of Syndicate seem more disjointed from the cityscape that acts as more of a backdrop than the more free-roaming Deus Ex level design. That is to be expected, though, given that Syndicate is much more of a straight shooting FPS with none of the RPG trappings of Deus Ex. 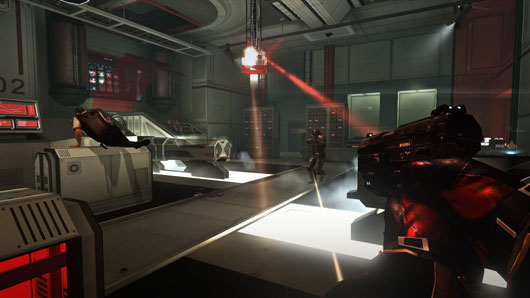 The story of the single-player game, set in 2069, is well-presented. There are some some mildly captivating performances from Brian Cox and Rosairo Dawson — who both provided voice and mo-cap performances for the two of the main roles with Michael Wincott providing the voice of the other. All three fill fairly comfortable roles and don’t help distract from the story being ultimately a tad bland, contrived and not really serving to drive you through the game. The plot twist isn’t very twisty and is fairly easy to see coming. Most of the story is presented in the game engine, in a similar manner to Half-Life, but it isn’t as well-directed as its source’s cut scenes. All too often I felt restricted to the exposition of story happening in front of me, with some scenes quite literally being pedestrian. There are a fair number of collectable items and other elements to find in the environments that do a good job of reinforcing the themes and adding depth to the universe that the story is creating.

What Syndicate really does get right is the basic mechanics of the shooting engine and gameplay. The weapons of the game are largely your slightly run-of-the-mill military warfare game setup, but most have alternate fire options and there is a little bit more of the feel of the future when weapons start locking on targets and firing round corners or stunning victims in place — both fun when you are using them, not so when they are being used on you! There are three basic powers to “Breach” the tide of combat in your favour: Backfire, Suicide and Persuade. Backfire makes you enemies weapons misfire, knocking them backwards while stunning them. Suicide, for some reason, makes people eat grenades — handily killing anyone in their blast radius. Persuade convinces people to fight temporarily on your side and then take their own life should there be no one left to fight with. You can also engage a DART Overlay mode that slows time and highlights enemies. This would be a little handier in combat if it didn’t make it so difficult to tell if enemies were safely in cover or not. After a little bit of practice, I found that these powers, when used correctly with the guns found throughout the game, did lead to some some fairly consistent enjoyable moments in the single-player and co-op modes of the game.

The single player boss fights are a real mixed bag of the good and the bad. With some being fairly enjoyable use of the basic game mechanics and other being well, more of a Benny-Hill-boss-fight. Queue the music and run round in circles shooting each other until someone falls over. Some also become as much (or more) about controlling the environment than battling the enemy. It can add a nice level of depth but can also be frustrating on first encounters or until the objective becomes obvious.

The four-player co-op portion of the game turned out to be more fun than I expected. The lack of a competitive multiplayer may disappoint some, but I prefer co-op gameplay anyway and am quite pleased to see a game that concentrates on the single-player and co-op experiences. With four people effectively working together, Syndicate‘s nine specially designed co-op levels can be a lot of fun. Objectives vary depending on the location, and although a bit rough in some areas, the level design on the whole leads to some good choke-points, requiring you to battle to move the frontline forward and often best approached by using combined powers or attacking from multiple angles. There is no re-spawning. Downed teammates can be re-booted if within close proximity, but, by straying too far ahead of your team or getting downed to close to a powerful enemy, you can be out of action for a while. I found this to be a reasonable mechanic, as it helps encourage you to stick with your team and punishes you for not doing so. Conversely, though it does force you down the path of only really wanting to play with people who you know and can talk to – although the characters do a good job of voicing your present situation to your teammates. Some levels can be completed with less than four of you, but some briefings advise you have four people in your party for a very good reason.

There are multiple options for your chip and weapon upgrades. These are similar but different to the options available in the singleplayer upgrade options, and you can additionally invest tokens and points — earned for successfully completing levels and challenges — into weapon and application research. It is a fairly deep system and allows you a fair degree of control over the type of player you want to be. I am skewing towards the healer option, with an increased “Breaching” time, a squad heal application and a shield that protects the entire team. 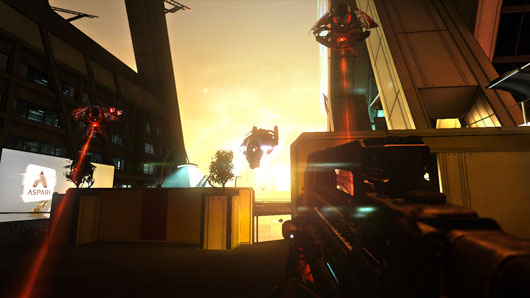 Overall the modern day Syndicate is a pretty enjoyable package with some flaws that do not seriously detract from the core. I am not certain how much staying power the co-op multiplayer will have, but if it continues to be fun, and if I find a team I enjoy playing with, I could easily see this review score rising by a Barrel. Some people may let the past history of the name of this game persuade them not to pull the trigger and buy the game. Just make sure whatever you decision you make in the future is a choice of your own free will and isn’t guided by some mystery man you have never met from the datanet.