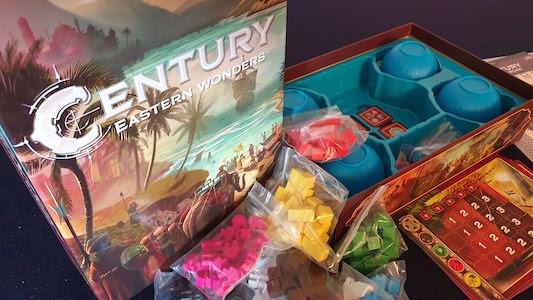 In the beginning there was Spice.
And Roads…

Once upon a time, a long time ago (ie. 2017), a game of cunning, caravans, cubes and deck-building emerged from the dusty undiscovered lands.

This original Century: (called ‘Spice Road’), provided an enjoyable Card based engine building game for up to five – which it still does to this day. Very accessible, with easy to understand rules (one page only!), play can begin with little fuss in the blink of a camel’s eye.

And yet the resulting gameplay is similarly fast paced and rewarding, players managing a deck of trading cards that convert spices (coloured cubes) into ever more valuable combinations and so out-merchant their competitors for the win. Perfect for a twenty to thirty minute diversion.

But Century surveyed his lot and was not content.

And lo! Century: Eastern Wonders then did come out from the waters and brought with it such novelty, that the people did ooh and ahh. So similar, yet so fiendishly clever.

Here players take to the high seas, as a merchant on a “once in a lifetime adventure for glory and profit in the exotic Spice Islands”. (Albeit now only for up to 4 players – the merchant business is a cut-throat one, after all.)

Building on all that is familiar with the original (including the one page rules and easy access), the gameplay in Eastern Wonders leaves Spice Road in it’s wake, by bringing elements of area control and increased player interaction into the mix.

It does this by replacing the trading cards with set of modular map tiles that can be placed in various, unlimited arrangements (bringing much-needed variation and replayability) to create the strategic backdrop for the game.

Each sea tile contains a spice island that generates or converts one or more of the 4 spices in the game into different combinations (just as in Spice Road) – although to trade a Player must first have a trade post on the island.

Players move their boats around the map, establishing posts (at an increasing cost, and corresponding modest victory point reward) that enable them to generate and convert spice.

Clearing a set of trade posts (column) from your player board brings upgrades that make quite a difference to your turn and feel substantially rewarding.

With the right mix of spice on board, Players deliver them to claim larger bounties (of victory points) at one of four ports, which then renew until a player claims their fourth (at which point the game ends and final scoring occurs).

It’s not all plain sailing, though. Gameplay-wise, there’s a spice cube cost for many of your actions:

This area control element to the map, where you clash with your friends and race to establish your influence, brings a layer and level of interactivity to gameplay that was all too absent in Spice Road (where players all too easily could become focused more solely on their own cards and engine building).

The board becomes the (much more visual and engaging) puzzle – with competition apparent from the off and that only increases in pace as the game continues: where you go, what you claim and second guessing you friends creates a much more rewarding strategic conundrum.

It’s this that makes this such an enjoyable game – especially at it’s price point – which given it is the same price as the original Spice Road feels like there’s a lot more going on for you cash here. OK it’s slightly less easy or as quick as the original but is a lot, lot deeper.

And Century surveyed his lot, and was not yet satisfied…

However one of the selling points of the Century series, is that the games can be combined, creating something new again. Can we say Exponential?

Here some of the engine building cards of Spice Road are mixed with some of the area control map and elements of Eastern Wonders. This really does create a third, and differing, experience. However, in reality the two mechanisms do not easily sit comfortably together when play commences.

Often this means your focus narrows to one OR the other element, usually at a disadvantage to the other. It’s certainly a different kind of (absorbing) challenge, but can quickly become frustrating and skyrocket the analysis paralysis.

Whilst appreciating the design chops that combines the two games in this way, it can often feel a bit clunkily cobbled together, diluting the purity and attractiveness of the original titles’ gameplay.

Bizarrely that’s what make this review tricky. On its own, Eastern Wonders is a great game at a great price. I’d recommend this over Spice road without hesitation. I’d recommend it full stop. And in the end, that’s what I’ve based my rating on.

But buying both? – whether standalone or integrated, there’s potential issues with value there. Bear with me now!

You see, to work together there has to be a commonality to their mechanics. So if Sand to Sea is not your thing, and you have a clear favourite out of Road and Wonders, then why/when would you ever play the other? They’re just too similar.

Likewise, if Sand to Sea is your favourite, then would you play either game’s solo variant again?

And paradoxically, if you would play both because you also enjoy one of Spice Road or Eastern Wonders on it’s own merit – then the second of those purchases then becomes a rather expensive expansion and poorer value for money. Phew!

And Century surveyed his lot, and was STILL not satisfied.

Yes, that’s right. It gets more complicated. There’s a third helping on the way with Century: A New World (currently on pre-order).

As yet unseen, this edition will also be able to be combined with either or both of the other Century titles – for a grand total of up to four different variants. Did you just see those reservations about value multiply? Did you?…

And come to think of it, when the dust has settled at some point in the future, what if we then saw a discounted mega box containing all three titles? I wouldn’t take any bets against it, would you?

In the meantime, the decision is simpler.

Whether you like the idea of Sand and Sea or not, are a must-have-em-all expansion collector type, or are just looking for a good value four player area control game; with bags of cubes, competition and challenge, you certainly could do a lot worse than pick up Century: Eastern Wonders.

It’s certainly staying on my shelf.

Tags: Century, Eastern Wonders, Modular board, Pick up and deliver, Plan B Games