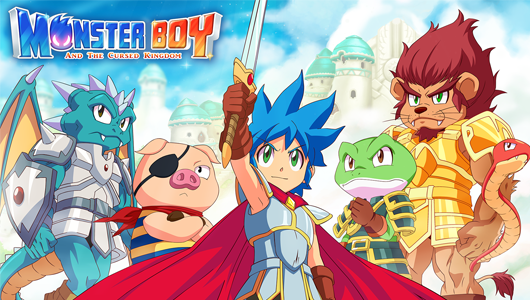 Monster Boy and the Cursed Kingdom feels like it came out of nowhere. When it arrived in my inbox, I thought to myself “Cool, the Wonder Boy III remake has a sequel”, and decided to research this latest instalment before playing it and apparently I’ve been living under a rock for the last few years.

First of all, Monster Boy isn’t a sequel to the Wonder Boy III remake as I first thought it was, but is, in fact, a successor to the Wonder Boy series as a whole. SEGA owns the name Wonder Boy, hence the change, but as the official website so proudly displays Monster Boy was “Created in cooperation with series creator Ryuichi Nishizawa (former Westone Bit Entertainment)”, the spirit is well and truly intact.

Secondly, Monster Boy did not, in fact, appear from nowhere. It has, in some capacity, been in development since 2014 when it was originally called Flying Hamster II: Knight of the Golden Seed before being picked up by FDG Entertainment and changed to Monster Boy when Nishizawa became involved.

To be blunt, when I read into the history of Monster Boy, I was expecting it to be a bit of a mess. It looked great, sure, but style over substance is all too common with games, and just because something looks great doesn’t mean it will play great. Imagine my surprise then when just a few hours in, Monster Boy had found its way onto my Best Games of 2018 list, and only climbed higher the more I played.

The story of Monster Boy is as simple as they come; you play as Jin, a young blue-haired youth who goes on a quest all over Monster World in search of 5 magic orbs that will restore the kingdom’s inhabitants to their human form after they were all turned into animals by his drunk jester uncle, Nabu, with a magic staff. 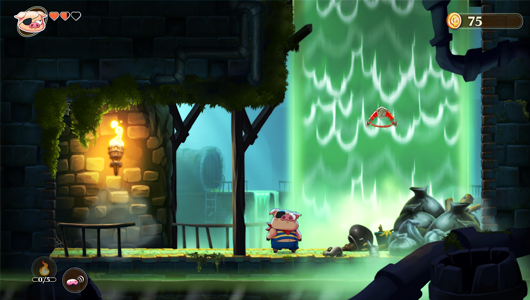 Jin is turned from a human to a pirate pig and is sent on his quest by the royal magician Mysticat to retrieve the first orb which will grant him the power to transform into another creature and bring him one step closer toward his goal.

The story moves along at a nice pace and is filled to the brim with some genuinely funny writing and charming characters, each coming to terms with being turned into a different animal. There are a few diversions from the main story that I was worried would slow the pace down but that wasn’t the case at all.

Game-play falls into the ‘Metroid-vania’ genre and is one of the better ones I’ve played this year. In fact, it was nice to play a game in this style that doesn’t rely on randomly generated levels to keep things interesting. It feels like a throwback to the 16-bit era in the best possible way.

Exploration was great for the most part with a multitude of secrets to find, and areas and enemies each having their own distinct look and personality. However, there were several jumps that relied on pixel-perfect precision, which doesn’t really work too well with hand-drawn visuals. I also found a couple of the puzzles and levels to be slightly obtuse, dragging a level on for much longer than it should have been. 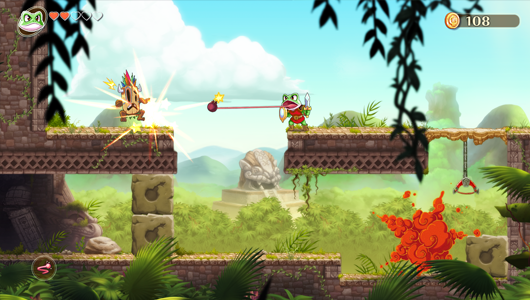 There were also times where I needed to use a specific piece of equipment with a specific upgrade to solve a puzzle or scenario which made me feel locked into upgrading things in a certain order or else be punished. I almost gave up several times, convinced I’d backed myself into a corner, but something kept me coming back, and I have to say that the sense of accomplishment I felt when I finally solved these puzzles or made these insanely specific jumps was completely worth it.

Combat controls are standard with a square to attack with Jin’s equipped weapon, whether that be a sword, javelin, or magic staff. X is the jump. Triangle and circle activate his transformations abilities, and for the pig and human forms, the equipped magic spell can be selected with L1 and R1. R2 brings up the transformation radial, allowing you to pick your current form. If it ain’t broke don’t fix it, right?

Combat feels nice, and the sword has some nice crunch behind it, and magic attacks can be absolutely devastating. I did find constantly bringing up the radial menus to swap magic or animal form annoying at some points as a lot of the puzzles and terrain traversal, specifically in the second half of the game, require several transformations so these sections became very stop/start.

There are 6 transformations in total, each becoming available once the relevant orb has been retrieved, and each form comes with its own set of power to help Jin in his quest. Pig can butt stomp and smell things invisible to the naked eye, and Snake can fit into tight spaces and climb up moss-covered walls. However, their combat range is limited and they can’t wear armour or use weapons. 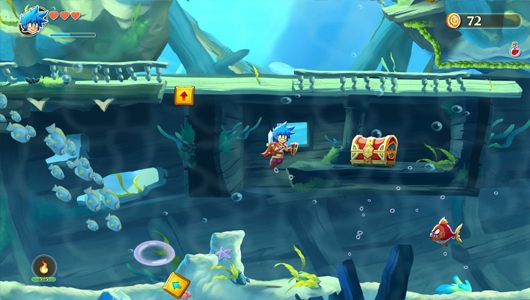 The frog form can use his tongue to grip special catapults, throwing himself into tough to reach places. Lion has a devastating charge that can break rocks, dragon can fly and breathe fire, and Human can dash and use magic. All of these forms can wear armour and use weapons and will be used for the majority of the game once unlocked.

Transformations work in the same way a suit upgrades in the Metroid series, with each new form granting you access to areas that were restricted before, and I highly recommend you take full advantage of these new powers and explore thoroughly as there is an absolute tonne of loot to find, and most of it is genuinely useful.

There are 21 of these littered all throughout Monster World, and when he brings him back three of a kind he’ll give you a small prize. These aren’t essential collectables, but fun to find nonetheless, and handing them back to their owner unlocks a piece of music to listen to.

More important collectables include heart containers that will increase Jin’s total health, magic truffles that will increase how many spells he can cast, and broken pieces of gold armour that must be collected and taken to a special blacksmith for reassembly. Each piece of gold armour requires 5 pieces to be found, for a total of 25 pieces in total. Each finished piece will set you back 1000 gold each too, the blacksmith doesn’t work for free. 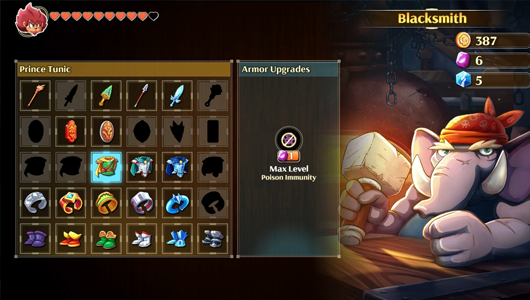 Regular weapons and armour can be found while exploring, or bought from the various shops scattered throughout the kingdom, and each piece of equipment can be upgraded at the regular blacksmith for free – you just need you use one of your very rare gems that can be found randomly in treasure chests.

Monster Boy is a deceptively large and, at times, difficult game. I went in expecting a nice 10-hour romp through Monster World without breaking a sweat, but by the time I’d finished the game I’d spent almost double that time and still had a load of collectables to find. The difficulty level jumps through the roof around the halfway point and things go from easy to Castlevania levels of challenging in the blink of an eye.

Simply put Monster Boy and the Cursed Kingdom is a fantastic game. It’s beautifully hand-drawn, anime-inspired visuals will grab you as soon as it boots up, and it’s perfectly charming music will stick with you throughout your playthrough and beyond. The difficulty spike and obtuse puzzles can be frustrating at times, but pushing through and learning the game’s nuances is so, so worth it.

Monster Boy and the Cursed Kingdom has gone from not even being on my radar to one my favourite games of 2018 and I highly recommend you pick it up and enjoy the adventure for yourselves.