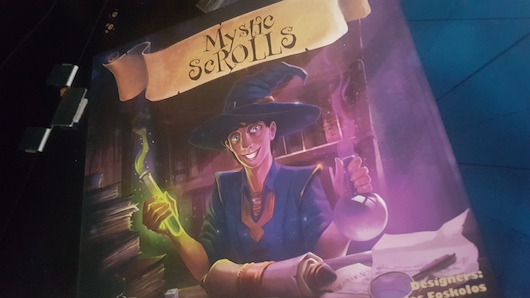 Mystic Scrolls is a real-time, frantic dice-rolling-and-matching game for 1-4 players that is simple to understand, play — and provides a small-yet-well-formed bite of gaming distraction. At least for a little while…

Imagine the scene: intent on claiming the top spot in Wizard Magazine’s hot 100, you’ve spent years tracking down the hidden ancient temple in the enchanted wood — and it’s lost library of high magic that’s filled to the brim with arcane knowledge. And now it is within easy reach.

I will be the best, I will make it to number one! Ah yiss…

And yet, just like buses, as you break through to get your grubby hands on all those spells, between one and three other wizards all show up at exactly the same time. I mean, what are the chances? Just how hidden is this temple?

Well game on, losers! There can be only one! Those scrolls of knowledge are all mine!

A selfish, vain, homicidal wizard intent on keeping the wisdom of the mystic scrolls all to yourself.
Just like all the others…

Players take the role of one of four culturally diverse wizards with slightly different specialisations (offensive, defensive, random, generalist) and three starting spells of various types. Each spell has a casting ‘recipe’ that requires a mix of one of six elements to activate. 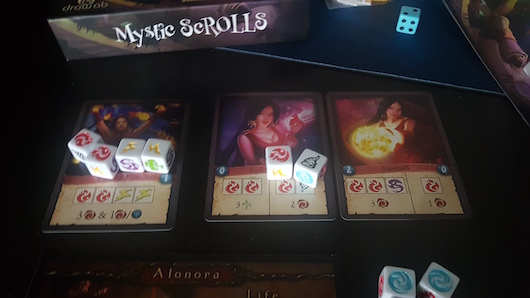 Luckily, wizards start with five six-sided dice (one element per side, see…) with which to conjure up the elements needed for their spells. Each round the action starts with all players simultaneously rolling any number or combination of their dice, continually, until matching a spell they wish to cast in it’s entirety, then placing those elements (dice) on the spell card.

Players then take an equal number of dice from a central, limited (depending on number of players) dice pool and continue rolling and casting. In addition, there is one special random spell scroll of various effect each round, that can be claimed/cast in the same way and added to a wizards grimoire for that and future rounds.

If a player cannot draw any more from the pool they MAY shout “stop” — or MUST if the scroll card is taken. The rounds then ends immediately, and a casting phase follows in which all successful spells having their effects applied simultaneously. This is in the main either dealing damage points to another wizard’s stamina — or occasionally healing themselves. 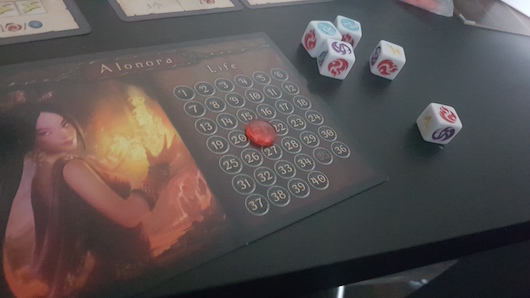 Once a wizard’s stamina score reaches zero they are out of any future rounds, play progressing until only one wizard remains. But as all effects are applied simultaneously each round, it is possible for no-one to be the final victor.

A simple, bite-sized chunk of gaming distraction
Little interaction and next to no strategy
Limited long-term variance

Mystic Scrolls is a game based around a simple roll and match mechanic given a contemporary (magical) makeover and real-time rolling element — but with little else in the way of frills. This is entirely in keeping with it’s positioning as a simple, family game offering that plays in around 15minutes: regardless it is well-delivered with an engaging (if clunky) theme and bold artwork with big cards, all of which help it sit nicely with younger players.

However the tension is the game comes solely from the real time dice rolling element, which does deliver a sense of urgency and excitement in the first few plays. As a consequence though, players tend to be completely focused on own dice and spell cards and there is little player interaction other than the damage dealing part of the round. Even this is constrained, with wizards only ever damaging the player to their right. Yup, no tactical spell casting here.

In a similar way, it is light on any kind of ‘strategy’. Yes each of the four wizards favour a particular flavour of magic, and the elements they are looking for on their rolls, but there is no real synergy of cards or elements – no feeling of specialisation.

The one special scroll does not do enough to prevent each round (and ultimately each game) quickly feeling like a repeat of the one prior. And the heal mechanic simply seems to prolong the inevitable. The random scroll is just that — completely random which may or may not compliment your current spell card requirements.

All this leaves (perhaps older?) players with a feeling that momentum or direction cannot be built and ultimately it is just a case of ‘fastest fingers first’ in rolling your elements as quickly as you can until the last wizard is left standing. 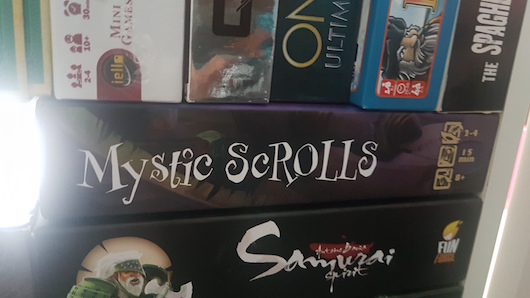 But then, sometime’s that’s all a game needs to be for 15 minutes or so. And maybe sometimes, that’s all that some players want from a game. And whilst I don’t think there’s enough in it to sustain lengthy play, Mystic Scrolls can certainly be engaging enough for the short time it is played, especially with younger audiences.

It may just fill the gap you need it to… I’m just not sure how often I’ll be reaching for it from my shelf (even if it we have moved on a long way since Yahtzee).