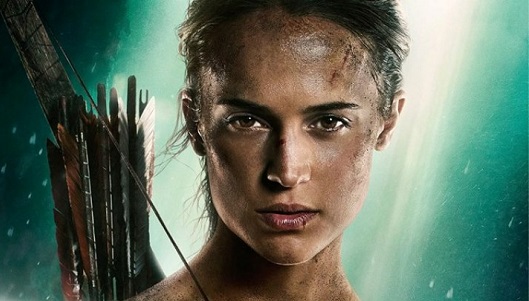 On the back of the Square Enix revamped and re-imagined Tomb Raider games in 2013 and 2015, director Roar Uthaug reintroduces Lara Croft to a new generation taking the Tomb Raider franchise kicking and screaming in a much leaner and meaner direction. Taking a number of beats from Tomb Raider in 2013, Roar’s Tomb Raider is a showcase for emerging actress, Alicia Vikander. The question remains, can Lara rise above the long shadow cast by her former selves?

Growing up playing the Tomb Raider games, you could arguably say that Lara Croft popped my video gaming cherry in so far as 3rd person action adventure games go and eschewed popular opinion by casting a female heroine as the player character. As the series went on, her story was fleshed out and at some point, Lara was even “killed off” canonically, only to be brought back and re-modelled a number of times through the different generations of consoles. Such is the pedigree of the Tomb Raider games that a 20th anniversary edition was also commissioned, completely rebuilding and remaking the very first title from the ground up.

Tomb Raider in 2013 then did a number of things differently. The story of Lady Lara Croft will always be about her dead parents (who died in a plane crash in the Himalayas), the Croft Manor and exploring the mysteries of the world and the ‘tombs’ there in. In 2013, Lara was reinterpreted as young, unskilled and untested, with a much narrower focus of exploring one singular Japanese island called Yamatai, supported by a number of other characters as she fought for her life and the chance to escape the island without really knowing the full extent of the horrors that lay within.

Lara was vulnerable and there was backlash in the media in regards to her treatment at the hands of her enemies, including the allusion that they tortured, assaulted and abused her. 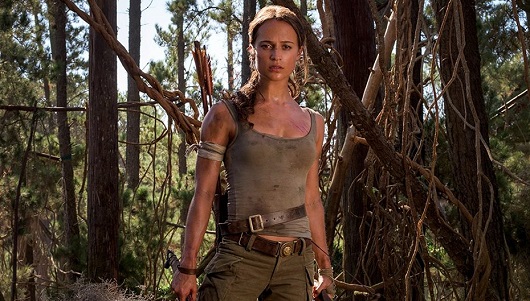 In bringing this story to the big screen, Roar Uthaug doesn’t miss any punches. From the first shot, Lara is introduced as a brawling, athletic, smaller version of the hero that is competent in both hand-to-hand combat and martial arts. This becomes wholly important later in the film but also sets the tone for what becomes a surprisingly blunt and violent film at times and pushes Alicia Vikander to the limit.

Once the film gets past the awkward introduction, a made-up backstory of a struggling, down-on-her-luck Lara, she suddenly makes it to Hong Kong and out to the island of Yamatai. It is from here that the movie really sinks its teeth in. This is one of a few niggling issues with both the pacing of the film and writing. Most of the exposition, about a Japanese queen, the mysterious island of Yamatai and, yes, Lara’s father, is told through overlaid wipes and voice-over, which comes off as both cheap and visually uninteresting. Rather than show the audience, the movie simple tells us – and not in the good Indiana Jones way.

Despite the 2 hour running time, the movie also feels rushed, plot points and ideas are not fully fleshed out or given time to breathe and the time between Lara living on her own, to suddenly fighting on an island is reduced. The eventual conclusion and exploration of a tomb is minimal and Uthaug pushes through to a contrived ending that is neither a big revelation or very exciting.

Because of how the 2013 game was made, the writers of Tomb Raider have had to fill in the gaps but also do more to humanise some of the supporting cast, including Lord Richard Croft (Dominic West) and the main antagonist (Walton Goggins). Goggins does a decent job of filling the role of an over worked, underappreciated and slightly creepy leader of a band of militia seemingly stuck and forced to work on Yamatai to uncover its secrets. Having been stuck there with Richard Croft for seven years, he then directs all that frustration at one person – Lara.

Similarly, Dominic West is seen largely in flashbacks with younger versions of Lara, which is a nice touch in reference to younger versions of her seen in the games, although the actresses in said scenes bears little to no resemblance to the toned, bronze athlete that is now Lara Croft. 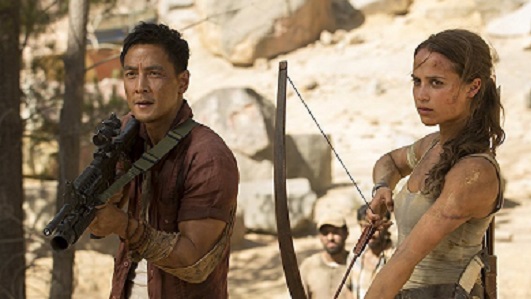 The difference in the first half of the film and the second is noticeable, as the Lara Croft from the video games starts to emerge.  Similar to the games, when push comes to shove, Alicia Vikander shoves back and hard: I don’t think there has been a woman on-screen punching a man square in the balls quite so spectacularly since the first Mortal Kombat movie.

Roar Uthaug has worked on a number of other films, such as The Wave and Flukt but by far, Tomb Raider is the most prominent for the Norwegian director. Relying on mostly close to medium framed shots it keeps the action tight and focused hammering home the action. It is also refreshing to watch a movie that isn’t afraid to show the blood, sweat and tears that comes with running through a jungle and seemingly scaling cliffs barehanded. The grit and dirt and mud is kept in unlike the airbrushed techni-coloured Marvel Heroes so many have become accustomed to.

That said, there is no escaping that the producers can’t help showing that even after rolling around in mud, Vikander will stand up, face perfectly bronzed and wiped clean, lipstick and makeup all in place. Alicia Vikander really goes all in with the stunts and it’s a credit to the film and to her tenacity that she can literally pull off some Tom Cruise level stunts of grabbing, jumping and swinging for dear life. This is married with the fact that Roar doesn’t shy away from any of the action as Lara feels every single punch, hit and fall on her way down. 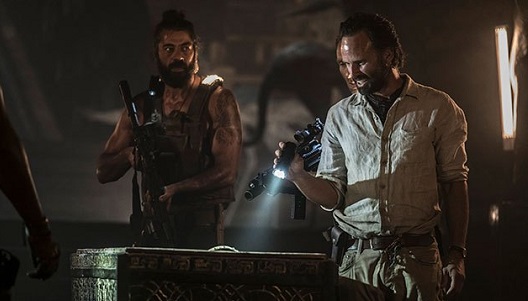 As far as her character arc is concerned, there is a turning point for Lara Croft in the film where in the middle of the night she literally chokes a man out, again rolling around in the mud and in that, has made her first real kill. This is important largely because this is simply not how Lara is in the game. Empowered sure, but for whatever reasons the writers are doubling down on Vikander’s ability to go hand to hand, with some barely explained points on her ability to fire arrows and the titular climbing pick axe making a neat cameo toward the end.

It’s visually arresting and also a little odd, to see this otherwise beautified model strong arm a goon in such brutal fashion and is at odds to the expected lightheartedness and sense of discovery that should offset it. Similarly to the pacing of the film, the moments of levity are glossed over, Lara barely registers any of the come ons and is so petite and almost shy in her role that there is a lack of confidence and authority that comes with inheriting the title of Croft.

This is not nearly so important in a video game but within the movie it sometimes feels forced, that despite her ability to pull off the action Alicia Vikander is simply going through the motions, of pretending to be Lara Croft, dressed as Lara Croft rather than owning the character as her own. Arguably this was set up by the fun and hammy Tomb Raider movies of Angelina Jolie fame, who was not afraid to change up the appearance of the character but also keep her fresh but still sexy. Those particular movies as well highlighted the whimsical, fun and cartoon-ish nature of the games as well as providing a strong supporting cast of character to riff off. Vikanda might be less Jolie and closer to someone like Milla Jovovich in her execution. 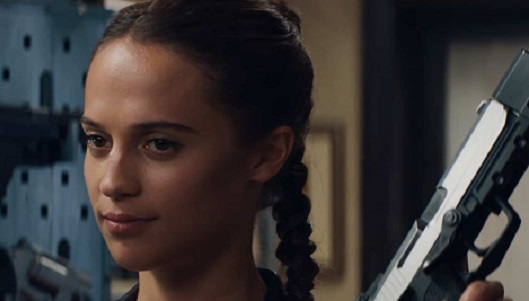 Tomb Raider works best, if no thought is applied, and expectations are not set. It does a highly competent job of recreating some of the shots straight out of the video game and embodies the rawness and action of the newest games.

Roar Uthaug hits the big leagues with Tomb Raider
A number of the shots are straight out the 2013 title
Brutally shot action, does not shy away from the reality of the violence
Alicia Vikanders baby face doesn’t quite sell the character of Lara Croft
Pacing of the film is rushed, cuts through exposition
Resolution of Yamatai is underwhelming and not exciting

Alicia Vikander tries her hardest to fill the shoes of Lara Croft embracing her fierceness but lacks charisma and the ability to be taken serious. Roar Uthang should be proud of the film produced, but hopefully the next one shows a wider view of the world, with a bit more adventure and a more believable plot. Tomb Raider is not what was expected and is let down by a pacing, plot holes and writing.