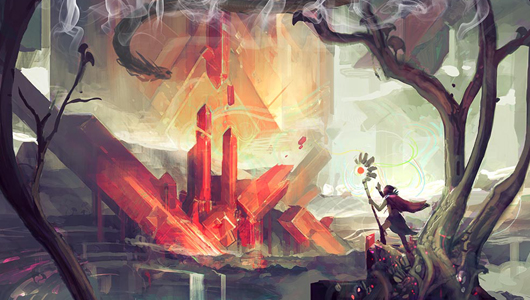 Based in the mysterious Icaion, an ancient planet that developed anomalies that question the logic of physics and life, is a gorgeous looking board game Mysthea, currently on Kickstarter. It is a hand-management and area control game with miniatures, where players take on a role of a Champion of Ilvash to explore uncharted and constantly moving, floating islands. Along the path players will be fighting magical monsters, other players, or maybe joining with them to defeat a particularly perilous foe, upgrading their decks with more powerful cards and discovering the other mysteries of Icaion.

I had a chat with the team that designed Mysthea, Tabula Games, to get a better insight into the game and how it was developed. 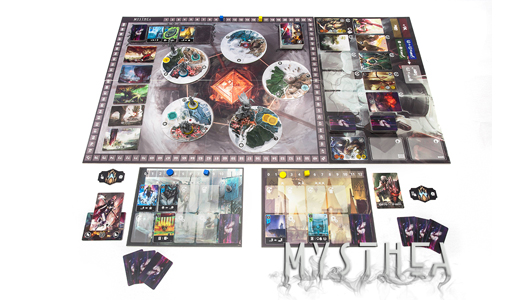 An entire world has been carefully crafted specifically for the game. According to the lore, millennia ago, a crystal meteor collided with the planet of Icaion, forever changing it. The flying islands were created as a result of the collision but the gravitational forces of the cosmic crystal, now present on the planet, hold them floating above the land. Harnessing a power of the crystal a new civilisation has developed. The guilds of Icaion hire champions – players –  to explore uncharted lands as pioneers, with each guild having a separate objective for the expedition.

‘We started the world-building after the game was complete.’ The team tells me. ‘We wanted the game designers to be completely free of constraints while creating their game. Then, we started to brainstorm all kinds of ideas to create an interesting world where all the stuff they put in the game could happen within a convincing narrative. Since we were trying to avoid common tropes, we ended up with the world of Icaion!’ 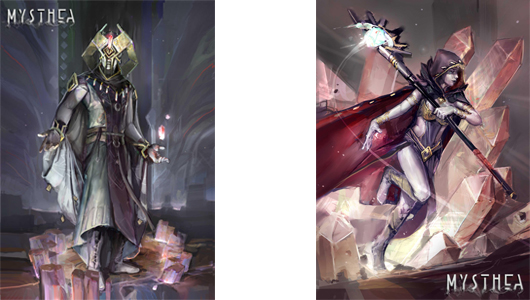 While there is no text within the game (except for the rulebook), those who want to learn more about the world of Icaion, could get an Art Book (which is included in Collector’s Edition on Kickstarter) or look out for a lore ebook, which will be released for free.

The concept of Icaion began with an ambition to create a special gameplay element. Something that would be unique to Mysthea and fit within its world but at the same time would present an interesting gameplay challenge.

‘We wanted the game to be fun and enjoyable for gamers and we wanted to find a way to put something unique in the mix.’ The team explains. ‘In Barbarians: The Invasion (Tabula Games’ previous board game) we did this with the Volcano (3D Volcano, on which players could perform actions, depending on the position of their workers) and in Mysthea we created the dynamic map with moving floating islands.’ 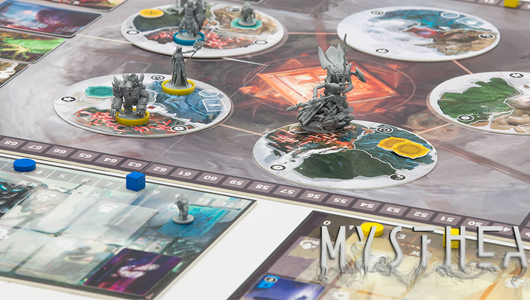 From this main feature, the rest of the Mysthea started to take shape, including the overall look and the atmosphere of the game. In fact, a lot of lore developed as the result of trying to understand how the floating islands could work within the world.

‘When we started to think about ideas that could fit well with the mechanics of the game we realized that the concept of floating islands was always recurring.’  The team explains. ‘Since we were trying to avoid the most common tropes, we decided to avoid the common imagery of a floating island as a sunny, green, blooming piece of earth. First thing, we removed the light and put an eternal blanket of fog covering the whole place. Then, we wanted to find a reason and an explanation for why these islands could float. After a long brainstorming we settled on this strange alien crystal able to levitate, resonating at the right frequencies. From there we started to imagine civilizations with an underlying medieval level of technology, but able to manipulate that peculiar mineral to the point that the whole society was shaped around this power.’ 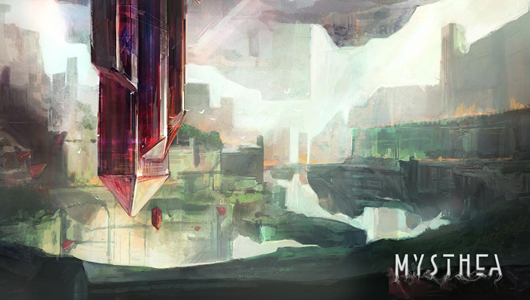 Another advantage to creating a completely new and expansive world is that it is ripe for future expansions and more games in the same universe. Tabula Games team hold their future plans for Mysthea close to their chests but give us a little hint for where they might go next:

‘We have a lot of ideas and if the Kickstarter campaign goes well, there will be a lot of work to do. For now let’s just say that the game is set on the floating islands above the clouds, what lies under them is still a big mystery!’ 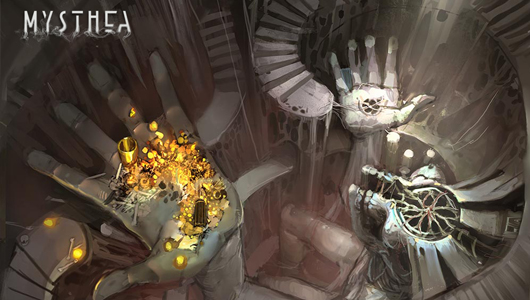 The most striking part about Mysthea is, without any doubt, the art done by Travis Anderson. Every card or image in the game is a painting, intricately detailed and imagined to fit in that world.

‘We gave Travis this pitch of the game lore and some inspirational artwork to explain our ideas.’ The team describes their collaboration with the artist. ‘Travis was caught by this world and he started to draw his amazing works giving the first strong visual direction to the whole project. Only after that, did we give him the expanded lore from which he drew further inspiration and all the pieces came together. Some creations, like the iconic Onygauros, are his inventions that we inserted into the game lore, while other things, like some Champions, are a product of his vision based on our concept art.’

Just like the lore of Icaion has developed and enriched the gameplay, Travis’ art made it even more immersive and believable, even though it has fantastical landscapes and beasts. 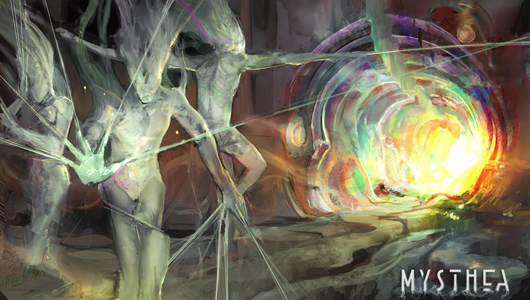 Another element of the game that might pique the interest of players are the miniatures. They look equally as beautiful and detailed as the art, however, the game can be played without them, although Tabula Games team believe that it would not be the same experience:

‘We love minis and we know that our backers love them too. With our previous game, we offered an edition without miniatures, but more than 95% of our backers opted for the miniature version making it clear to us that this is a really loved and appreciated component.’

Tabula Games do have a point there. Most of the more successful games on Kickstarter, like Rising Sun, Kingdom Death: Monster 1.5, Conan and others have miniatures as part of their offering. 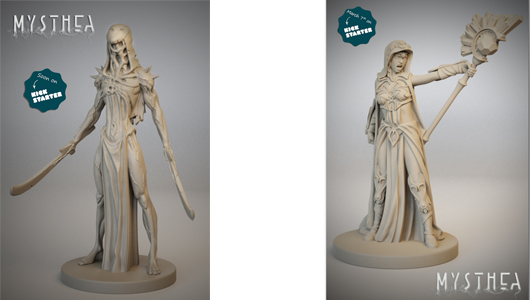 If you are intrigued by Mysthea, then I would also suggest you do not wait much longer to back it because it is a Kickstarter exclusive, meaning that after its initial run and possible late backer pledges (that will be more expensive than the initial campaign), the game will be hard to find. The team are not planning a further retail release and here is why:

‘The main reason [for being a Kickstarter exclusive game] is to give more to our backers at the lowest price possible. Making a Kickstarter exclusive game means that we can skip some links of the supply chains and all the costs that come with it, from operational costs to warehousing and logistics. This allows us to offer more components and of better quality at the same exact price. This is what allows us to be competitive in a market where established publishers are able to leverage famous I.P.s and higher production runs that are not within our reach.’ 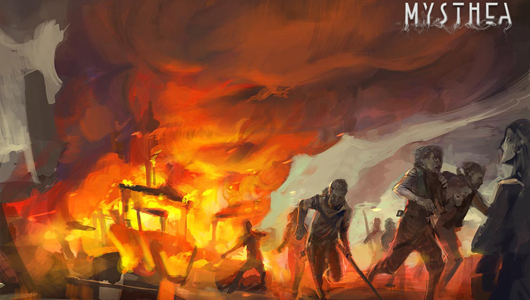 As for future projects by Tabula Games, they have a few games in the pipeline that they are not prepared to talk about just yet. However, these are the kind of games that you can expect from them: