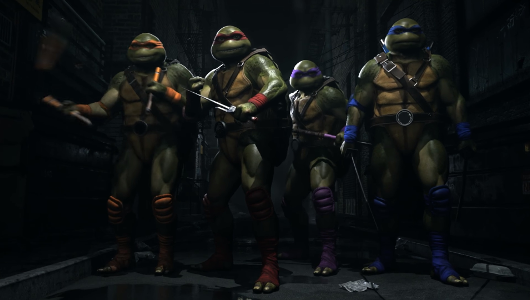 Cowabunga dudes! Those heroes in a half shell Teenage Mutant Ninja Turtles, have been having a massive year and as 2017 closes out it may just be remembered as the year of the turtle. If you’re a fan of nickelodeon’s TMNT cartoon or the current canonical IDW TMNT crop of comics, or even just a fan of fighting games – Teenage Mutant Ninja Turtles have you covered as they celebrate their 2012 series finale, the longest running series of IDW TMNT comics yet or the announcement that they will be playable, as 4–in–1 as part of Injustice 2: Fighter Pack 3 early next year.

“Quite simply, TMNT at its core is a story about a family’s day-to-day struggles,” he says. “Four brothers and their father, working together to find happiness in this crazy and sometimes cruel world.” – Tom Walt, co-writer IDW 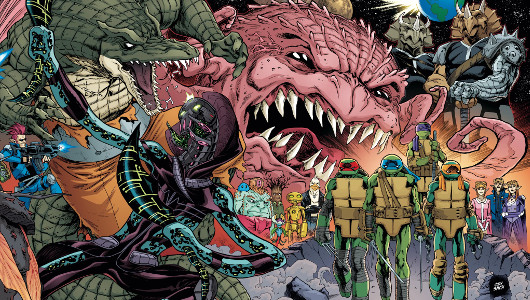 The creator of Teenage Mutant Ninja Turtles Kevin Eastman has gone on record as saying that the current run of IDW comics that started in 2011 is the actual, factual, canonical story of the heroes. This takes nothing away from the animated series, or even the movies but to say that if you want to avoid the slightly more immature offerings created by Nickelodeon, you aren’t missing much.

To catch up in short: the Turtles; Leonardo, Raphael, Michelangelo and Donatello are presented as reincarnated children, their spirits trapped in the bodies of mutated amphibians who were beheaded, along with their father – Hamato Yoshi, in feudal Japan by the warlord Oroku Saki. ‘Shredder’ was put on ice, entombed thanks to alien technology from Krang and reawakes in present-day New York. Eventually, ‘Splinter’ gains his revenge and takes over the foot clan and is now currently running control of New York. Most recently the Turtles until the last month have been hanging out in Dimension X where Krang was on trial for War Crimes.

It was this current storyline of Krang, the tentacle, pink alien Utrom despot that has been looming since the inception of the new series and that culminated in IDW reaching the milestone of longest running TMNT series since 1984 when it began published across both Mirage and Archie comics. At 75 issues and counting, Kevin Eastman and Laird have seemingly brought the teenage ninjas into the 21st century for a modern audience.

Working with all the fan favourites such as Bebop and Rocksteady and the Mutanimals, each character has been allowed time to breathe and shine in their own one-shots and micro-series. April O’Neil and Casey Jones had their own arcs and new threats have been invented to take on New York. The advantage of monthly issues is that the writers can play the long game with payoffs taking years, but well worth the wait.

So successful has the series been, that a number of high profile crossover events have occurred within the comic book reading world, most notably with Ghostbusters. The mash-up of writers and art styles is both a coup for fans, but also a shot in the arm for the current Ghostbusters series that has not been nearly as well received and waxed and waned over the years. As of writing, TMNT ex Ghostbusters 2 is currently available as a weekly print through the month of November.

Parallel to this Nickelodeon run their own comic book series to complement the TV show but one that is not comparable to the milestones reached by IDW in October. 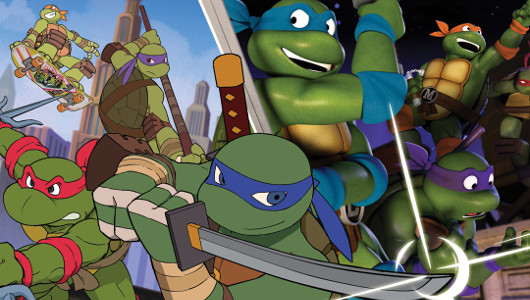 Depending on whom you speak to everyone has their favourite Ninja Turtle and these days most people would have an opinion of the best-animated series as well. Gone are the days where they existed as a cornerstone to 1980s clichés and Americana, instead TMNT in 20003 and more recently 2012 have introduced a new audience to the Turtles progressing them from 2D to 3D animation.

After the classic series that ran only from 1987-1989 television did not see new TMNT until 2003 when a slightly darker, serious interpretation was created in line with their original black and white format. The Turtles were larger, meaner and a reflection of their times.

Flash forward to 2012 and the Teenage Mutant Ninja Turtles have been rejigged again, this time in a less than traditional 3D Kuwaii fashion that mixes memes, self-awareness, cute characters with an edge of self-importance that they are the “real TMNT”. After 4 seasons though and some decidedly odd choices in design for fan favorites like Krang and the Mutanimals, Nickelodeon realized that to keep the show fresh in 2017, all they really had to do was appeal to their fan bases, making season five a parody of story arcs including “the Mad Max Post-Apocalyptic story”, “The Scary Horror Tropes Storyline” and (arguably one of the best) “The Crossover with the 1980s TMNT storyline”

In season four, Nickelodeon took a punt and had a crossover with the 1980’s series animating them for the first time in full 3D and similarly taking the 2012 Turtles back to 2D. It was the pinnacle of modern Turtles but the cherry on the cake was the final 3 episodes closing out the series in November this year. The 80’s Ninja Turtles returned, as did 1980’s Shredder and Krang in all their glory. This was a love letter to Turtle fans and a milestone for the series, well worth a watch if possible, in part because the original voice actors returned. Whilst any modern Ninjas Turtle tends to make fun of their 80’s counterpart as being goofy and uncoordinated there is some great banter between Shredder and his cronies that typifies the writing of that time.

The 25th anniversary direct to TV movie in 2009 went some way to address this with the then current 2003 Turtles also meeting their 80’s brothers but further- going right back to the noir black and white ‘Turtle Prime.’ The exposition of a Nina Turtle multiverse is a great conceit that reflects on all the different iterations that came before. Part of the nostalgia comes from the fact, that historically the 1980’s TMNT series ended after only 2 seasons and was never resolved left with a cliffhanger that has been returned to twice now in the last 30 years. 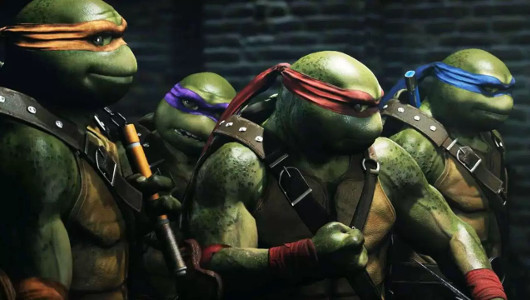 Finally, this all leads to the surprise in November no one saw coming, that early next year gamers will be able to control and play all 4 Turtles in Netherealm Studios’ brutal superhero brawler Injustice 2. This is another coupe for longtime fans, and fans of both Mortal Kombat and Injustice. Not only this, but it appears that the Ninja Turtles in question will be from the 1990’s live-action movies, arguably the most realistic and adult interpretation of the brothers yet. Whether the license ran out on that franchise or Ed Boon simply paid a lot of money for them, the Ninja Turtles can now face off against Hell Boy and Raiden not to mention Batman, Superman and other DC alumni.

More exciting is this opens the door to other (more mature) TMNT video games. Or dare, I say it, a Mortal Combat-esque TMNT fighting game. It is also proof that contrary to popular opinion it is possible to play as all 4 Turtles – in one character – switching between weapons and fight styles on the fly. With games like Batman Arkham Asylum opening the door for respectful, darker, brutal fighting action adventure games that extend and grow their franchise…one can only hope. Fighter pack 3 also comes with The Atom & Enchantress

Over a few short months, the Teenage Mutant Ninja Turtles have been hitting milestones left and right. When 2017 started, this writer couldn’t have imagined what was in store and couldn’t be happier.

Nickelodeon has already started promoting their new brand new “Rise of the TMNT” series for 2018 that is reincarnating the ninja Brothers once again in 2 Dimensions for the next generation. Exploring the more ‘mystical and magical’ underground elements of New York City the future is bright for the erstwhile teenagers, so sit back, grab a slice of pizza and enjoy!