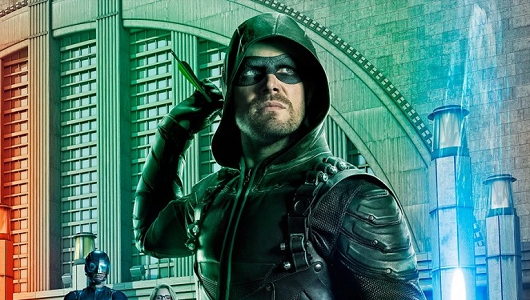 In the mid to late 70’s a band called KISS rose to prominence in the still quite new heavy metal scene. Covered in signature makeup and utilising costumes and theatrics they weren’t really doing anything new (Alice Cooper had been doing something similar for years before), but KISS did it bigger, and people loved it. Then in 1982 they began performing without makeup and costumes, their music became softer, and people fell out of love for them. They weren’t KISS anymore, they were just another rock group. It wasn’t until 1996’s reunion tour when they brought back the costumes and makeup that KISS were truly KISS once again.

The point of this little lesson in rock history? Arrow is a lot like KISS.

When season one aired back in 2012 it was nothing new, in fact it was essentially a drawn out, lower budgeted version of Batman: Begins with a murderous Robin Hood, but people loved it. At a time where the term Superhero Fatigue was beginning to be whispered by the talkative masses, Arrow managed to shine out and create not just a franchise, but an entire television universe. And with season two taking it to the next level these were truly the glory days of Arrow.

Then seasons three and four happened. And just like KISS removing their makeup, removing what quintessentially made KISS KISS, Arrow, a series that prided itself on being a ‘grounded’ superhero show introduced magic to the mix, and it all started to go wrong.  Ratings dropped, fans abandoned it, even the show’s own subreddit was famously changed into a Daredevil forum by fans. 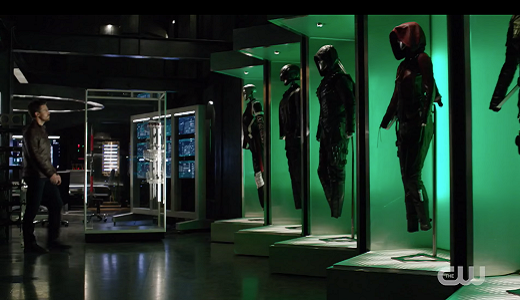 In response to this Greg Berlanti and his writing/production team decided to take the show back to its roots, putting on the metaphorical makeup as it were, and re-grounded the show. Making it darker, grittier, and more like the Arrow fans fell in love with in the first place. And for the most part it works, this season is definitely the best in a while, but it also shows the glaring holes in the show as a whole.

The season picks up a few months after the events of season four. Team Arrow has disbanded, and Oliver is now struggling to balance his dual lives as both mayor of Star City, and the hooded vigilante Green Arrow.

Prompted by everyone still in his life he puts together a new team, now consisting of Rene Ramirez/Wild Dog, an ex-marine with a love of ice hockey and firearms; Curtis Holt/Mister Terrific, a tech nerd with a T on his face who keeps getting beaten up; and Rory Regan/Ragman, the lone survivor of the nuclear blast from season four who wears a suit of magic rags. I am not making this up.

The emotional beats this season focus around Oliver learning to trust the new recruits, as well as explore the back stories of each member and what caused them to turn to a life of vigilantism. It’s the same overused Arrow story yet again, and as much as I love Rene’s character arc (it’s honestly the most compelling story of all the new guys) and even grew to love him, we’ve seen it all before each and every time someone new wanders into the Arrow Cave. 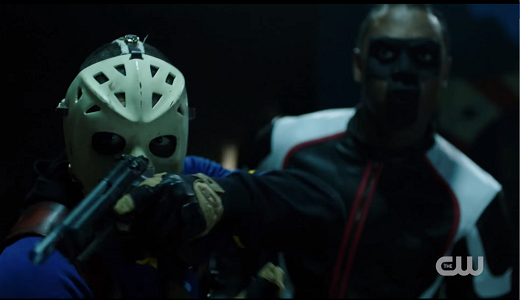 The conflict elements of this seasons story come in the form of Prometheus, an archer (yes, another one) who is equally skilled in fighting and the ways of combative theatrics as Oliver is. I enjoyed the cat and mouse elements of the Prometheus story, although it is painfully obvious who is under the mask right from the second they walk into frame thanks to some serious scenery chewing on the actors part.

I enjoy what they were trying to do with the Prometheus; creating someone who is essentially the anti-Oliver and making them act like Oli did in season one to show how much he has changed for the better over the last five years, but Prometheus constantly breaks their own rules and there’s a level of hypocrisy to the character that, although intentional, doesn’t sit right with me.

Another issue I have with this season’s big bad is the reveal – it is absolutely awful. There’s no build up or impactful moment, it just kind of happens, for absolutely no reason other than to inform we, the viewer, of something we already figured out. It is definitely the weakest reveal of the entire series so far, and deprives the season of it’s ‘wow’ moment.

The flashback story this time focuses on how Oliver became part of the Bratva, a question we’ve wanted answering since season one. David Nykl returns as Anatoly Knyazev from season two, and the one and only Doplh Lundgren plays that arc’s big bad, Konstantin Kovar. The flashbacks are is easily the most interesting story of season five as they answer a lot of questions about how Oliver became the man who went back to Starling City five years ago, including how he got back to the island after not actually being there for three of the ‘five years on an island’ claim. A plot thread that is tied up so poorly it’s laughable. 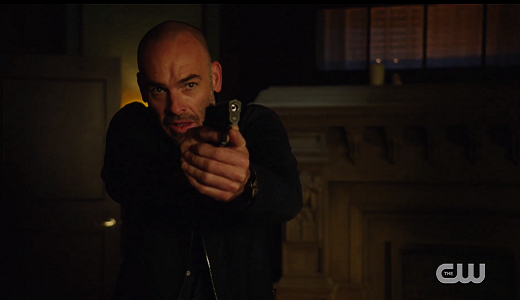 Watching this season on blu ray it is painfully apparent that Arrow works best as a week-by-week show as the pacing is all over the place, with internal team conflicts being resolved almost instantly, and episodes ending on a cliffhanger have absolutely no impact as they too are sorted out within minutes of ending.

This season is full of confusing moral dilemmas, the most notable being the team’s attitudes toward killing. A big part of the story focusses on Oli’s history of killing and how the new team aren’t entirely comfortable with, essentially, working with a murderer. Yet we see countless missions where Wild Dog is firing off automatic pistols with reckless abandon and absolutely no one questions it.

The Batman parallels are more obvious than ever too, and it’s becoming ever more apparent that The CW really wanted to do a Batman show, but had to settle with Green Arrow. If season one was Batman Begins, this is definitely The Dark Knight Rises.

For a show claiming to be ‘grounded again’, there’s too much of a reliance on CGI for the set pieces that make them look cheap and artificial, and it really pulled me out of the the experience. Firing an arrow that turns into a parachute may work on the pages of a comic, but isn’t something that should ever be explored in live action, especially on a TV network budget. The explosions, too, look like something from a PS1 era cutscene.

This also proves an issue with which characters get what screen time. One of the most interesting members of the team is Ragman (again, not making this up), who spends very little time in costume due to his need to be animated when in action. 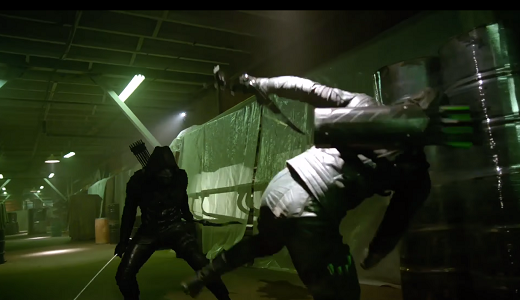 One guy who needs no CGI, however, is Paul Blackthorne as Quentin Lance, and as always is a series strong point. His character this season is dealing with the loss of Laurel (again) and alcoholism (again), and his emotionally driven scenes are so powerful and believable they alone give the show some much needed depth. He is without a doubt one of the most underrated character actors working today and I genuinely hope they give his character a break next season.

The crossover episode is interesting, but without context just feels out of place. And as mentioned in my review for season two of Legends of Tomorrow, this box set only comes with the Arrow specific episode, so if you want to see the full thing you’re going to have to buy the other three collections. Which is a huge shame because this episode ends on a real cliff hanger.

The other extras fare a little better. On top of the usual deleted scenes and gag reel there’s a rather hefty Comic Con panel teasing the season, and three mini documentaries. The first being about the Arrow part of the Invasion! Crossover event, which just happens to be the one hundredth episode, and another showcasing the new members of Team Arrow.

By far the most interesting of the three though is about Prometheus. The in depth explanations and analysis of why he is the way he is and acts the way he acts make him seem much deeper than how I interpreted him to be in the series. I feel that if I’d have watched this first my appreciation of the character would have been far greater.

Arrow season five isn’t bad by any stretch of the imagination, it’s just ‘fine’. And that’s its biggest problem. Instead of exploring the Green Arrow’s vast library of villains (something The Flash has absolutely nailed), we just get another archer, and rather than trying to do new and exciting things it reuses story beats we’ve seen in every other season before it and brings absolutely nothing new to the table. The whole thing feels rehashed, and although better than the previous two seasons it isn’t anything to special.

I believe this is it for Arrow now because The CW have a habit of finding a formula that works and running it into the ground. Just look at the once-great-now-just-fine Supernatural. It isn’t bad television, it’s just safe. It’s the television version of that porridge Goldilocks had for breakfast one time. It’s the equivalent of shrugging and saying “Not bad” when someone asks you how you are, and I predict that this time next year I’ll be saying exactly the same thing about season six.