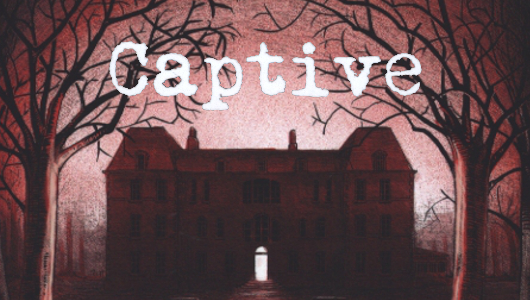 I am excited to say that today we are looking at Captive, a rather different kind of game than any I have looked at before. For one, it’s a book, not a board game; and a graphic novel at that. But it’s still a game! Intrigued? You should be! Read on to find out more….

Firstly, let’s look at the cover. 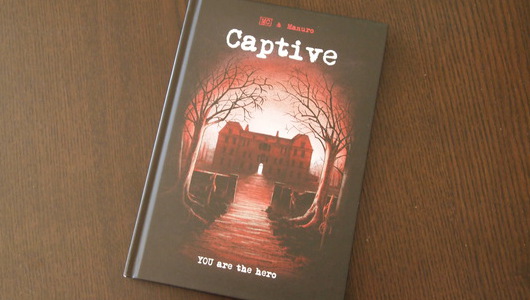 That mansion draws you in. The title, “Captive,” captures your imagination. Who is a captive? Who is holding them? What is happening in that mansion? The back cover just rounds everything out perfectly. 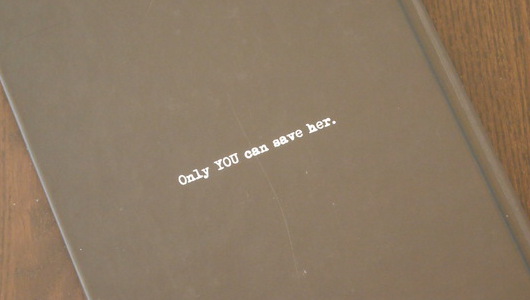 I tell you, I couldn’t stop myself picking this up to play. You discover the basics pretty quickly: your daughter has been kidnapped. You bring the ransom out to the mansion, only to be immediately attacked by the hooded kidnapper. Only your quick reflexes are able to save you. Now it’s up to you to find your daughter, and to unravel the mystery of the mansion.

At its core, Captive is a choose-your-own-adventure type book you may remember from your childhood. The type where it asks whether you want to go left then turn to page X, or right and turn to page Y. But Captive is a graphic novel, which means it refers o comic panels rather than pages and crams much more into its slim page count. Sometimes you’ll jump to a single panel, occasionally a multi-panel, and many of the page numbers are incorporated into the artwork 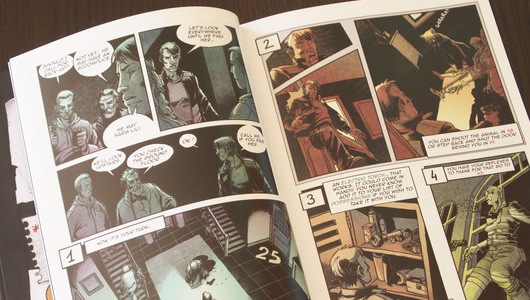 That works great! But even better is how there are much smaller numbers hidden in many of the rooms you’ll explore. These are the things you find, spot or discover. You can move in closer to investigate. You’ll find items this way that you can carry and possibly make use of later, notes and journal entries containing key clues and background so you can figure out what the hell is going on. This is a fantastic element of the game. They are not easy to spot, so you’ll carefully study each picture. You’ll return to rooms you’ve been to before and discover things you missed the first time round. It makes you feel like an investigator! And it’s essential to surviving this demented mansion.

The game gives you two things to keep track of: time which advances every time an hour glass symbol appears in a location you visit, and “vitality”, which will drop whenever you get hurt. Which will happen. A lot. 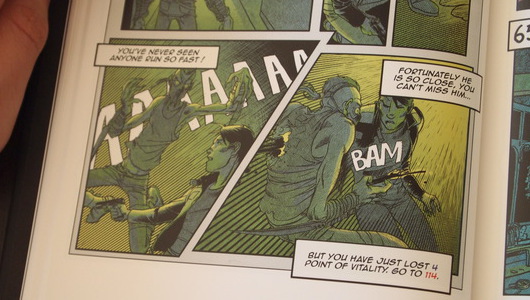 Naturally you’ll die and, more importantly, lose the game if your vitality drops to zero. But don’t worry, there are plenty of things that will kill you instantly too! I’ve been shot, incinerated, stabbed, sliced, poisoned and eaten (in multiple ways). You can die within the first 5 minutes of the game! Don’t expect this to be easy.

There are ways to heal (if you find them) and most of the worst ways to take damage are hidden behind decision points so in many ways, if you die it’s all you’re fault! Except, really, it isn’t. There is rarely any way of knowing what the outcome of a decision will be. Imagine the situation: you’re fighting some deranged lunatic wit a knife, do you dodge left or right? You dodge left, he swings and misses and you shoot him through the eye! Boom! Good job! Or you dodge right, he predicts your movements and slice! You lose 6 Vitality. There’s no way of knowing what to do except through hard earned experience, through trial and error and replaying the game. 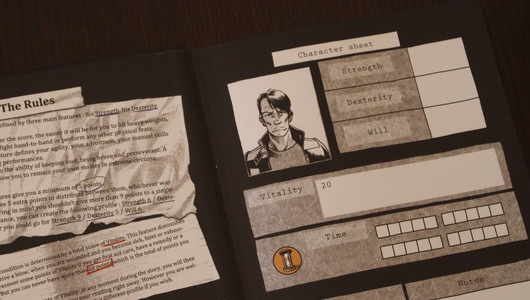 Even worse are the stat tests. The first thing you do in the game, before you even start reading the story, is to decide on your stats. Each of your Strength, Dexterity, and Will start at 5, and you have an extra 5 points to spread between them. This “decision” is tantamount to rolling a dice because whatever you choose, you’re as equally likely to get screwed or rewarded at a later point in the game. Is your will at least 7? Great! No? Oh dear! It’s just another element of trial and error for you to deal with.

This wouldn’t be so bad if the result of doing certain actions were telegraphed in some way. But you don’t have any information. Except for playing it before. What this certainly does is create tension. It also means that when you do play again and come at problems a different way, you feel good for solving them. It’s possible to get through the game without taking any damage at all and discovering these routes is pleasurable. But after playing for an hour or two, getting killed because of a stat choice you made at the beginning of the game is frustrating to say the least. 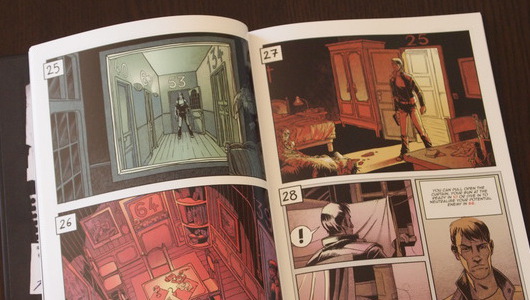 The joy of this game is in the discovery, and once you’ve discovered the main things, painstakingly playing through room after identical room to figure out the optimal path isn’t really something that appeals to me. But you certainly get a reasonable amount of replay value on your way to finally completing the game, at least if my experience was anywhere close to standard.

There are some odd turns of phrase in the writing and the occasional typo where the translations haven’t come across perfectly. Most of these are fine but there is one total screw up: a puzzle that relies on you spelling a word to direct you to a specific panel. The puzzle doesn’t work in English. It only works in French. It’s a disastrous error when your game only contains 3 or 4 actual puzzles to not think through the ramifications of translation to another language. Fortunately, it’s not completely game breaking as there are other routes player’s can take, but it’s still a black mark.

Choose-your-own adventure as a graphic novel is a great idea
A wonderful setting and tone pervades the experience
Hidden clues has you searching low and high over every panel
Progress comes through trial and error
Once you’ve won, there’s little reason to go back anytime soon
One puzzle is broken in the English (and likely other) editions

Captive is a really great concept and I like a lot of its execution. I loved the searching and unravelling of the tragic story of the mansion. The generic Lovecraftian nature of the events is a little uninspired but it does suit the tense, mysterious atmosphere. But the random nature of the experience became more frustrating than satisfying even while I appreciated the clever branching paths nature of the game. If you’ll enjoy the story and exploration enough to offset the unpredictable nature of that exploration, and I definitely came close to doing so when weighing up this review, then give this a look! I would love to see something similar to Captive with a little more refinement done to the system.