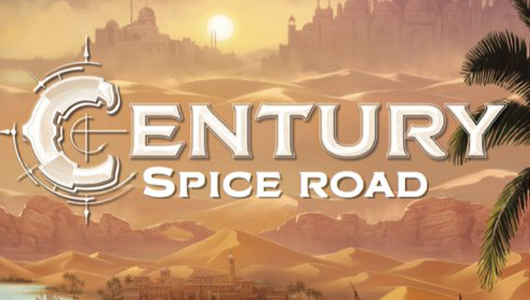 Century: Spice Road is the first game in the Century trilogy, in which all games will be based in different centuries and could be played in combination with each other. There aren’t many details on how that would work exactly, but this shouldn’t be a concern for this discussion. Century: Spice Road very confidently stands on its own legs and, even if future games of the series won’t hold up, this one is a must buy.

Players are in charge of the caravans travelling along the Silk Road, trading in spices. ‘He who controls the spice controls *the Century: Spice Road* universe’! Sorry, couldn’t resist. Turmeric (yellow cubes) is the cheapest spice, then Saffron (red cubes), then Cardamon (green cubes) and finally Cinnamon (brown cubes) is the most expensive. Players use different cubes to purchase Point Cards, which come in an array of victory point values and prices. The first player to purchase five Point Cards (six cards in a 2-3 player game), triggers the last round and the player with the most points wins the game. On their turn, players can do one action, that can either be purchasing the Point Card, or purchasing a Merchant Card (ability cards), or playing a Merchant Card from their hand or, finally, resting. The latter means that the player picks up all cards they have previously played, and puts them back into their hand. The rest action can be done whenever the players feel like it, even if they still have other cards in their hand. 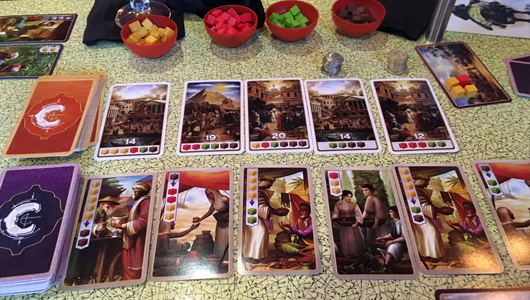 Every player begins the game with a certain number of spices, depending on their player order, and two basic actions: to get two yellow cubes or upgrade cubes twice. Upgrading is a really interesting and an incredibly important mechanic in the game. The action to upgrade, allows players to either change two of their yellow cubes into red or change one of the yellow cubes into a green, for example. Merchant Cards have a wide range of actions that allow players to get more spices and upgrade them in a variety of ways. The mechanic of purchasing Merchant Cards is reminiscent of Small World’s and works very well in Century: Spice Road. As they are laid out in a row of six, the card furthest away from the deck is free, however, if the player wants to purchase any other card, they have to lay down a cube on every card before the one they want to take. If the card already has some cubes, then the player who purchases it gets those cubes as well. This adds an incentive for players to get cards that are maybe not that useful but have a lot of cubes deposited on them previously. 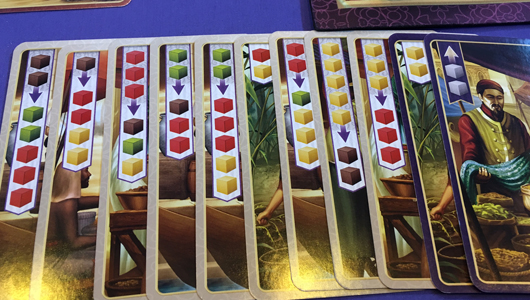 Example of a bad engine

Century: Spice Road is an absolutely beautiful game because its rules are incredibly simple, yet there is so much depth and variation to the game because of the abilities on the Merchant Cards. I named it a ‘gateway game’ and while I stand by my statement, this is also a game that will probably need to be played a few times before you ‘get it’. For example, the mistake I made when playing it for the first time, was to collect a lot of Merchant Cards that seemed good, but without considering their abilities closely. The more successful Century: Spice Road players, choose Merchant Cards carefully to build the engine that can transform spices into other spices they need with a considered sequence of actions while generating more spice cubes at the same time. When the engine has been built well, Century: Spice Road feels absolutely amazing to play, and it is not too hard to build a well-oiled spice generating engine. However, when first playing the game the amount of available actions may feel overwhelming, but by the second try, it is easy to distinguish which cards are better suited for the engine the player is building that turn. 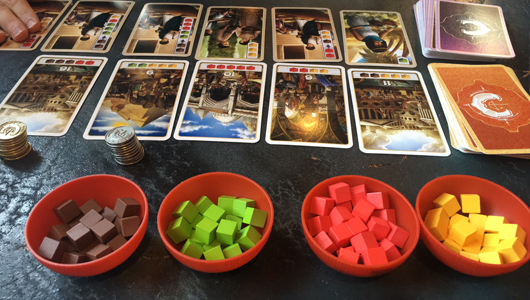 As the cards are dealt randomly at the start, it is absolutely impossible to build the same engine twice and players will have to adapt and, inevitably, even compete for the same cards. Also while one card might not be suitable for one player’s engine, it works well within the engine of their opponent and that flexibility is great. However, with an element of randomness comes a downside or, maybe, a challenge. Building an engine in Century: Spice Road always feels a bit restricting because you never know which cards will come up or if a better card is just around the corner. Think of Dominion, for example, where every player has access to all cards and thus has no restrictions in picking and choosing cards for their Dominion engine. In Century: Spice Road there is a choice of six cards before you, and maybe the next card to be turned over is better, but maybe not.

The bigger shame is that once players complete their engines, they find very little use in buying more Merchant Cards. In fact, then it is a waste of the action, a dangerous thing to do, especially in the game as fast paced as Century: Spice Road. In the beginning of the game, everyone rushes to buy more abilities, but towards the middle and end of the game, new Merchant Cards are pretty much untouched. 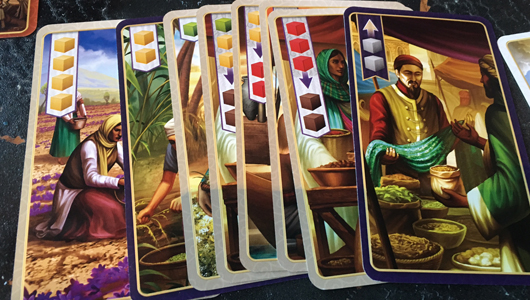 Example of a better engine

There isn’t much player interaction in Century: Spice Road. If the player is about to win, there is very little one can do to stop them, except try to buy the card they’re aiming for before they get to it. However, I don’t think that overall this is a downside, especially since the first person getting the fifth card may not be a winner, once the points are counted. There is also still a lot to pay attention to. For example, which Point Cards the opponents are trying to get or which Merchant Cards they are picking up. Moreover, the turns are so fast, that there is no time to get bored. The game flows absolutely beautifully, and it doesn’t matter whether it is a full roster of five players or just a two player game.

As for the winning strategies, there seems to be two routes: either buy small point cards that are cheaper, to finish the game quickly before you opponents have a chance to catch up or aim for the big value cards with bonuses. Yet after playing, Century: Spice Road almost obsessively with a different group of people, I can’t help but think that the game hasn’t been perfectly balanced. The players who went for the first strategy – buying cheaper cards and finishing the game quickly – have never managed to win. Players that went for the bigger value cards, even if they had less overall cards at the end, still managed to come ahead of them. So either the cheapest cards should be even cheaper or their values should be slightly larger. 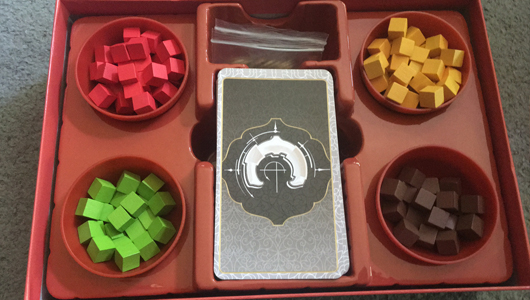 Century: Spice Road is beautifully illustrated by Fernada Suarez with very Eurogame style artwork. While the spices are just wooden cubes, the game also includes carefully crafted coins and bowls for the spices, which add to the overall component value of the game. I would also like to praise the game box, where every component has its space and bowls of spice cubes fit perfectly and hardly ever get spilt in the box. There is also a play mat that can be purchased separately from the game, that is helpful, but not essential.

From the very first time I played Century: Spice Road at UK Games Expo, I knew this game had its hooks in me. It is simple to learn, yet has deep and flexible gameplay. The theme, while not intrinsically linked to the mechanics of the game, fits well, especially with the Century series it is setting up. While the comparisons to Splendor are unavoidable, these games don’t cancel each other out, but rather complement. Splendour might be slightly more elegant to its engine approach, but Century: Spice Road is more complex and varied. I wouldn’t be surprised if we see Century: Spice Road as one of the Spiel Des Jahres contenders this year, and this would be well deserved.