Review: Guardians of the Galaxy Vol. 2

The original Guardians of the Galaxy was a one of the biggest risks Marvel studios have taken in their rise to cinematic supremacy. The much awaited sequel to their funniest film is everything a good sequel should be, more laughs, more action and more Groot.

GOTG 2 opens with our heroes hired to protect a dangerous power source from a huge pink, fire spitting, space monster primarily comprised of tentacles and teeth. From the word go they bicker, misunderstand and generally annoy each other. Drax is foolish, Rocket is sarcastic and sweet Baby Groot dances to ELO’s Mr Blue Sky as battle rages around him. In case you were in any doubt if James Gunn and company could make a satisfying sequel to the most inventive entry in the MCU the answer is most definitely yes.

After that opening set piece and musical number, the guardians find themselves on the run from the gold plated and rather stuck up rulers of the planet Sovereign. Outnumbered and outgunned, they’re saved by a mysterious stranger calling himself Ego, played by Kurt Russell, who also claims to be Star-Lord’s father. Considering the revelation of Peter Quill’s nonhuman parentage felt like it was crammed into the tail end of Guardians 1 just to make the final confrontation work, this film does a rather good job of making it feel thought through and significant in the grander scheme. The story isn’t exactly complicated and what twists there are aren’t earth shattering but there is is nice sense of mystery to the story. You can probably guess how things will end, but the hows and why are the fun part.

Fun is most definitely the order of the day with this film. All the returning characters are a delight, each given a decent amount of screen time and a chance to generate some laughs. The jokes come thick and fast for the length of the film and even at the most emotional points, and there definitely are some surprisingly heartfelt moments. 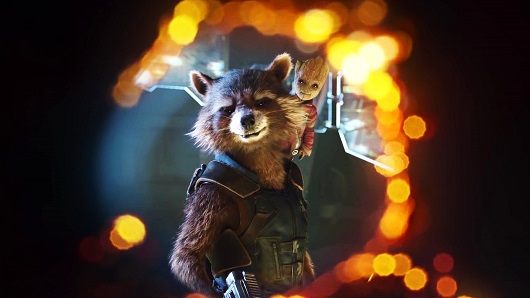 This guy’s feeling something in his heart…

The last marvel movie with such a big cast was Captain America: Civil War and the climax to that was so devastating because of the dozen films worth of back story required to shape it. That Guardians Vol 2’s ending manages to reach highs and lows after only one previous movie is a triumph. The first Guardians movie was so good partly because no one expected it to be the best Marvel film, but the sequel manages to expand on everything that made the original film great and compensates for the areas where the first film felt weakest.

The villains in the original Guardians were boring as the MCU has seen, second only to the antagonist in Thor Dark World for total forgetability. Without wanting to spoil who the actual enemy turns out to be, suffice to say that they’re given actual character and screen time to develop into someone you feel for even as you want to watch the Guardians rip them a new a-hole. Zoe Saldana as Gamora definitely had the least to do in the last film, but in Vol.2 the subplot with her sister Nebula, played by Karen Gillan, does some much needed character building for both of them. These two actresses were criminally underused by the films previously and it’s nice to see them given the amount of screen time they deserve.

Dave Bautista as Drax is still a riot and changing his character from angry idiot to happy go lucky idiot does wonders for his likeability. Bradley Cooper does something similar for Rocket, showing his soft side as well as delivering explosions and expletives. Pratt and Saldana are effectively the straight man and woman of the group but even they get a chance to flex comedic muscle. I was worried from the trailers that the adorable Baby Groot would get tiring but he’s used just sparingly enough that he remains both cute and funny. The real star turn is from Michael Rooker as Yondu. Star Lord’s estranged mentor/kidnapper was a fun side character in the original but in the sequel he gets what can only be described as tragic pathos on top of chewing the scenery with his space-pirate-meets-redneck-routine. 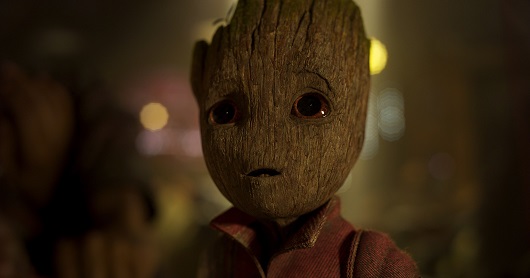 Kurt Russell as Ego is inspired casting. He not only looks enough like Pratt that their connection is immediately believable but Pratt has basically been channelling Russell into his performance the whole time anyway. If Guardians has been made in the 80s then we’d probably all know Peter Quill as Kurt Russell.

The visual quality of Guardians of the Galaxy Vol. 2 is exactly what you’d expect from a big budget sci-fi film in 2017. Slick and expensive looking and as close to photorealistic as we’re ever likely to see. The space battles are bright and spectacular and thankfully colour coded so you always know who is shooting at who. But like the previous film it also makes fantastic use of practical effects and makeup at the ground level. In much the same way that Star Wards Episode 7 mixed the best of both worlds into its unique visual style, Guardians uses whatever works best in the moment to make its world feel believable as well as fantastic.

It really is fantastic, from start to finish. Guardians of the Galaxy Vol. 2 is exactly the sequel fans of the original have been waiting for and one of the best films in the MCU canon to date.

The author paid to see Guardians of the Galaxy Vol. 2
Official Movie Site