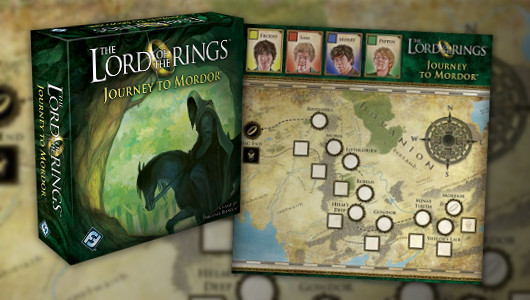 Review: The Lord of The Rings: Journey to Mordor

I was excited to play The Lord of The Rings: Journey to Mordor. I like the Universe (both book-verse and movie-vers), it’s a rich world that can be adapted to many board game genres. So why not a push your luck dice rolling game? Straight off the bat, I’d been encouraged by the gorgeous box cover depicting one of the Nazgul, displaying a formidable demeanour across a hopeful bright and landscape. However, mostly everything else that followed was less encouraging.

In Journey to Mordor, players take on a role of one of the four infamous Hobbits – Frodo, Sam, Merry and Pippin – who have the most important and dangerous job to do: carry the One Ring to Mordor to destroy it within the fires of Mount Doom. The Hobbits are being pursued by Nazgul and Orcs but luckily, they also have Gandalf and the Fellowship of the Ring to help them out.

Despite what one might assume from the knowledge of the story, the Hobbits are not working together to destroy the Ring but in fact, they are competing against each other in this task. Whoever reaches Mount Doom first is the winner, unless the Nazgul catch up with them. On their turn, each player rolls the dice (starting with all 5 die). Then players must set aside at least one die per roll but cannot keep a die with the same symbol, and they have to keep Nazgul if it has been rolled. All dice outcomes are marked on the paper pad to show the progress of Hobbits and Nazgul. The dice outcomes are also pretty easy to grasp. The ring progresses Hobbit further on their circular track towards Mount Doom. Nazgul advance on the square track but Gandalf divides unmarked Nazgul tracks into two spaces, slowing down the Nazgul’s advance. Orcs cancel out the Ring die outcome but in turn, the Fellowship symbol cancels out the Orcs symbol and (finally) the White Tree symbol allows to end the turn without a player having to roll any remaining dice. The White Tree symbol is also, arguably, the most useless symbol in the game. 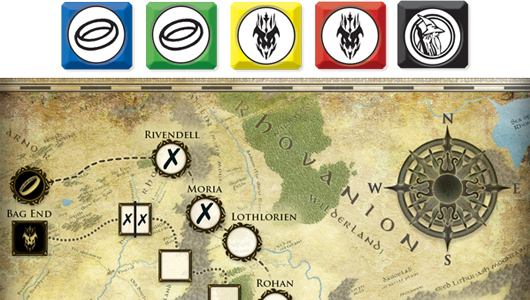 Colour of the dice is also important (kind of) as every Hobbit is assigned their own colour. For example, Frodo is yellow. The colour is irrelevant for any roll, but the Nazgul roll. Nazgul die affect players of the corresponding colour. Say Frodo or the yellow player rolled a green coloured Nazgul. This won’t advance the Nazgul track of the yellow player, but it will essentially send a Nazgul chasing after Pippin (i.e. the green player) and advance their Nazgul player track by one point instead.

This mechanic is probably the most successful part of the game as it allows players to be more considerate in which dice they choose to keep and re-roll. It is also a good mechanic for player participation. There has always been some fun bargaining when players try to convince the active player (i.e. the player who is currently rolling the dice) to re-roll dice with Nazgul of their colour or attempt to roll a Nazgul of a particular colour to try to take out the player who is currently in the lead. It also led to some humorous situations. During one of our playthroughs, Frodo kept sending Nazgul Sam’s way throughout the game, which we felt was quite fitting as Sam was always trying to deal with Frodo’s messes.

In general, the four player version of Journey to Mordor is very enjoyable. It doesn’t outstay its welcome. It is easy to teach and quick to learn for players with different levels of predisposition to board games and gets everyone involved with the game. While playing it, our group had many laughs. Inspired by the game, we came up with many humorous tales of what has been delaying our Hobbits in Rivendell and how the Middle-earth has been overrun by Nazgul. Unfortunately, and as much as I would like to say otherwise, this is the last positive point I can raise about this game.

Even though the game is advertised for two to four players, the rule book is not particularly clear on the two/three player rules. It is easy to make an assumption, as the game does specify rules for when the players are taken out of the game (i.e. when their Nazgul track is full). However, more clarification is required. Even so, the two player or a three player game never plays as well as the four player version. The mechanic of sending Nazgul to other player becomes less important and, as I (and other players in my group) found it to be the most enjoyable and interesting part of the game. So decreasing its effect immediately brought the gameplay down. 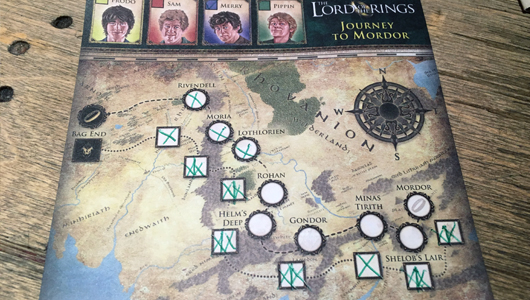 Now let’s address the tear away pad sheets on which the progress of both Nazgul and Hobbits are marked. There is a substantial number of them in the box and they are double sided extending the longevity of the game somewhat. However, unless these sheets are laminated and used with non-permanent markers (add that expense on top of the cost of the game) or unmarked sheets are photocopied (questionable), the sheets will eventually run out, making the game unplayable. I can understand the games like 7 Wonders having a finite number of scoring sheets as part of their package. These are definitely helpful for counting points and speed up the end of the game resolution phase, but they are also not essential. A simple piece of paper and a pen could replace them when they do eventually run out. In Journey to Mordor, the tear away sheet is the main game map. In fact, I will argue that it is one of the main attractions of the game. The map artwork is gorgeous, authentic to maps in Lord of the Rings and has Hobbit portraits (not essential, but appealing to have). Replacing that with paper and pen, while possible, distracts from one of the selling points of the game. Since I enjoy the full four-player version of the game, I already went through a good number of those sheets. I suspect many other players will have the same issue, as the game is genuinely a good push your luck game with four players.

It wouldn’t be that much harder to print the maps on the thicker cardboard and use tokens to mark the progress. Yes, that would increase the cost of the game, but it would also increase its longevity and, frankly, its appeal.

I will also add that The Lord of The Rings theme is not integral to the game. It fits, just about, but the mechanics could adapt to any other franchise and Universe just as easily.  It could be Harry, Cedric, Krum and Fleur, the Triwizard Champions from Harry Potter series trying to reach the Goblet of Fire while being chased by various magical monsters and spells. Replace Gandalf with Dumbledore. It could be Emmet, Wyldstyle, Batman and Unikitty, from The LEGO Movie, trying to deliver the Piece of Resistance to stop the Kragle, while Lord Business’ robots are chasing after them. Hey, it makes just as much sense that those four don’t work together to achieve their task as Hobbits not working together to deliver the Ring. Replace Gandalf with Vitruvius. I could go on. 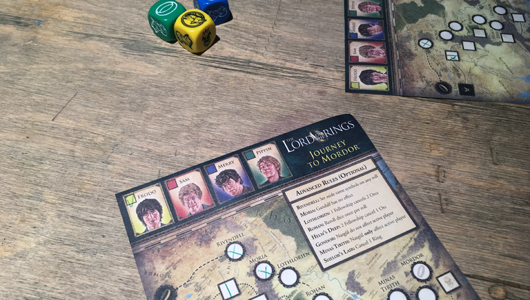 Finally (and for this I’m putting my big thick nerd glasses on), there are inconsistencies on the map. While I accept that it is silly of me to nit-pick on that, the logic of location names confuses me. We have Bag End (Bilbo’s Home, in Shire, the country), then Rivendell (a city), Moria (a city), Lothlorien (forest but also a city), Rohan (a country, one of their cities would be Edoras), then Helm’s Deep (technically, a keep, but also part of Rohan, not a separate location), Gondor (also a country), Minas Tirith (capital of Gondor, why is it a separate location, I am so confused!) and finally Mordor (if the objective of the game is to drop the ring into Mount Doom, why not display that name on the map instead?). If the counter-argument to this is that the names were picked to satisfy more casual Lord of the Rings fans, then why choose ‘Bag End’?! Wouldn’t ‘Hobbiton’ or ‘Shire’ be more recognisable for the movie watchers? Those names come up more often than ‘Bag End’! Finally, why are cities marked as separate locations to the countries they are a part of? Wouldn’t it be easier just to keep all locations to the names of the cities, for consistency sake? It is silly that I am bothered by this, yet I am.

The Lord of The Rings: Journey to Mordor, the four play version, is a really good, fun push your luck dice game. In fact, if I was to review just this part of the game, the score would read 4/5 barrels. It is one of those almost perfect warm-up quick sociable games that I am always on the lookout for. However, add to that the uncertainty of two/three player game rules and the tear away sheets, and the fact that the game’s theme doesn’t exactly fit, and the score goes down. I would love to recommend it on the basis of four player game alone, but it promotes itself as a 2-4 players game. Yet I feel that some of the game’s mechanics and components were not well thought enough to satisfy sneaky tricksy hobbitses that we are.