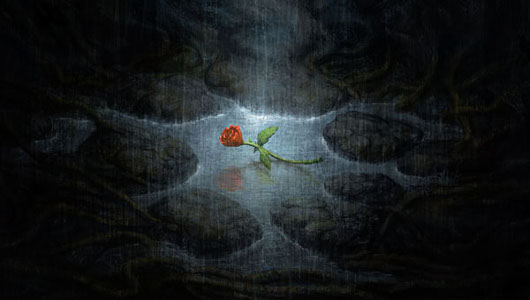 Amnesia: The Dark Descent became something of a cult hit when it was released a few years ago, being touted as one of the scariest games ever made. Developed by Frictional Games – the creators of Penumbra – The Dark Descent also spawned an expansion – Amnesia: Justine – and an indirect sequel in the form of Amnesia: A Machine for Pigs which was developed by The Chinese Room.

After years of being a PC exclusive, the complete Amnesia Collection has now come to terrify console gamers with a neat little package that is well worth your time if you’re a fan of psychological horror.

It should be said right away that the main star of the Amnesia Collection is Amnesia: The Dark Descent. The game is positively oozing with atmosphere and psychological mind tricks in order to immerse you and terrify you at the same time. Game-play sees you playing as a man named Daniel who is suffering from amnesia. You find yourself in the darkened halls of a castle and it’s your job to find clues in order to find out why you’re there. You’ll begin to piece together what’s going on by finding notes and solving puzzles, all whilst being stalked by monsters that you have absolutely no defence against. 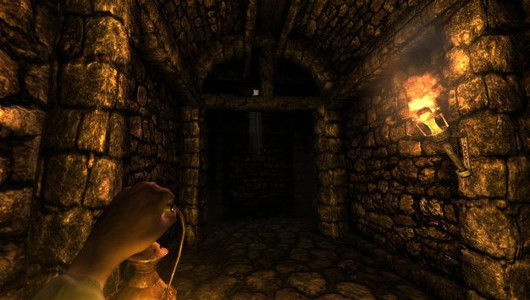 Amnesia: The Dark Descent is all about running and hiding if you’re spotted by any of the horrors stalking the castle. Having no way to defend yourself invokes a real sense of dread whenever you encounter something that is quite content with murdering you. Doors have to be physically opened and closed by holding R2 and moving the analog sticks. There’s nothing more terrifying than frantically trying to open a door whilst being chased only to push on it instead of pulling it. You can also pick up objects in the environment to help barricade doors or throw chasing monsters for a loop – though this tends to be futile.

As well as the monsters, your own sanity will begin to affect you. Witnessing unsettling events, standing in darkness or staring at monsters for too long will start to blur your screen and cause you to lose focus and panic. It’s disorienting, but you can regain your sanity by standing in lit spaces – which in turn will make you more visible to monsters – or by solving puzzles, and being injured by a monster will force you to seek out health vials.

You can also light up the environment using tinderboxes that you can find in the world or by using oil in your lantern, but both of these are finite and should be used sparingly.

The Dark Descent is undeniably scary, and the amount of times I had to pause and take a break in 10 minute stints reinforces that fact. Before even starting the game you’re warned that you’re able to quit at any time and not to worry about saving your progress. 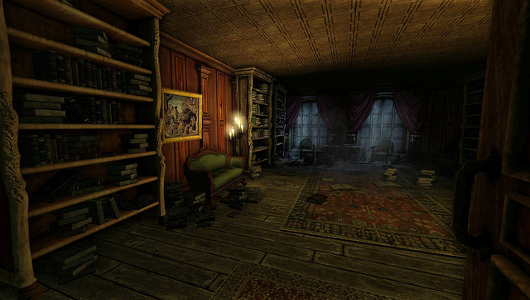 Standing on its own, The Dark Descent is more than worth the price of admission alone. But having an expansion pack and another game on top of it should be the icing on the cake. Except it isn’t.

Amnesia: Justine is short and sweet and is a good little follow up to The Dark Descent, but it won’t hold your attention for long. Amnesia: A Machine for Pigs on the other hand takes the formula that made The Dark Descent good and dumbs it down a lot. The sanity system is gone which takes away a lot of the tension and things such as tinderboxes and oil are also gone which removes the need to play conservatively.

Game-play is similar in a lot of aspects to its predecessor – progressing through levels whilst avoiding monsters, but level design feels less claustrophobic and contained which was part of the charm of The Dark Descent. Even being injured doesn’t pose much of a risk as your health slowly regenerates over time.

Whilst A Machine for Pigs offers up a few scares and might cater to a handful of people, it feels like a step back compared to its sinister older sibling.

Amnesia: The Dark Descent is stellar
A terrifying psychological journey
Amnesia: Justine is short, but sweet
A Machine for Pigs lets down an otherwise great package

Overall, the Amnesia Collection is a great deal for what you’re getting and you should absolutely pick it up for Amnesia: The Dark Descent alone. Amnesia: Justine is a good – but short – follow up if you’re craving more and Amnesia: A Machine for Pigs is there if you’re so inclined, even though it’s a bit of a step back. If you’re into psychological horror and you own a PlayStation 4, look no further than the Amnesia Collection.