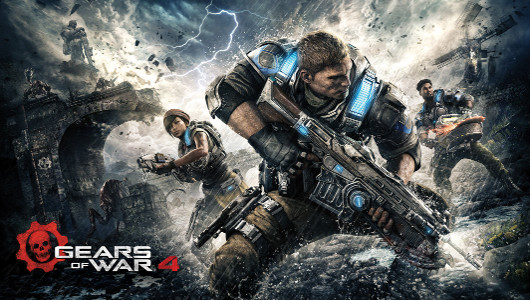 A new Gears of War title has been a long time coming. The monumental disaster that was Gears of War: Judgement at the end of the Xbox 360’s life cycle has had many craving a return to form for the legendary series. Thankfully, Gears of War 4 isn’t only the game many of us have been waiting five years for, it’s one of the best exclusives available on the Xbox One full stop.

Gears of War 4 has three different flavours that players can indulge in, campaign, horde and competitive multiplayer.

Campaign sees you step into the shoes of J.D. Fenix – the son of the renowned Marcus Fenix – 25 years after the events of Gears of War 3. With the Locust horde defeated, humanity is slowly rebuilding under the guidance of the new Coalition of Ordered Governments – or COG, for short.

The game introduces two new enemy factions into the fray, the Swarm and the DeeBee’s – robotic “peacekeepers” developed by the COG. You’ll encounter new enemies with names such as Pouncer and Snatcher – and yes they’re terrifying – that will aim to make your life hell. But with new enemies comes a slew of new weapons to dismember and decapitate them with. From the Enforcer submachine gun and the Overkill shotgun to the brutal Buzzkill and Dropshot, there’s something for everyone and the new weapons all feel great to use. Of course there are still the classics such as the Gnasher shotgun and the trusty Lancer to help you along the way too. 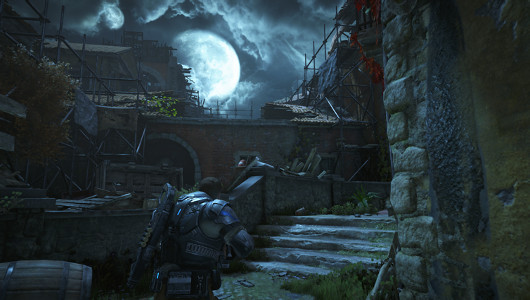 The game takes place over five chapters that offer around 8-10 hours of gameplay depending on how quickly you make your way through. Alongside J.D. you’ll be accompanied by Kait and Del who offer a great deal of personality and quirky one liners that makes Gears of War 4 feel a lot more human than its predecessors. You’ll also run into a few familiar faces along the way too. It feels less gung-ho and more personal – yet dark – as you grow to care about these young characters who are just trying to get by in a world trying to rebuild. The voice acting is superb, environment design is a perfect balance between destroyed gothic structures and new shiny city settings and the story is paced very well until the last act when things just end rather unexpectedly.

There are a few moments during the campaign that begin to get old very quickly however. The highly publicised wind flare moments where you can use the weather to your advantage happen frequently and are trivial at best. The wow factor wears off after the first time you encounter one, and I found myself rushing through subsequent encounters just to be done with them. 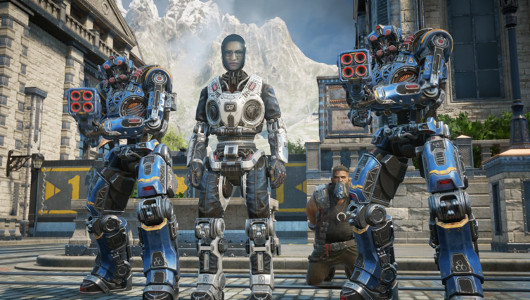 There are a few other moments of repetitiveness in Gears of War 4, but the overall story helps to tie it together nicely.

For completionists there are also a tonne of collectibles scattered throughout the campaign that offer more insight into the world of Gears and what happened in the 25 years between games.

The entire campaign can also be played entirely in two player local or online co-op – although 4 player co-op wouldn’t have gone amiss.

That’s not to say that there is a lack of co-operative gameplay, because horde mode can scratch that particular itch. Five players are tasked with surviving through 50 waves of enemies that gradually increase in difficulty as you progress.

Whilst Gears of War 3 somewhat streamlined the horde experience, Gears of War 4 feels like a natural evolution that gives more freedom to the player. You can choose to spawn in as a variety of different classes who each have different weapons. Soldiers come equipped with a standard Lancer/Gnasher combo, Snipers begin the game with a Longshot sniper rifle which is great for picking off bigger targets, the Heavy comes equipped with a Boomshot, the Scout is great for getting around quickly and Engineers can repair fortifications.

Alongside this class based system comes the addition of gear cards to further equip you before heading into a game. You’ll be awarded packs at regular intervals which awards you cards that can boost the amount of ammo you can carry, how much headshot damage you do and lots of other benefits. You can only equip one card to begin with but once you level up enough you can equip up to five at once. 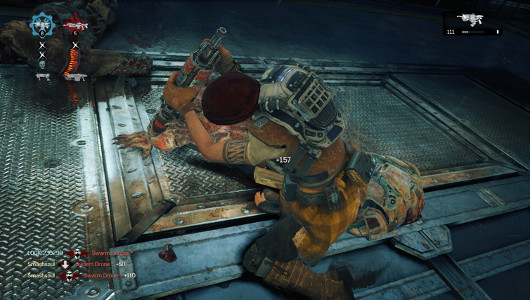 Upon launching into a game you’ll be tasked with moving a fabricator to a location where you want to hold up. The fabricator can be moved during the match too so you’re not locked to one defensible position like Gears of War 3. You’ll be able to buy additional weapons and defense structures such as turrets and spike strips – which can be built anywhere on the map – from the fabricator using the in game currency, which is shared universally with your team. This currency is dropped from enemies you kill and needs to be manually picked up by anyone on your team and banked in the fabricator. Bigger enemies yield more currency and dying drops any you haven’t banked.

Horde defined the co-op wave based survival mode back in Gears of War 2 and it feels like it has been re-defined with Gears of War 4. It’s great fun to play with friends and is unabashed riotous fun.

For the more competitive minded player there are the trademark multiplayer modes here such as Execution that can be played in a ranked or social setting or even against A.I. enemies if you’re like me and not very good. It’s fast paced and frantic like every Gears game before it and many will feel right at home here.

The icing on the cake when it comes to Gears of War 4 however, is the fact that you’re able to play seamlessly between Xbox One and PC with absolutely no fuss whatsoever. Throughout my time in horde I ran into a multitude of PC players whilst playing on Xbox One and there was nothing that would’ve indicated otherwise apart from a small PC icon next to their gamertag.

In a time when games tend to release as incomplete packages Gears of War 4 bucks the trend. Whilst it doesn’t completely revolutionise the franchise there’s something for everyone here and The Coalition have done a fine job of showing that they are worthy successors to the Gears of War franchise. Not only is Gears of War 4 a great game and a return to form, but it’s a great exclusive for the Xbox platform. If you’ve never played a Gears game before you’ll be easily able to pick up and play without any previous experience. The future for the next generation of Gears of War looks bright, and I can’t wait to see what’s next.