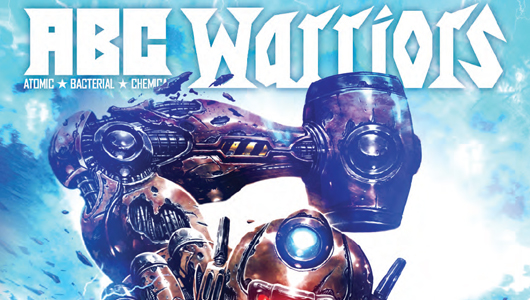 The first time I encountered The ABC Warriors (Atomic Biological and Chemical), 2000 AD’s indestructible robot soldiers, was at the Edinburgh Book Festival. To give you an idea of the sort of person that I am, I am cultured enough to visit the Edinburgh Book Festival but so uncouth that I was only seriously browsing the comic book section of the shop. I have never fully bought into the 2000 AD aesthetic but the art of ABC Warriors: The Volgan War was so unusual and visually arresting that I thought I would give it a punt.

I reviewed some early Robusters in the form of Robusters, The Complete Nuts And Bolts, last year hoping for more of the same interesting art and exciting plot and I think it is fair to say that I was more than a little disappointed. And so it was with some trepidation that I started to read ABC Warriors: Return To Robusters.

Set immediately after the Volgan War, the increasingly maniacal Mr Ten Percent, owner of the Robusters disaster squad, is still rescuing people for profit with the honorable Hammerstein and the stroppy Ro-Jaws doing the heavy lifting. 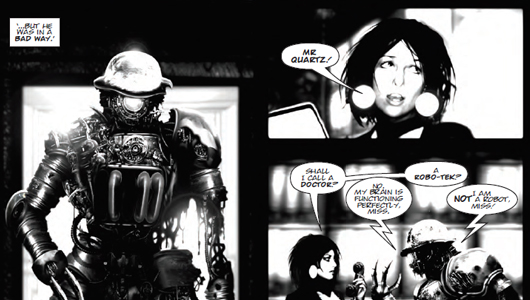 From the first page the art, in gorgeous full colour in places, is luscious and detailed with some pages adopting the almost photorealistic effect used in the Volgan Wars books. The storytelling too is much more modern than The Complete Nuts And Bolts with the art frequently being allowed to drive the narrative without clunky narration to accompany it. 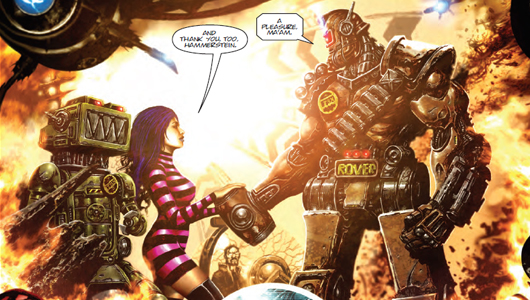 The plot does not make complete sense, including a strange side plot with Ro-Jaws graffiting the walls of Mars with prophetic warnings for reasons I could not quite understand. However, Ro-Jaws’ previously inexplicable ability to defy orders is now explained by the Defiance Code, a plot device that drives things forward as Mr Ten Percent struggles to keep the Robot Investigation Police away from his dubious activities. Similar to The Complete Nuts And Bolts, Return To Robusters touches on some big ideas, particularly the Robots’ identifying themselves with the US Civil Rights Campaign, but never quite explores them properly.

While an entertaining and beautiful book in its own right, Return To Robusters seems to serve as the beginning to a new plot arc for the ABC Warriors and so does not end in particularly satisfying way. However, the biggest endorsement I can give this book is that as soon as I finished it, I wanted to read more. If you want an introduction to the weird and wonderful world of the ABC Warriors, this is pretty good place to start.