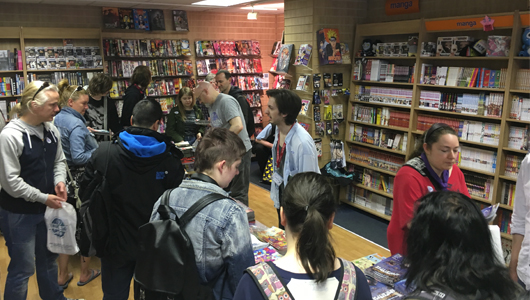 Free Comic Book Day 2016 was almost a month away now and the Big Red Barrel Comics Team have been feverishly reading comics (it’s a tough job but someone has to do it) and so here are our thoughts on six more FCBD comics: 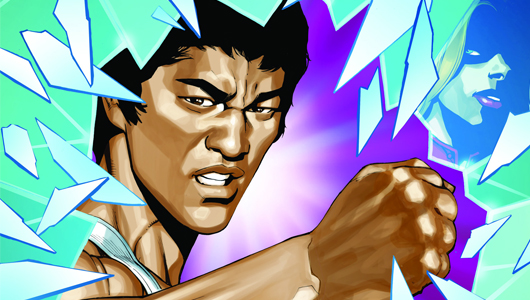 Real people having comic book adventures feels like a peculiarly 1990s thing to do but, despite his sad death in 1973, Bruce Lee is doing it today with The Dragon Rises. And this is the central mystery of the comic, Bruce is supposed to be dead but he is back and beating up the most thinly drawn thugs because he is Bruce Lee.

Reuben’s Verdict: First off, I’d like to say that I have absolutely no idea why this comic exists. Was the world really crying out for a comic book about Bruce Lee being brought back to life by a shadowy organisation for unknown reasons? Almost certainly not, but I’m actually kind of pleased that it exists. The story reads like slightly rubbish fan fiction but the choreography in the panels is pretty good and I did laugh at the comic relief character’s asides about racial profiling. If you can get past the weirdness that comes from a comic starring Bruce Lee (I want to make clear that this is not any kind of character or cinematic incarnation of the man, but supposedly the actual person), then this is quite a fun little comic.
Richard’s Verdict: I’m not much of a martial arts fan, nor does the Bruce Lee branding make this any more appealing. Fun but nothing in this inspires me to read any more. 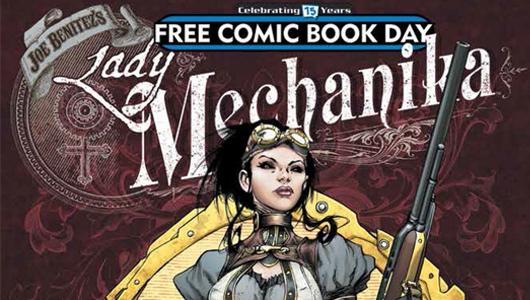 Set in a steampunk Victorian London, Lady Mechanika follows the eponymous heroine as she hunts a partly mechanical creature that may lead to the truth behind her own mechanical limbs and missing memories. Things are unlikely to be straightforward as the nefarious Lord Blackpool of the Blackpook Armaments Co. wants the creature for his own sinsiter and no doubt evil purposes.

Reuben’s Verdict: Steampunk as a genre is something that has largely passed me by but I’ll admit to liking brass goggles and mutton chops as much as the next man, so i went into Lady Mechanika with an open mind and I’m pleased to say that it was perfectly fine. The art itself is very nice, with the facial expressions in particular communicating all that lovely faux-Victorian emotion but the actual design of things I found a little overwrought, which I am aware is the total point of steampunk so I can’t complain too loudly. The three stories previewed therein set up the world and characters well even if they are a little heavy on the exposition text boxes.
Richard’s Verdict: The art is luscious, the plot is exciting and the characters sympathetic. I can definitely see myself picking up a graphic novel if not actually collecting this as a monthly title. Recommended. In fact, since first writing this review I have picked up The Lost Boys of West Abbey #1 from my local comic book shop so watch this space. 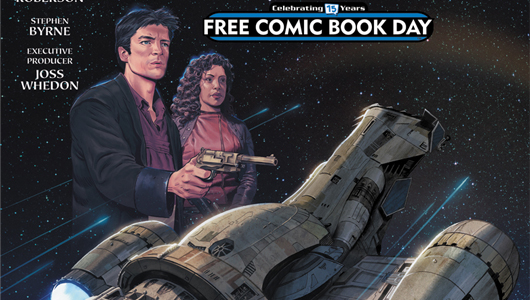 If you have a property to licence and you are not Disney or Warner Brothers (and thus do not have your own tame comic empire to hand), Dark Horse seem to be the comic publisher to call on. This comic collects three licensed stories: Serenity (of greatest T.V. show of all time fame), Hellboy (originally a comic but perhaps better known for Ron Perlman and his prosthetic horns) and Aliens (the Alien, Aliens and Alien3 kind).

The Serenity comic is the love story between Wash and Zoe re-told by River as a fairytale. Hellboy is on his usual occult investigations. The Aliens story is the opening chapter of the Aliens Defiance story, which once again sees the xenomorph menace threatening Earth.

Reuben’s Verdict: This might well be my favourite of the FCBD titles, although technically that is cheating since the stories revolve around licenses and characters that I’m already familiar with. First up is Serenity, if you’ve know the source material then it will be a definite instance of “I’m not crying, you’re crying” which Joss Whedon seems to specialise in.

Then there’s Hellboy, which doesn’t really make sense from a narrative perspective but it’s beautiful and confusing and exactly what you would want from a Hellboy comic.

And Aliens goes hell for leather right out of the gate, with the protagonist fighting off the titular Xenomorphs and giving a quick summary of just how much trouble she and her compatriots are in.

Richard’s Verdict: I have, in the past, bought Serenity graphic novels but, for me at least, they do not come close to capturing the magic of the television series. This is OK and it is nice to revisit these characters but there is nothing here that makes me want to read any more.

The Hellboy story is, well, Hellboy. If you like this, you should pick it up and all of the previous collected Hellboy trade paperbacks as it is all like that.

The Aliens franchise has suffered a lot since the heights it achieved with Aliens what with dodgy sequels, dodgy novels, dodgy video games and dodgy comics. Is this more Alien Isolation or Aliens: Colonial Marines? Hard to tell from this first edition to be honest but this does not do enough to make me buy another to find out. 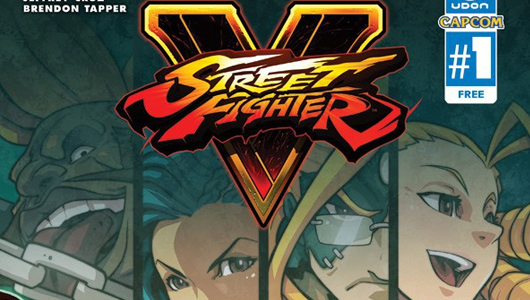 Divided up into three “rounds”, characters from the newest incarnation of the definitive fighting game each find themselves in situations where they must… well… fight.

Reuben’s Verdict: Another completely unnecessary tie in comic which never the less manages to be amusing and at least a little charming in it’s own right. The stories capture the happy go lucky art style and tone of the game’s very weak story elements, so if you have completed what SFV laughably refers to as a story mode and you are waiting for them to patch in the actual arcade mode then this is a good bet.
Richard’s Verdict: Without recognising any of the characters or having any understanding of who they are, there is nothing in here that makes me want to read more. I suspect at least one of the reveals is a big deal if you are a Street Fighter fan but it has no effect on me at all. 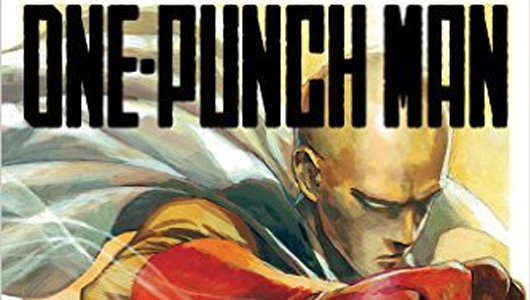 A monster is terrorising the city his name is Vaccine Man and he is the very expression of the polluted Earth. One hero stands between humanity and destruction. What exactly One Punch Man is capable of we do not quite know but you get the feeling he packs quite a punch.

There is also a second manga story My Hero Academia, which introduces us to a number of young hopefuls training at a superhero school.

Reuben’s Verdict: Of all the comic books features in this years FCBD, One Punch Man is the on that excites me the least in principle. I didn’t like the art style much at all and I didn’t see anything to convince me that the gimmick of a superhero who only has to punch stuff once is anything more than a one line joke more suited to a webcomic. There was another story in the back about teen superheros training for an athletics tournament that managed to be laughable and boring all at once.
Richard’s Verdict: I want to like Manga but I have never really been able to understand any of it, so I was not expecting much from these. My Hero Academia was exactly what I was expecting; nothing quite makes sense and seems to assume a level of understanding of the world I do not have. One Punch Man on the other hand has me interested. I have some friends who avidly collect and evangelise about One Punch Man so I might give this one a go. 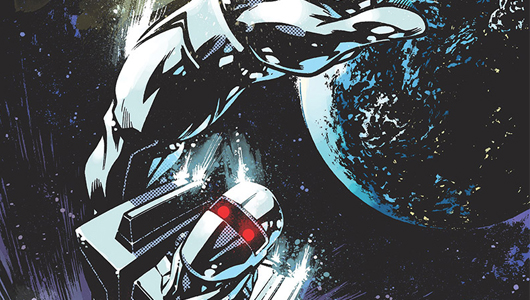 Nighttime in Northern California and two cops race towards a fire, Officers Byers and Ruiz soon discover that this is no ordinary beach bonfire but “Rom the Space Knight” landed on Earth to save humanity from the Dire Wraiths. Very little is established except that there are goodies and there are baddies. Rom is like a high-concept 1990s Saturday Morning cartoon on the page.

The second story in this comic is Action Man. Previously a dress-up doll for boys (but crucially with military uniforms and guns so it was all right) and briefly resurrected as a day-glow orange trimmed action figure in the 90s, Action Man is now the star of his own comic.

Reuben’s Verdict: The reboot literally everyone has been waiting for, even if we didn’t know it. This new version of the classic toaster headed slayer of dark wraiths blends magic and science fiction into a delightfully bananas best of both worlds. The story of Rom the Space Knight travelling to Earth to fight of evil aliens manages to introduce some more relatable human characters around Rom, who speaks like an Arthurian knight despite being a giant silver robot who fires lasers from his hands. Everything about this story oozes silly space opera charm and I’m looking forward to seeing where the story goes from here. The backup story is about action man, who is not as good as Rom. Rom is the best. Rom for president.
Richard’s Verdict: Clearly intended as a children’s comic, Rom promises mystery, adventure, high stakes and excitement. If I was ten years old this would have me gripped.

As a fan of Action Man (and owner of not only Eagle Eyes Action Man but also Talking Commander Action Man) from the plastic underwear and woolen uniforms era, part of the magic was that he was a blank canvas (with a sten gun) for you to tell your own adventure stories with. This story, on the other hand, seems so generic and by-the-numbers that I cannot see anything in here to commend it to anyone.

So there you have it. Reuben and I will try and get a final set of reviews out in the next couple of weeks before normal Big Red Comic service is resumed.