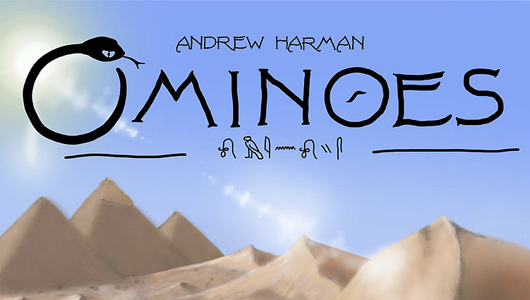 ‘I thought we were friends… until Ominoes’. This sentence has been said many times while playing Ominoes. Now, before you panic into thinking that this new game from Yay Games breaks relationships, let me assure you – this particular sentiment was always expressed while laughing. Or, while trying, usually unsuccessfully, to guilt your would be friend into making a move that benefits you and not your one of your frenemies. This is what Ominoes is about. You laugh, fight, try to cheat, get caught cheating, feigned innocence and incredulity, guilt one of your opponents into helping you, score, then rule the world. In that exact order.

Board games designed by Andrew Harman from Yay Games have always spoken to my mischievous side. I liked his previous game Sandcastles, partly because I got scream ‘I steal your bucket!’ across the table full of grown ups, and I also had a lot of fun playing his first game Frankenstein’s Bodies. So there was very little doubt that Ominoes would be at least on par with the previous games. I was wrong only one one account: Ominoes was better. It is really simple, quick to learn and to play game, that still retains what is the most fun about board games from Yay Games – being a little bit naughty. 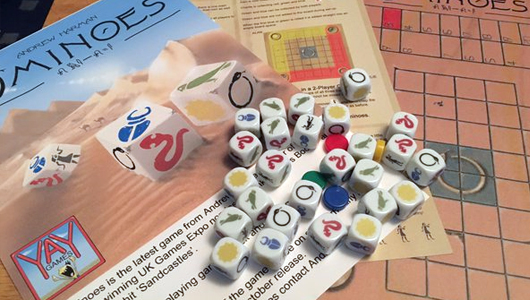 Ominoes are little cubes (not dice!) that players arrange on the grid, included in the game, to make a groups of Ominoes of the same colour to score points. The rules are incredibly simple: roll, move and place. At the beginning of the game every player is assigned an Egyptian God – Horus (green), Apep (red), Ra (yellow) or Khepri (blue). They proceed with placing two dice of their colour on the board, and then the game begins. First step is to roll an Ominoe, the outcome of which will indicate which Ominoe on the board is moved three spaces (second step). So if a player rolls a Horus, he has to first move a Horus that is already on a board three spaces. Third and final step, is to place an Ominoe that has been rolled at the beginning of the turn on the board. There are also to special ‘joker’ Ominoes, that could act as any colour on the board but have their unique actions. When rolling Yay-Ra, the player can move any Ominoe on the board three spaces. Whereas, when rolling Ominotep, the player can re-roll any Ominoe already on the board and return them to the same position. As soon as a group of four or more Ominoes (could be with or without ‘joker’ Ominoes) are arranged on the board, the player of that colour scores and removes those Ominoes from the board back to the draw pool. The first player to 13 or 21 points wins the game.

The game excels with four players. In this case, there is almost always a large group of Ominoes on the board that provides a lot of scoring opportunities. It is also more fun with more people. One of the great things about Ominoes, that a lot of other games sometimes lack, is that the player is always involved in what is happening on the board. The game is so fast paced and the position of Ominoes on the board is ever changing, that in order to win, you have to keep an eye on the board. Possibly to spot an arrangement to could score you points or even see someone else building a group of Ominoes and attempt to stop them. Heckling and distracting people is also a completely valid tactic… in my opinion. 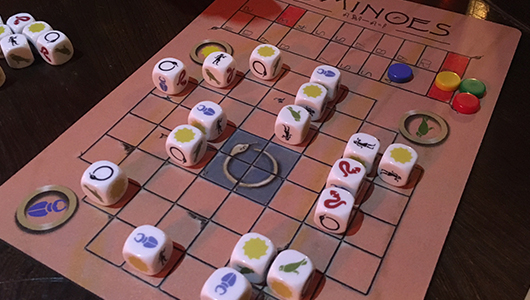 There is also a rule variant for three and two player game, in which players share another colour on top of their own colour as well. This creates an additional opportunity for players to score. At first, I though this would be a detriment to the game, making it not only shorter but also not as satisfying to get a group of Ominoes together. However, it was immediately obvious after playing, that it is just as fun, only you have to slightly adjust your tactics. In a four player game, the players mostly resolve to moving opponents Ominoes as far away as possible from each other, to prevent scoring. However, in three or two player game, this doesn’t work very well. Each player just has too many scoring options: their own colour, two ‘jokers’ and one or two shared colours. Therefore, then the best option is block the opponent from scoring. So while I would suggest playing the game four player, when possible, the game works just as well with less players.

However, what if you were the unluckiest person in the world? What if, while playing Ominoes, no one, ever, rolls your colour? Wouldn’t that feel incredibly frustrating? Blue player rolling Khepris right left and centre, scoring in glorious groups of six, while you are still trying to a get a third Yay-Ra on the board. Now, while this could be possible, I will leave you, statistic nerds, to calculate the probability of that, this is also incredibly unlikely. Also you, the unluckiest person in the world, will have plenty of other stuff to do during your go. This is why joker Ominoes are incredibly important. At first in might look, like they are in the game to make scoring easier and the gameplay faster. However, these Ominoes are essential in giving player multiple ways to score, even if there are less Ominoes of their colour on the board. Of course, even if you cannot help yourself to score, you can always help mess someone else’s arrangement, which is just as fun. 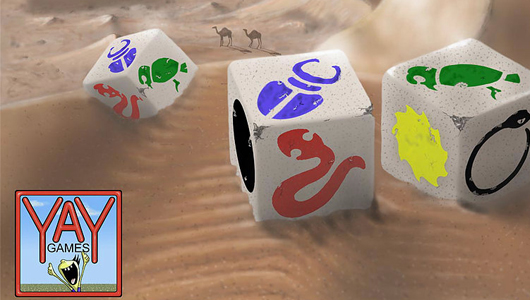 Ominoes has a very light theme of Egyptian gods. I refer to it as ‘light’ because the theme is not all essential to the gameplay. In fact, on most occasions the Ominoes were referred to by their colours, rather than their proper names. However, I think, the theme is a welcomed addition, providing the game with an extra layer of personality. I was lucky to play Ominoes for the first time in its development stage, without the theme. While Ominoes is still as good to play whether it is green, blue and red cubes or Horus, Khepri or Apep, I really like the special symbols on the Ominoes that represent each God and the general look of the game.

Easy to learn and fast to play
Every player is always involved in the game, even when it’s no their turn
Messing other players up is just as fun as scoring yourself
Four player game is slightly superior to three or two player game

Ominoes is an absolute delight to play. It is perfect for both new gamers and long time players. The longest game of Ominoes never lasts more than twenty minutes, and then, as if under a peanut curse, you are compelled to play just one more game… While it hasn’t broken any relationships (yet), you can truly test who is your best friend, by seeing who are the people that are always moving or re-rolling your Ominoes!