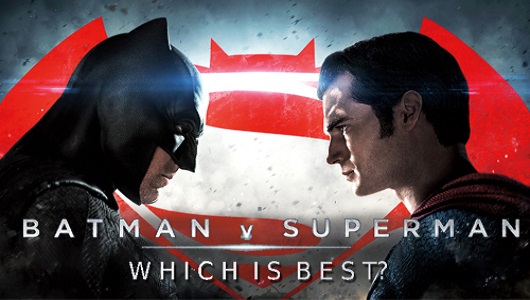 Batman V Superman: Which Is Best?

Warner Brothers are attempting to emulate the phenomenally successful Marvel Cinematic Universe and make a shared universe for their own movies. Despite somewhat lacklustre reviews, they are doing so by following up Zach Snyder’s Man Of Steel with Zach Snyder’s Batman V Superman: Dawn Of Justice. With substantial U.S. Box-office takings somewhat at odds with very mixed film reviews (you can read Diarmuid’s 3 Barrels out of 5 review here), whether or not this does manage to launch a series of Justice League movies remains to be seen. However, with Suicide Squad, Wonder Woman, Justice League: Part One, The Flash, Aquaman, Shazam, Justice League: Part Two, Cyborg and Green Lantern all planned, Warner Brothers are betting very heavily that this shared cinematic will come to fruition. None of which brings us any closer to the most important question raised by this most extraordinary of film titles: Batman or Superman: Which is best?

Many of you will have immediately jumped to the (right) answer: Batman. Obviously Batman is the answer, Gotham’s Dark Knight is definitively better than the Kryptonian Jesus cypher (His parent’s initials are J and M for goodness sake!) but the reasons why may not be as obvious.

“Batman is dark and gritty, Superman is a boyscout” I hear you say. This, my imaginary reader, is a popular opinion, popular but wrong. For almost my entire life and, I would be willing to bet, for most of yours Batman too has been a boyscout. The Batman of the 1966 TV series was, despite his costume, a whiter than white all American hero. Rather than the murderous vigilante of the late 1930s comics, Batman was a fully deputised member of the Gotham City Police Department who always followed due process and believed in the American justice system.

For those a little younger their Batman will be the Kevin Conroy voiced dark knight of Batman The Animated Series. While this incarnation of the Caped Crusader certainly carried around more angst, he still battled colourful villains with minimal force to ensure justice was done.

And yet, even at the height of his camp, in 1966’s Batman: The Movie Batman the boyscout is unquestionably better than the Superman of 2013’s Man Of Steel, as far as I can remember the darkest and grittiest Superman has ever been on page or screen.

If it is not his deeper character and relatable personality that makes Batman better than Superman, how can we objectively judge who is better (Spoiler alert: Batman is better)? 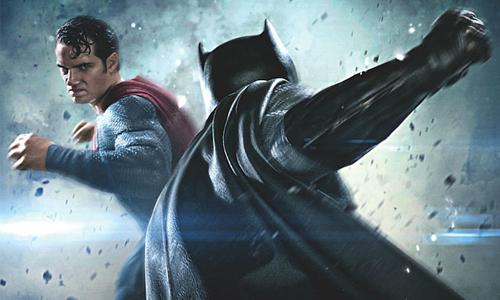 Round 1: Who would win in a fight?

This one goes to Superman. Superman routinely punches superpowerd individuals into space. Batman, whatever clever armour he might be wearing, would be an angst-ridden vengeance fuelled puddle if Superman ever really wanted him dead. 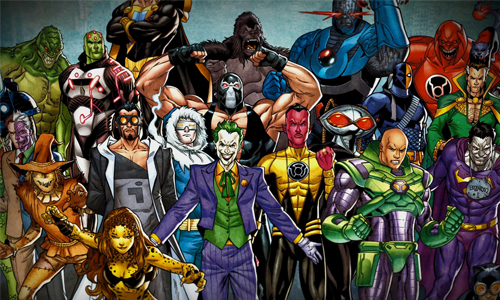 Batman’s rogues gallery is full of colourful characters that have passed into the public consciousness. The Ridler, Catwoman, Poison Ivy, The Penguin and the like are all Instantly recognisable, complex and rich in character with clear obvious motivations. For the Last Son Of Krypton however, things are a little sparser. Can you name any decent Superman villains? Go on, try to name 5. If you can, are any of them interesting in their own right?

But it is in their nemeses that we see the clear difference. A superhero’s nemesis should be a perfect reflection of their own character, their antithesis given form and malevolence such that the hero must overcome his very self to win through. Batman is, needless to say, the perfect example of this. Joker is chaos to Batman’s order with no apparent rhyme or reason for anything he does. The Joker is instantly iconic, terrifying and fascinating in equal measure.

Superman’s greatest foe? Lex Luther is a wealthy bald genius driven to greatness by sheer force of will. Is this Superman’s perfect reflection? If it is it only serves to tell you Superman is poor, hairy, thick and achieving greatness through genetic privilege. 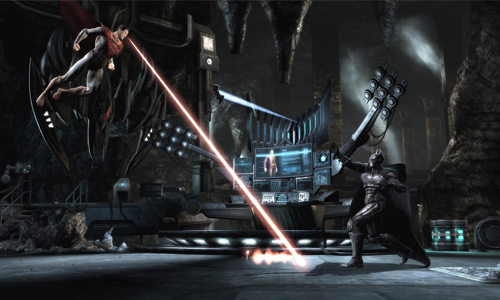 As the most bankable characters in the DC Comics stable, Superman and Batman have both featured in plenty of video games together: Injustice God’s Among Us, Mortal Combat vs DC Universe, Lego Batman 2, Lego Batman 3. Superman solo titles are much rarer, probably the only one you can name is Superman 64 and only because it is legendary for being bad.

Batman on the other hand? Since the late 1980s Batman has appeared in a constant stream of video game titles recently he has had the Lego Batman games (note it’s not Lego Superman featuring Batman…), Arkham Asylum, Arkham City, and despite the bugs, Arkham Knight. Each and every one of these I would wager is superior to the best that Superman games have to offer. 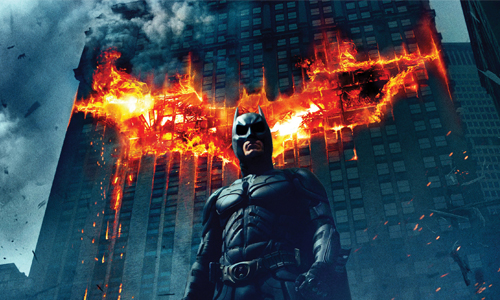 It seems unnecessary to list the excellent Batman films of recent times but if any Superman fan tells you that Kal-El has appeared in a film better than The Dark Knight then you will know they have completely lost the plot. 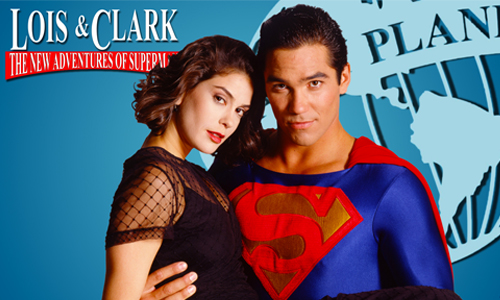 The small screen has never treated Superman that well. The New Adventures Of Superman was always fun, if silly, and the Lois and Clark dynamic was tolerable enough. Things were a little better for a teenage Clark in Smallville, if you could get past the “meteor rocks” finding a new use every week (including, if I recall correctly, tattoo ink that gave Smallville High’s football team super strength). I understand that Smallville picked up in the later seasons but by then I must confess I had lost interest.

Here, again, the Gotham’s caped crusader is a clear winner. While Bruce Wayne’s own teenage years in the form of Gotham have not been universally well received, this is surely outweighed by the might of the 1966 TV series Batman; full of onomatopoeic punches, dance sequences, high-camp villainous plots and what have become almost definitive interpretations of, what we have already established is, the best rogues gallery in comics. So brilliant was Batman that it has spawned Batman ’66 a comic title full of all the same ridiculous villains, onomatopoeic punches and Cesar Romero’s painted over moustache.

When turning to animation, the pro-kryptonian might point out that Superman The Animated Series ran for longer than Batman The Animated Series, and perhaps they might have a point except that the cultural impact of Batman The Animated Series (or BTAS as I shall have to refer to it as for the sake of my keyboard) far outstrips it’s Metropolis based counterpart. The most startling evidence for this comes in the form of Dr Harleen Quinzel, better know as fan (and cosplay) favourite Harley Quinn, who first appeared in BTAS but would later become a major character in the DC Comics universe in her own right.

This is all without mentioning Batman Beyond or Batman The Brave And The Bold which are both excellent in their own, very different, ways. 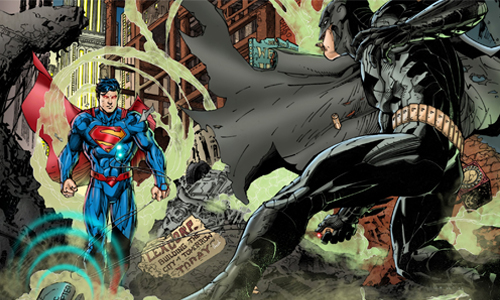 And so to the final, if perhaps the most important, category. Comics. Both caped heroes have been around for a very long time with Superman’s début in 1938’s Action Comics #1 beating Batman’s 1939 Detective Comics #27 by just over a year. Both have seen their share of retcons, crises (Final or otherwise), New 52s and convergences and both have been the star of questionable storylines (though I would argue The Death Of Superman is quite the silliest).

With histories as long as this, few could claim to have read all of either run and so I can only offer you my opinion on which hero has had the best comics based on those I have read.

The best Superman stories I have read are Alan Moore’s love-letter to the Golden Age of Superman Whatever Happened To The Man Of Tomorrow?, Mark Millar’s Elseworld story Red Son (which imagines Superman being launched a few hours later and thus growing up in Soviet Ukrane rather than small-town Kansas) and the fantastic Jeph Loeb and Tim Sale collaboration Superman For All Seasons.

These are all excellent comics but when compared to Batman origin tales Batman Year One and The Long Halloween, the gorgeous Hush or the controversial Killing Joke there can be only one winner. Perhaps I have not read the correct Superman books (if so, please do recommend some below or on the forum post) but I have yet to read any Superman story that comes close to these.

And there you have it. Quite incontrovertible evidence that Gotham’s Caped Crusader is better than the Last Son Of Krypton. Do you disagree? Can you think of a category that I should have included when judging between these two? If so, please comment below or on the forum and let me know.