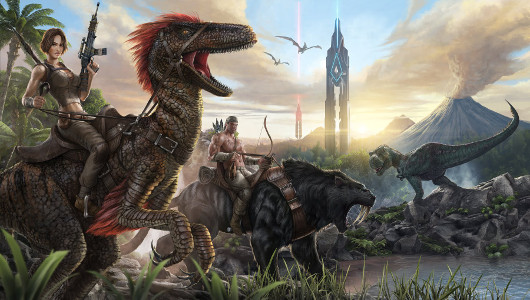 When ARK: Survival Evolved was first revealed in early 2015 it was immediately on my radar for one very simple reason – dinosaurs. It was the first survival game that would not only be built from the ground up for PC but also for the Xbox One and PlayStation 4 as well. With a persistent online world inhabited by other players and AI dinosaurs, there really wasn’t – and still isn’t – anything quite like it on consoles. However, my one concern about ARK: Survival Evolved was whether such an ambitious game could realistically work on consoles from a technological standpoint, even running on the new hardware of Microsoft and Sony’s platforms. After playing with ARK for a good month in Xbox Game Preview some of my concerns have been alleviated and some of them still stand.

ARK has been in early access on Steam since last summer and has been frequently updated with new content and fixes on an almost weekly basis. The Xbox Game Preview version of the game released just before Christmas and was on an equal footing with the PC release in terms of the available content.

The objective of the game – as you might have guessed from the title – is to survive. You play as a man or woman who has been washed up and stranded on a mysterious island filled with prehistoric creatures and – if you’re playing in an online server – 69 other players. The game can be played solo if you so wish, but you’d definitely be missing out on a great experience. 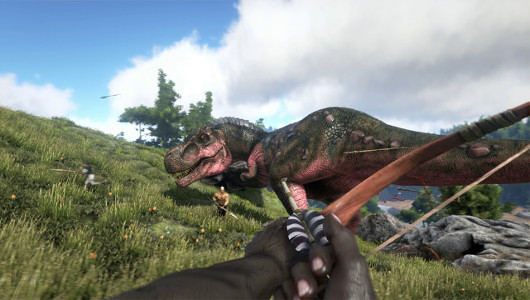 Surprisingly, the Tyrannosaurus isn’t the biggest threat you’ll encounter on the island.

Over the course of the game you’ll gain experience and level up which will earn you “engram points” which can be spent on hundreds of crafting recipes ranging from cloth clothes and spears for players just starting out to higher end items such as minigun turrets, assault rifles and saddles for larger creatures that can be built upon. You can also find “blueprints” in the world which give advanced crafting recipes that multiple people can share without having to spend points on the specific engram. Leveling up also lets you increase your attributes such as your health, melee damage, stamina, food, water, weight capacity and more.

ARK runs on dedicated servers on console – which come in either PvP or PvE varieties. There were a severe lack of servers at launch which made it almost impossible to get back onto the on you’d been playing on, however this has since been resolved with a mass of servers brought online. In PvP you’ll constantly be at the mercy of other players who can kill you, steal your stuff, destroy your buildings and murder your tamed creatures. My experience in PvP servers was a mixed bag, most players would be naturally aggressive towards you with only a handful willing to help you out or leave you to your own devices. After about a week of struggling to scrape together enough resources through being murdered and looted whilst I was absent from the server – your player character falls asleep when you’re not logged on – I elected to move to a PvE server with a couple of friends. PvP will definitely attract a certain player base but it won’t be for everyone. 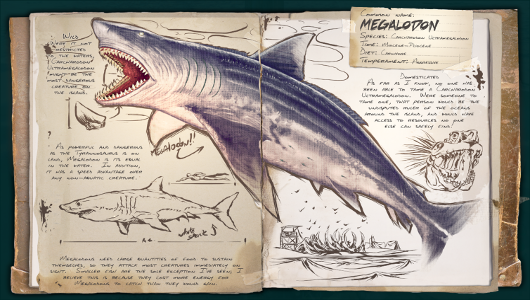 Every creature you tame will be stored in your dossier, giving you more information about them.

PvE servers are much more welcoming to players who simply want to play the game without being hindered by others – whilst also being able to interact and trade if you so desire. Being on a PvE server also made me do something I never thought I would. I changed my Xbox settings to allow me to hear other players. Not only did this allow me to see that ARK has a full blown text chat on consoles but also allowed me to forge alliances with players I’d never interacted with before. After setting up an initial base with my friends – and we established the mighty Dwarf Inc. tribe – considering we created all of our characters a short as they possibly could be – and we ventured out into the unknown to find a spot to call our own. In the process we tamed some dodos as pets and eventually worked our way up to taming a Parasaurus to use as a beginners mount and taming a Triceratops to use as a pack mule for carrying raw resources back to our base.

Soon after we made a scouting mission through a nearby swamp to try and locate a new spot for a larger and grander base of operations, coming across a myriad of shacks that had been built by other players and being hunted relentlessly by a Sarco (a giant crocodile) and a Titanoboa (a snake as long as a bus).

Eventually we settled in a rocky outcrop on the western coast and slowly but surely built up our base. We made a water enclosure and tamed some Megalodons and an Ichtyosaurus and slowly built up a collection of herbivores to use as mounts and berry collectors. When it came to the time to tame a flying mount I was greeted by another player who gifted me 40 pieces of meat out of his own good will. He proceeded to do the international crouching dance of friendship and ran off into the distance and I will never forget the generosity of Loki from the Dino Pirate tribe. It was at that point I knew this game was something special. It’s undeniable that ARK: Survival Evolved is a hell of a lot of fun when playing with friends and being able to interact with other players, but given that it’s in early access there are still a few hiccups here and there.

At the moment there isn’t any real endgame goal besides summoning the Broodmother at one of the giant obelisks on the island. Summoning the Broodmother requires collecting artifacts from the island’s caves along with other items from specific creatures. But other than that, once I’ve killed the Broodmother I almost feel like I’ll have ran out of things to do. Upon reaching higher levels things become almost trivial too. Acquiring resources becomes almost too easy to do as higher level creatures can effectively gather hundred – if not thousands – of a specific resource in seconds. Studio Wildcard have been great at announcing new content on an almost week by week basis and it gives us a glimpse of things to look forward to. Things such as ruins on the island and items such as explorer’s notes as well as more endgame content will certainly give players a reason to come back to ARK on a consistent basis.

The dung beetle is one of the next creatures to be introduced to ARK on Xbox.

However, the main concern I had with ARK before it launched and that I still have with it now is that I’m unsure if it can be truly optimized for consoles. As of writing this, ARK has some painful framerate issues, screen tearing, graphical issues and server lag. It’s not unplayable, it’s far from it, but it’s definitely something to be mindful of before dropping money on the Xbox Game Preview version. The developers have reiterated time and time again that optimization hasn’t even begun yet and will come closer to launch in summer and that the XGP version of ARK was only up and running about a month before it released. Given that Studio Wildcard have been so open with the community that has sprung up around ARK on Xbox I genuinely believe that the game will become much smoother over time. Many will complain about the performance, but people seem to fail to realise that the game isn’t finished. ARK is fun even in its current state, I enjoy it a lot. I don’t expect the finished product to be comparative to the PC release given the flexibility of the platform – that’s almost a given – but as long as ARK continues to be fun to play as it continues to be developed then that’s completely fine by me.

ARK is already something special on Xbox Game Preview given its massive success in terms of players logging in on a daily basis. The feedback that the community has been giving back to Studio Wildcard, and in turn their commitment to give back to the community instils a great deal of hope in me that development of the game will go smoothly. You should definitely keep an eye on ARK this year as there’s definitely nothing quite like it on console.