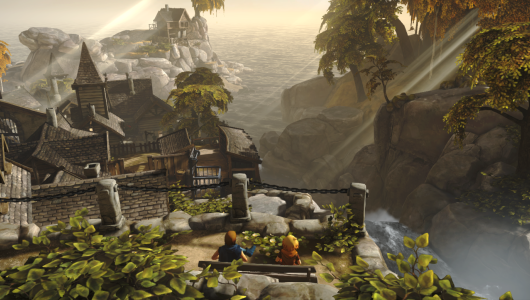 Brothers: A Tale of Two Sons passed me by when it was first released in 2013, and I’m so thankful that it has reappeared on the gaming horizon. If you’re also a fan of simple puzzle-solving among natural, beautiful backdrops then Brothers isn’t to be missed out on. There’s enough to this tale to set it apart from similar-sounding adventures.

The first thing that grabs the attention is the unusual control style. It is an incredible simple setup, with the left trigger and left thumbstick used to control the eldest brother, whilst the right hand controls the younger boy. Certain interactions can only be carried out by one of the pair – big brother can jump higher and move heavier objects, whilst little brother is better equipped to squeeze through small spaces and be lifted up. A lovely element that helps to humanize these character’s is the interactions they have with the world that marks them as individuals. The eldest boy might lean down to smell a flower, cutting a more mature figure than his younger brother, who would kick the same flowerpot. This personalisation is quite a feat for a game with no discernible communication, only a made up “language” of sounds called between characters. Interestingly, it does get to a point where certain words obtain meaning: “Naia!” is shouted by the little brother along with a wave when you hit the right bumper, making it clear that he is calling to his elder sibling. “Naiee” is the sound the elder brother makes in return. 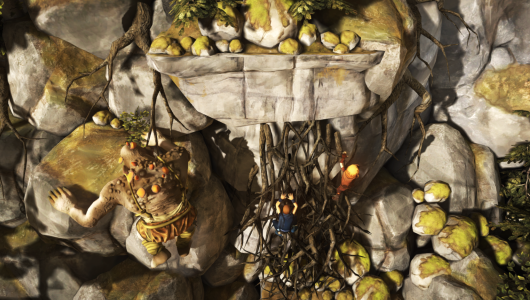 Controlling both characters with opposing triggers and bumpers sounds a little confusing at first but it works perfectly fine, as the helpful camera angle offers a tilted top-down view on the characters. It’s not hugely necessary to keep control of the camera apart from on occasions where you are required to clamber up rocks or interact with objects that are shielded from view. The camera’s auto-rotation and subtle movements as you play are more or less spot on, giving the player the all-important opportunity to absorb as much of the beautiful world the Brothers are exploring as possible. 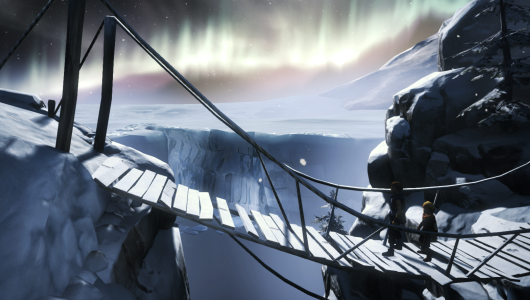 The soft, pastel tones of the first few chapters of the game present a quaint and natural world that holds small dwellings and cobbled streets. The art style looks absolutely gorgeous on new-generation consoles; there are stone benches located along paths that allow for a spot of rest and a chance to show off that beautiful scenery, be it forest, cliffs or ocean. There’s definitely an emphasis on the miniscule size of the two boys within the wild world they roam through compared to the creatures they come to discover. However, Brothers shows that meaningful events and the significance of one’s actions are great, no matter their physical scale. The boys see the struggles of fellow humans, ogres, wildlife and other creatures, and the lasting message is one of solidarity in a harsh world; there are times when life is simply cruel. 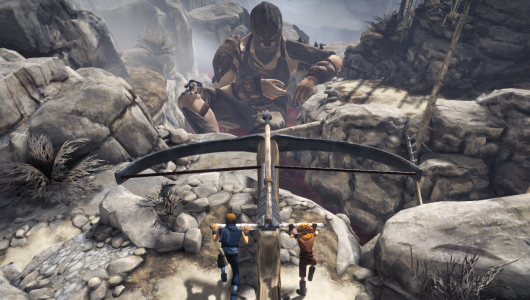 This gloominess is not predominant throughout the game, and Brothers is by no means a dirge to experience. The tone of their adventure is actually spot-on, offering a real lulling, relaxing experience which is helped greatly by the simplicity of the control scheme and the graphic style. Yes, the game has a sombre note to it from the start, when we discover the youngest brother has been experiencing flashbacks to his mother’s death. The intentions of the brother’s journey is to locate a medicinal cure for their father’s sickness in order to save their only living parent. Yet the story still manages to exude an air of hope, given the pleasant locale and amusing interactions you can carry out between the brothers and their environment. This is of marked importance, as the relationship between brothers – despite there being no understandable dialogue whatsoever! – feels hopeful, uplifting and real. They are two distinct, separate characters, yet both are absolutely integral to fulfilling their goal. Their relationship itself is a positive one, which is very importantly highlighted among the heavy goings-on of their journey. It becomes particularly meaningful as the deepening tone reaches levels of menace and unease. 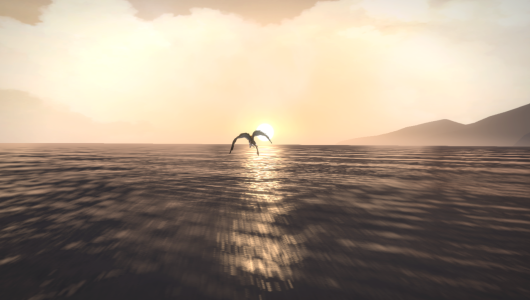 Brothers holds a painful and bleak tone that is carried throughout the game, yet importantly, does not override its enjoyable aspects. However, the ending may leave players at odds. The final chapters of the boys’ journey reaches an emotional conclusion, yet not one I would say is satisfying. It’s certainly not a scenario that ends on a positive note – that which is common with traditional narratives. No equilibrium is really restored; loss has a no less powerful presence than it had at the start of the game. But this is okay. In a way, it serves to strengthen those scenes of hope where the character’s continue on their path despite all the physical and emotional obstacles that toil them. Brothers is a beautiful, albeit bitter representation of life at its lowest – yet it also presents the inevitability of life carrying on.