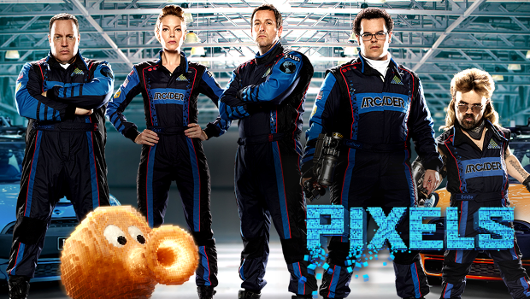 When you think about a movie showcasing the best retro games ever produced destroying the world with 8-bit graphics; your mind should also show a vision of Adam Sandler as the person to ruin a perfectly good concept with his usual puerile grace and wit. Pixels is the latest film to come from the Happy Madison Fraternity, based on the 2010 short film of the same name by Patrick Jean.  Sadly, Jean was only an executive producer on this movie and its story/screenplay credits go to long time Happy Madison collaborator Tim Herlihy (writer of 11 of Sandler’s previous works)

When you look at this movie on paper, even with the Bro-fist powerhouse Happy Madison at the Helm;  the overall plot of the film and the inclusion of Chris Columbus as director, it seems like this movie should work and become something entertaining but somewhere it has seriously lost its way. Over the past few years Adam Sandler has seemed to try and become more of a relatable every man, that is in comparison to his traditional crass persona portrayed in earlier titles.  Consequence of this is that most of the crudity and idiocy linked to his previous characters has now been transferred to his co-stars.

Sandler plays a normal guy – working as a technology store delivery/install/repair man, who just happens to be best friends with the President of the United States (played by Kevin James), feeling like his life peaked back in 1982 when he came second at the arcade world championships, he now has the opportunity to share his skills once more to save the world from aliens . James’ character seems to be purely there for set-up, with his only true function being to allow Sandler easy and supposedly plausible access to the US Military and its resources.  Other than that, he is a cheap joke trying to play on the idea that most of the US presidents are laughable figures of power:  it would have been more interesting to see the government figure out what happened and  find the people involved with the “1982 arcade world championships”.  This would have allowed a greater field for character development and allow us to maybe give a crap about these characters but as with most of the films released by this production company, reliance on ridiculous coincidence rather than actual story-telling and compelling plot is not really their forte. 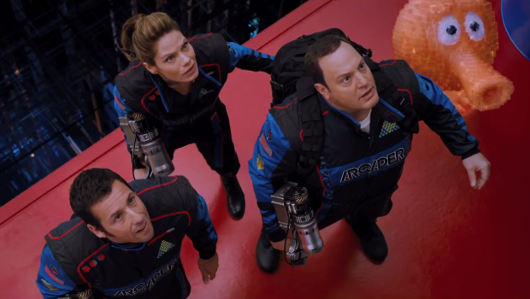 Most of the characters are pretty two dimensional, not fully fleshed out or realised. Peter Dinklage’s character is quite grotesque, there is no real reason for him other than to be a bastard and a sleaze,  he seems to have been bestowed with the bulk of the filth but there is no charm, jest or nuance to balance him out.  His limited screen time and apparent epiphany near the climax of the film does nothing to save this character.  As the anti-hero to this ensemble, this is a role that Dinklage could have worked with, if there was any actual depth to the script in the first place.

Michelle Monaghan’s character is the most acceptable character for the bulk of the film: at the start she is a whiny little dog with ovaries but does build into a somewhat interesting character, as a specialist weapons developer for the military she is a character that could have been used in a more effectively within this movie.  However, as the only female in this film who speaks and is shares screen time with the bulk of the cast for more than a minute (Jane Krakowski – First Lady has an extremely limited/pointless role) she ultimately has to take the bullet and become the romantic interest of Sandler, similar to almost every other lead female in an Adam Sandler movie.

Thinking about the script for a moment:  this film is rated PG and during the screening I attended there were many children under the age of twelve, possibly drawn in by the bright colours and promise of Pacman.  However, with lines such as “Slut-seeking missile”,  constant references to threesomes with various female celebrities and interspecies/pixel relationships,  you have to wonder if the screenwriter actually thought to himself that this is meant to be a “family-friendly” film.  If you want to introduce your child to the world of retro games, go for it: just do not take them to this film, even if it is a free ticket. 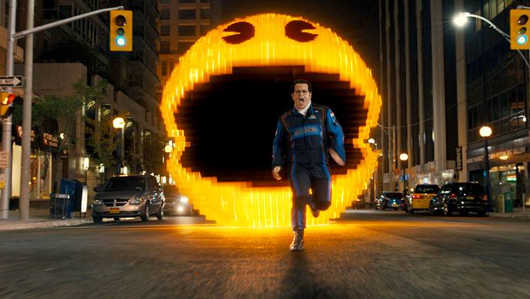 From a gaming point of view, the visuals do live up to the 8-bit nostalgia associated with old arcade cabinets but there was a number of inaccuracies if you follow the timeline of the movie.  This is set in a fictionalized version of our earth where Kevin James could become president of the USA (his character did remind me of a more pathetic George W.)  but they still should consider the era they were trying to portray a with a bit more accuracy.  While most of the games featured within the movie were available in arcades at the point the “1982 arcade world championships” took place, several had not been released at that point or even for several years after the time capsule had been launched.

Two of the major destructive forces from the final battle of the movie was Arkanoid and Tetris sprites who destroyed bridges and buildings;  the issue with this is that both games were released in 1986 and 1984 respectively and would not have been featured in the footage from the world championships.  If the aliens knew about these games and specifically how they functioned; surely they would have figured out that they were just amusements and not a declaration of war.  I understand that they were included as they are one of the most recognizable games from the 80’s plus watching them destroy Washington D.C. is visually stunning but when your premise hangs on the fact that these aliens have only experienced mankind is a time capsule from 1982, make sure you do your research.

They do include one “new” game created especially for the movie, Dojo Quest, (which you can download on your android or IOS device).  Sadly, the main reason for the inclusion of Dojo Quest is to give the movie licence to include a focus for Josh Gads character’s virgin lust who happens to be a scantily clad blonde ninja warrior who is also mute for the entire movie.  As you may expect, she is on the side of the aliens for all of five minutes before falling in love with Ludlow and defecting to the side of the humans, which is fine; but what happens after the aliens leave is the really messed up bit.  I shall not spoil it but it creates a lot of questions about the genetic make-up of these aliens and inter species breeding. Visual and 3D effects are impressive
Max Headroom makes an appearance (I thought that was cool)
At 105 minutes long, you’re not being as punished as you could be
Story is rushed and not fully fleshed out
Fails to meet the full potential shown in the original short
Most characters are just not likeable

I have given this movie one barrel but this is purely down to the special effects, visual style and soundtrack: the movie itself is a poor realisation of Patrick Jeans work which was a simply beautiful depiction of the destruction of the world via 8-bit characters.  When I first heard that Adam Sandler had bought the rights, I prayed he would not create his usual monstrosity but, alas, he has but with better graphics.  If you are still curious to see this film, wait until it is on your preferred streaming service so you can use your money elsewhere on more important things.