This is a tricky review, puzzling if you will. At times Broken Sword 5 excels as an excellent example of its genre, which judged on our review criteria, made me more than once near the beginning of the game consider giving this game the, highly praiseworthy 5/5 grading that we reserve for the absolute best of the best. However there were other elements of the game-play in particular that only served to highlight the absolute worst points of the point-and-click genre that made me glad it has all but disappeared. Who or what was the guilty party that murdered my enthusiasm? Read on, Monsieur and all will become, az zee saay, clear.

I should preface this by saying that I have never been a great fan of the point-and-click style adventure games. That said I have always heard that the Broken Sword series was held in high regard, felt that it was a series I had “missed out on” and tried generally to approach it as open-mindedly as possible. I wanted to like this game and I do, but I do not love it as much as I easily could have.
The general art-style and graphics are beautiful. I really like the artwork throughout the game. The background vistas look stunning and the character models are sharp while feeling lively and fun – maintaining the comic element of other parts of the game while managing to also maintain an air of realism. They are larger than life characters, often with overtly over the top French accents but they do not feel completely disconnected from reality. 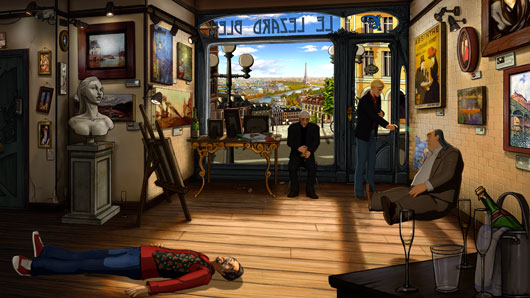 The humour in the script is also something that I really appreciated. The over-the-top French accent and the ridiculously incompetent French detective felt like a slight tongue-in-cheek faux pas more than a full-on politically incorrect mistake, but may not be to everyone’s taste. This along with a number of other moments kept me well entertained and literally laughing out loud at several points throughout the story. Some of the more serious elements of the Gnostic religious side of the story were very well written or researched, actually educational and highly fascinating – this kind of factual religious conspiracy theory is precisely one of the elements that appealed to me about the series and I was glad that it was something that they were able to maintain, even after distancing themselves from the Templar angle that, since the last game in the series was released, has become a little contrived in the post-Da Vinci Code era.
The in game puzzles were a real mixed bag. Some were so easy that it hard to describe them as puzzles, while others were so obtuse that it was difficult to see how you would ever arrive at their conclusion without outside assistance, extreme luck or more trial and error than is healthy for any one individual. Fortunately the game does have an in-built hints system; unfortunately it is not always as helpful as it thinks it is. Most of the time though it works quite well; five ever increasingly obvious clues give you hints culminating with the last “hint” that is basically just an instruction of exactly what to do. I did always try and solve the puzzles without using a hint, but once used it is often difficult to ignore the temptation of how easy this makes it to avoid the frustration of grinding to a halt. It cheapened a few of the puzzles for me, but not as many as it helped me not rage-quit or throw a controller/wobbly over. 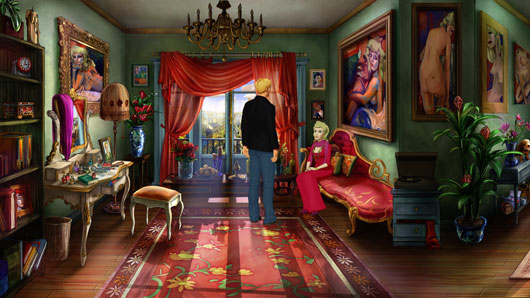 Some of the puzzles were great brain-teasing, head-scratching challenges of high quality. As a personal preference, I particularly enjoyed the code-breaking deciphering style puzzles. On the other end of the scale is what I refer to as “pixel hunting problems” and these were the moments of the highest frustration with the game that only served to underline one of my fundamental problems with the genre as a whole. Without giving away the solutions, my biggest frustration points were missing the presence of a crowbar and not being able to find a “recess”. On both occasions it was just a matter of me literally not being able to see the wood for the trees with these objects being virtually invisible against the backgrounds they were on. With the crowbar I was able to find it once the fifth hint had told me exactly where it was, the recess was a bit more tricky due to my overly literal translation of the word “above” – but to me there is a big difference between “above” and “upwards of this point and slightly to the side of.”
The above examples were small moments where I had an intense sense of frustration, clicking on anything and everything within the environment or looking to combine objects in my inventory in the vain hope that it would produce a different result to the last ten times I had tried doing the exact same thing – if psychotic videogame despots are to be believed, this is the very definition of insanity. However, these could have been fairly easily overcome or at least forgotten when relaxing back into the comfort of the humour and artwork of Broken Sword. 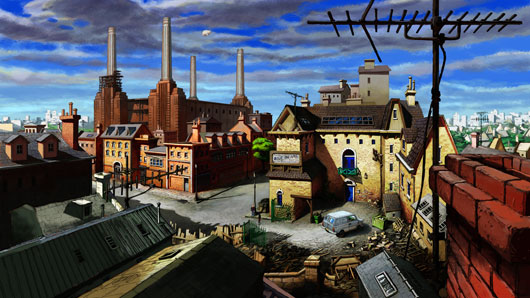 The element that I found completely ruined parts of the game for me was the point-and-click character movement and in particular the annoyingly lengthy uninterruptible animations that often went hand-in-hand with this. Accidentally clicking on something that you know to be wrong as soon as you click on it but being able to do nothing but watch you character slowly amble across the screen to say the line of dialogue you have already heard too many times is never fun. Again without wanting to ruin a puzzle for potential players, I will avoid giving full details, but the worse example came near the end of the game and involved a goat. You are basically plotting out a path for it to follow and from start to finish I would be surprised if the associated animation took less than twenty seconds to play out. While George’s in game character problems with the goat were amusing, mine were not.
Somehow I feel that both my pixel hunting problem and my issues with character movement are an extra annoyance on a console. I feel I could more easily tolerate this movement style if playing on PC or a tablet, but when I have two perfectly good character controlling thumbsticks just sitting there doing very little, it seems like a waste. The character movement would have been wholly more forgivable if it was interruptible though. I could not help but think (especially when given so much time to occupy myself) that there are games that have advanced this genre to such a degree that it is arguably hard to go backwards. In particular the recent, excellent Sherlock Holmes: Crimes and Punishment, but to a lesser degree games like Heavy Rain and the upcoming Until Dawn have all demonstrated that technology has all but surpassed the point-and-click genre to the point of making it virtually redundant.
It took me roughly twenty hours to play through the entire game, although this figure may be fudged by a few moments of setting the controller down to walk away and calm down a bit. While the general pacing of the game is not exactly frenetic, the problems I had with the game all seemed to leech my enjoyment by bringing the well-paced story telling grinding to a halt, so much so that I even considered how much more I would have enjoyed the game if it was not a game at all – although I concluded that this was a throwing the baby out with the bathwater style approach.
[youtube id=”6BsvdPkeDd0″ align=”center” maxwidth=”530″]
Beautiful looking backgrounds and character art
Great, well written and researched story
Humour is plentiful and well written
Odd character movement for a console game with lengthy uninterruptible animations
Pixel Hunting Problems with a few puzzles
Genre feels a bit stale and antiquated overall
Through the misty veil of nostalgia, Broken Sword 5, could much more easily be enjoyed and I think it would feel much less restrictive if played on another format, to the point where I actually advise against buying the console version in favour of picking it up elsewhere. I could not help marking this version down as I found it annoying and/or frustrating on too many occasion but the elements I liked were highly recommendable.
Even the explanation of the how the subtitle – The Serpent’s Curse – was derived is clever and not something I want to spoil, so as to not subtract from your possible enjoyment of the game. If you want to solve that mystery for yourself you will just have to follow the path of the story…but not in that direction…go here! Oh Gods damn it to hell! Will you…just…just come over here and…oh nevermind!
Review copy provided by Renaissance PR
Official Game Site