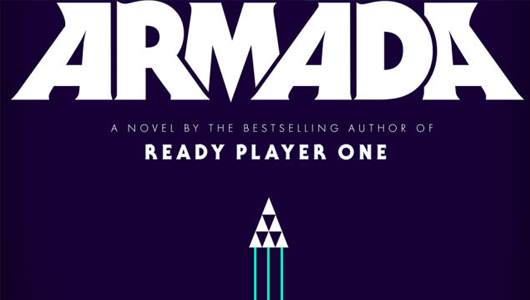 A few years back I stumbled upon Ready Player One by Ernest Cline. This was love at first sight. Even though approximately half of the 80’s references passed completely over my head, I fell in love with the characters and the virtual reality world of OASIS. Reading this book even made me feel nostalgic about all those near vomiting experiences I had with VR. However, most importantly the book spoke to my then still inner but getting progressively outter geek. After reading about Parzival, Aech and Art3mis geek out and study 80’s culture for days, I felt so much better about my own countless obsessions with fantasy and sci-fi books, video games and movies. On top of this, Ready Player One is filled with wonderful humour and if you happen to get it as an audiobook, then you get Wil Wheaton as a narrator and he does Parzival brilliantly!

So when I heard that Armada, Ernest Cline’s second book, was available, my mouse cursor hovered for about a second over the ‘buy’ button. A lot of what I have loved about the first book was also present in the second one. The world of gaming still played a prominent part in the story, and the geek culture references were splashed across every page. The characters were, of course, massive geeks, arguing about why one superhero is better than another, playing video games all night and quoting Star Wars left, right and centre. Yet they were not your stereotypical antisocial white dude clichés, but rather characters that while still having their insecurities, were also strong and confident in many ways. The humour was still there, although I found myself smiling, rather than laughing. Finally, great news for me – Wil Wheaton was still narrating the audio book!

However, after finishing the book quite a few things irked me…

Zach Lightman, Armada’s protagonist is a high school student raised by his mom after his father died in the exposition when Zach was very little. He spends all his free time playing Armada, a massively popular online space flight simulator, and Zach is pretty good at it, like “6th best player in the world” good at it. One day Zach glances out of his classroom window and spots something that makes him think he just might be going insane. He almost convinces himself that he had inherited his insanity from his father, whose private journals contain countless entries about video game UFO conspiracies. Afterwards… well, afterwards, a big plot twist happens. However, I would be really surprised if the majority of the readers have not figured it out by this point.

However, when the plot twist did happen my reaction was not the excited ‘called it!’, but rather slightly unsure ‘oh, you did it, didn’t you?..’ My main reprehension comes from how fast the book moves from ‘here is a geeky kid who is really good at the video game’ to ‘the survival of the whole world depends on him!’, especially since the events of the book happen pretty much within a couple of days. Both the timeline and the dramatic twist from video game world to Big Real World Stuff make it really hard for me to believe the events in the book. Before anyone points out the obvious to me, I am aware that the book and the events in it are fiction and will never happen in the real world. However, there should be some grounds in realism, otherwise how can I feel scared, sad, bad, excited for all those characters? How do I empathise and care for them, if I never believe that they could be real people?

The tone of the book might also have contributed to why I was not able to get completely on board with the events of the story. The tone is the same humorous, slightly exaggerated, yet very self aware voice that Cline used in Ready Player One. However, Armada tries to be a much darker book, especially towards the end. Again, this did not entirely work for me, and all the destruction and deaths left me indifferent (and wondering if I am horrible person…).

One of the outstanding examples of this was when the characters rush into battle to their deaths and use ‘may the force be with you!’ as their war cry. This was used unironically and not as a joke, but as a way to rally people who were preparing to die. Yes, it was used the same way in the movies, but that was an in-universe expression that, especially in the original trilogy, carried a very important meaning. In Armada, it is a pop-culture reference used as a rallying call… I can also understand the logic behind the authors choice as well. I mean, what else are a bunch of geeks heading to their death going to shout? They don’t know any military calls, ‘may the force be with you’ or ‘live long and prosper’ would be more appropriate. While I understand, listening to this scene has also made me quite literally face palm myself. I am not joking. 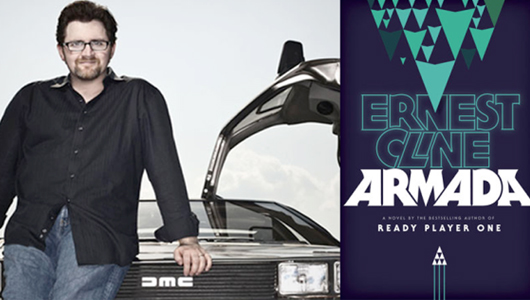 Another hiccup that dulled my enjoyment of the book was Zach Lightman himself. He is a bit of a douche. Somehow Wil Wheaton made him also more of an annoying douche. I have no gripes with Wil Wheaton’s narration – it was great and fun to listen to, maybe overly dramatic at times, but the voice he gave Zach made his character more dislikable for me. After finishing the book, I am still not entirely sure if Cline intended to make Zach a dislikable character. Cocky? Yes. Easy to anger? Sure. A teenager with father issues? Yes, that was part of the character development. But dislikable? I am not sure that any author would want their main character to be dislikable.

Speaking of character development, except for Zach and one other character, who shall not be named for spoilery reasons, there was not much. Even though the story takes on drastic turn, most of the characters seem to stay pretty much the same. Most disappointingly for me, the main love interest, chic geek goddess programmer has stayed exactly just like that – side character, pretty and perfect, the only girl that gets Zach’s most elaborate geek references. I will confess that after falling in love with Art3mis in the first book, I had very high expectations for Lex. However, either due to her limited ‘screen time’ or for some other reasons, Lex had stayed too perfect and very two-dimensional.

That is not to say that I have not enjoyed any characters at all. Pam, Zach’s mother, although not a major character in the book, was also probably one of the coolest mom’s I have ever read about. Her ‘You shall not pass!’ scene is an example of the occasion when I have given the geek reference a thumbs up. Also mystery spoilery character, who shall not be named in this review, was one character who made me empathise with their story, and made me feel things when the author really wanted me to feel things!

Book about games and geeks – yay!
Very distinguishable Ernest Cline voice throughout
Wil Wheaton narrates the audiobook
The plot is unbelievable even for a fiction novel
Main character is dislikable
Some geek references are face-palm worthy

Despite all of those ‘irks’ above, I have managed to enjoy the book. For the most part. I still love Ernest Cline’s voice that shapes the characters and the story. I love that he is one of the few authors out there who writes unapologetically about gaming and geek culture, maybe exaggerating it at times, but even in doing so, he is really laughing at himself. I like that his stories are easy and fun to read, and even when I can spot the plot holes from miles away, somehow that doesn’t detract from my enjoyment of the book. Unlike, Ready Player One, I will probably never re-read it, however it was overall a good read, or in my case – listen, although frustrating at points. However, some of my ‘irks’ are very subjective, so you might enjoy the book more!

The author paid for copy of this book
Official Site