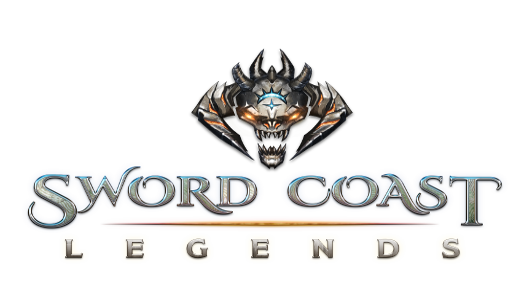 There have been lots of games based on the Dungeons and Dragons rule set and lore. Most of them were single player role-playing games. Sword Coast Legends sets out to change this formula and bring the video games closer to its papery predecessor. It does not only feature a full story campaign, playable in both single player and coop, all set in the Dungeons and Dragons universe. Its main draw is the dungeon master mode.

This mode was the focus of our presentation during gamescom. At first presenter Tim Schwalk, the Design Director of the game, showed how a quest module is made. The city, the quest started in, was completely blank, only houses stood in the empty streets. He went on to go into the smithy; there he placed a random NPC to be the new smith. When creating a new character, a random one will be generated. If you aren’t happy with the look, you can completely customize them to populate quests with the characters you imagined. With the click of a few buttons, the NPC was selling all kinds of adventuring goods. Then Schwalk moved to the upstairs, by default a bedroom, for the purposes of the quest it was restructured to be a study.

He started to delete furniture from the room and put new down. This worked just like in The Sims.  He put another NPC down, this time he customized him a bit. He also received some dialogue. Schwalk then enabled the NPC to further the quest. This, again, was done with just some mouse clicks. The next few minutes he showed of more of the dungeon master’s tools. The most important for the combats is the dungeon master die. It hovers over parts of dungeons where default encounters will take place. If the DM doesn’t like those, he can simply change them – either by making them have more enemies, less enemies or none what-so-ever. This hovering die is the focus of the combat balance. 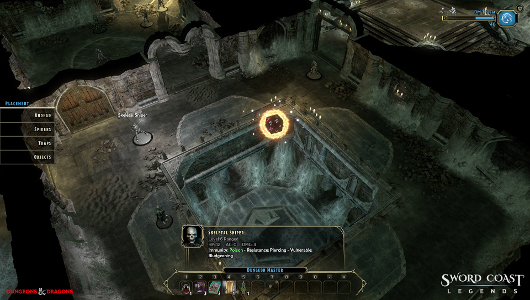 The real meat of the dungeon master tool are the dungeons. The DM can put down traps, make secret rooms and put as many enemies down as he wants. My highlight of the presentation was the creation of a mini-boss for the adventuring party. Schwalk wanted it to be an ogre, only wearing pants. After seeing you can change the colour of skin and attire, I suggested we make the Hulk. A few clicks later a new mini-boss was born: Hulk – the chef. We added the chef because a rolling pin is a weapon in the game and everybody thought it was funny. Then Schwalk showed off the Beholder, an iconic Dungeons and Dragons enemy, for the first time in public.

After this presentation it was time for the journalists to play the game. We played through the dungeon that got changed before our eyes moments earlier, so we had some idea what we were facing. When the party moved through the dungeon, our dungeon master Schwalk could still make it harder for us. The game played like lots of isometric roleplaying games before it. You click and drag your mouse to move the characters, to use our abilities you press the number keys. In order to pick locks or find traps, you have to succeed in a skill check, just like in the Dungeons and Dragon role-playing game. The game rules for Sword Coast Legends are modelled after the most recent edition of DnD. When we faced off against the Beholder, Schwalk did not make the fight easy. He dropped more and more minions into the fight. At one point he brought back Hulk – the chef, but on our side. In the end only our warrior stood and walked out of the dungeon. 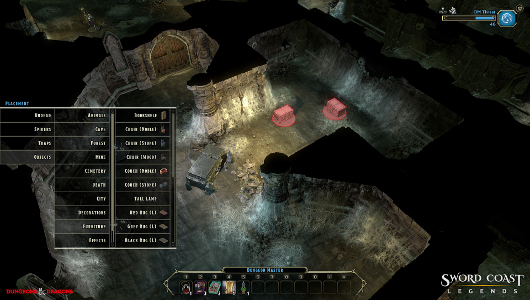 When you’re playing with random people online, the dungeon master mode will probably be a bit frustrating. Loot is generated for the whole party, not for each individual player like in Diablo 3. Because the DM is so insanely powerful, he can break the balance of the whole game. He can also turn an inherently gritty and grounded universe into a weird joke-y one. How about making a dungeon covered in rugs and ridiculous weak boss monsters. I have high hopes for this game to bring tabletop roleplaying games to a wider audience.