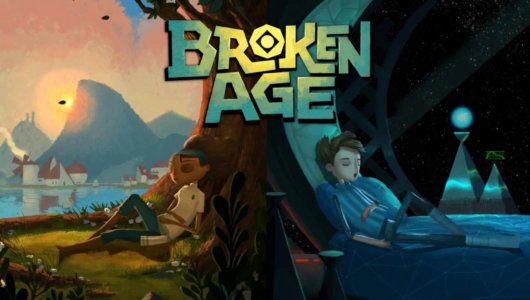 I really like Tim Schafer. He’s a video game legend. His whole career has been jammed packed with games starting way back in the early 90s with the hilarious Monkey Island series. He defined the glory days of the Point and Click genre writing other classics such as Day of the Tentacle and Grim Fandango. Since leaving LucasArts at the end of the 1990s his new venture, Double Fine has continued to produce some stellar games. Psychonauts is a cult classic, Brutal Legend is great fun and Stacking is a fantastic, massively underrated puzzle game. It seems that everything Schafer touches is amazingly well written and frankly, hilarious. That brings us on to Broken Age, one of the newest games from Double Fine. Originally crowd funded on Kickstarter back in 2012 simply titled Double Fine Adventure, the brief was simple. Let’s take Schafer back to his roots and have him create an old fashioned point and click adventure game. Surely it’s a no brainer? Well is Broken Age any good?

Broken Age just sort of….exists. It’s completely inoffensive but also completely unmemorable. It’s not bad but it’s also just not very good. It’s a point and click game, yes, in the vein of the early 90’s LucasArts games but surprisingly it’s just not very funny. Sure it got the occasional giggle out of me but for most of my time with Broken Age I was just going through the motions, picking up items and solving the odd (not very difficult) puzzle.

Before I get too mean I should probably explain what Broken Age is actually about. The game contains two, wildly different stories that run in parallel, involving two primary characters: Shay and Vella. At the game’s opening their stories couldn’t really be any further apart. Shay Volta is a teenage boy living alone on a spaceship, the Bossa Nostra. The ships AI, masquerading as his mother and father provide entertainment and distractions for Shay in the form of exciting space adventures. The problem is all of the adventures were intended for a very small child, and now almost grown up, Shay can see that everything he does on the ship is completely pointless. Mostly, he’s just very very bored. 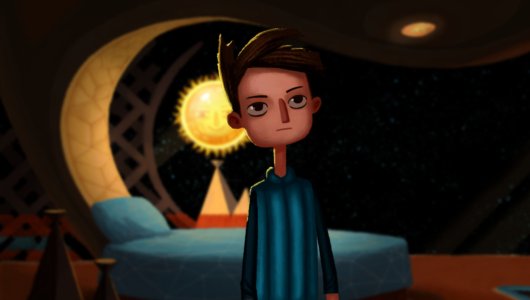 Meanwhile Vella, a citizen of the town of Sugar Bunting, has been selected for this year’s Maidens Feast. Her town, and all the others nearby are repeatedly attacked by huge beasts known as Mogs. Rather than fight the things each town selects a handful of young girls to be offered to the Mogs as a sacrifice – in exchange for the beast leaving the rest of town intact. Whereas most of the townsfolk see the selection as maiden as a great honour Vella isn’t particularly keen on being eaten by the colossal Mog Chothra. Instead she breaks out and explores the neighbouring areas, in search of a way to defeat the Mog before it destroys her town. 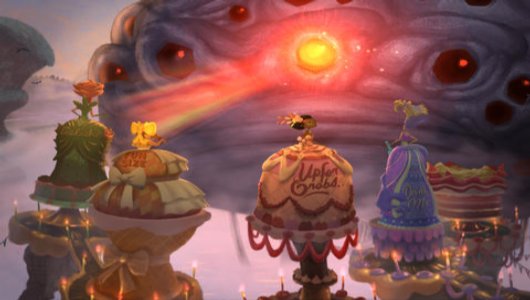 One of Broken Age’s main features is the ability to jump between these two stories whenever you want. You can literally play five minutes of Shay’s story, before jumping over the see what Vella is up to for a minute, and then jump back to Shay. It’s an interesting idea but largely….pointless. For a good chunk of the game the stories are so far removed from each other that jumping constantly is just disorientating. The game does include a few elements that encourage you to jump but personally I found these parts intentionally dull, which is a rather lazy game design choice. The early parts of Shay’s story aboard then Bossa Nostra involves Shay being bored with the repetitious tasks set by his “mother”, the ships AI. This section involves repeating the same childish missions again and again. It’s boring for Shay but unfortunately it’s really quite boring for the player too. It does prompt you to jump over to Vella’s story but, as I said, it’s a rather lazy way to encourage this. Personally I found Shay’s story significantly worse than Vella’s. Vella’s story contains the better puzzles whereas Shay’s consists mostly of dull puzzles and very annoying minigames. 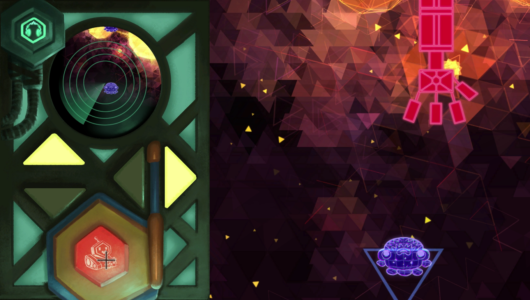 Broken Age was released as two distinct acts, the first early last year and the second act just a few months ago. The second act is a fair bit better than the first with, unsurprisingly, Shay and Vella’s stories coming closer together. The puzzles get a bit harder although a few were perhaps a bit too annoying. Yet this late in the game it almost felt too little too late. The plot gets a bit better yes. It doesn’t get any funnier though and it didn’t really improve my opinion of the game overall. It’s not all doom and gloom of course. It’s a very pretty game and, despite not being funny per se, it’s well written and also very well voice acted. That’s hardly surprisingly when you realise that Shay is played by none other than Elijah Wood.

I think my main problem with Broken Age is that the whole premise of its development is a bit lost. The Kickstarter aimed to give a new lease of life to the adventure game genre. To create a new golden age of point and click games. The thing is….that already happened a few years ago in 2012 when Telltale released the first season of The Walking Dead. Personally I think we’re already in a new golden age of adventure games. Telltale have taken three existing intellectual properties, IPs, which could have been used to create cheap and quick cash-ins and instead created some fantastic games. No matter how story intensive you want your game to be, most games still have to separate the exposition with something….usually killing countless bad guys. The modern adventure game allows developers to create games that are all about the story. Sure you kill the occasional zombie in The Walking Dead or chop someone’s head off in Game of Thrones but the format allows gamers to focus on the story instead of just the killing. To me that is what adventure games are today. 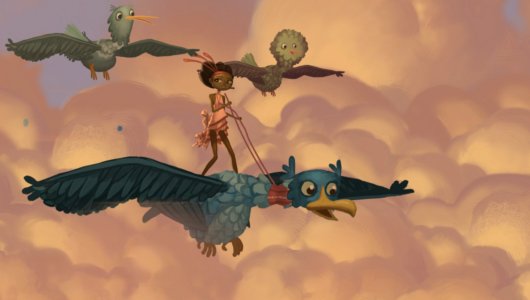 “But what about funny, old fashioned comedy Point and Click games” I hear you say? Of course there is a place for those sort of games. The thing is….Broken Age just really isn’t that funny. It barely made me even giggle. There was the odd humorous joke including a bit about a woodsman who had an obsession with creating stools was quite funny but mostly the story and the jokes just washed over me. I expected so much better from Double Fine and especially from Tim Schafer.

The game is very pretty to look at
The voice acting is particularly good
The story is uninspiring and the puzzles never really felt very….fun
The switching character mechanics seems arbitrary and at times it felt like the game was being purposefully boring to make me switch
It just isn’t anywhere near funny enough

Perhaps my score is harsh but at the end of the day I really cannot recommend Broken Age. A lot of my criticisms are very subjective. I didn’t find the game that funny or the plot that interesting but perhaps you will. With adventure games, where the gameplay often plays second fiddle to the plot then your opinion on the story is far more important than say, a first person shooter. The thing is though I love adventure games and there are just so many more out there that I would recommend over Broken Age. I’ve already discussed the fantastic games Telltale have been churning out but if you want something funny or light-hearted then literally anything else by Tim Schafer is more worth your time. Day of the Tentacle, Grim Fandango, The Secret of Monkey Island, all of these games are far more fun, and so much funnier! It does feel weird to hinge my review so much on how much I laughed whilst playing a game but with a Tim Schafer game then, it’s definitely a fair criticism.