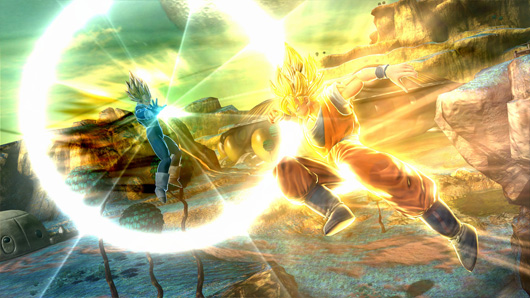 Let us start at the end – the end of the title that is. The “+” refers to this being an enhanced version of the game that was released in Japan back in March. This enhanced version is the first for the current crop of consoles, is the first in the long running series to be released outside of Japan and has some balance changes made based on the feedback from Japanese players. It also includes a new “arcade “mode added just for Western audiences – which is a bit ironic given that Japan may be the last surviving refuse of the gaming arcade.

J-Stars Victory VS+ had a public playable demo for the first time at MCM London last weekend, but I also had a few hours of hands on time at Bandai Namco’s UK HQ last week.

J-Stars Victory VS (with or without the “+”) is a two-on-two arena fighting game based on a combination of Manga (Japanese comic) properties. It features a number of fighters from some very popular Manga series that either have or do feature in a collection of Manga referred to as Weekly Shōnen Jump (or “Jump Magazine“) This phonebook size collection reminds me of a Japanese equivalent of a Beano annual or graphic novel – only these come out every week, are much bigger and on lesser quality paper. In fact, despite the spine being the “wrong” way round, it looks very much like a white copy of the Yellow Pages, with all the comic strips printed in greyscale. The magazine is celebrating its 45th anniversary this year and this game is also helping to celebrate this occasion. 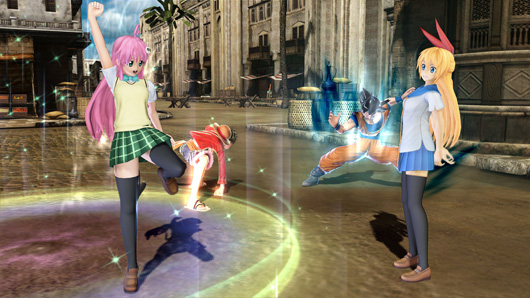 The game’s combat takes place in a 3D environment, usually filled with buildings, but oddly enough Japanese style architecture seemed to be the exception rather than the rule, at least in the levels I played.  That is when the level is not filled with odder surroundings– such as giant sized vegetables. When there are buildings in the environment, most, if not all, of the buildings and structures are entirely destructible. This gives a satisfying weight and gravitas to proceedings when it works well, but can also distract on occasions when it feels a bit too fragile and flimsy. However, this mostly aids the frenetic style of gameplay that sees you face off against another team of three combatants.

You have two primary characters that can be switched between on the fly and another support character that can be called in to deliver a special move. Every time a character is knocked unconscious, the attacker gains a point and the winner of a round is declared when the first team gets to three points. This is a nice way of ensuring that everyone involved can carry on fighting until the end, rather than being knocked out early and having to sit and wait – a welcome addition to the genre given the game has multiplayer support. It also means that you can switch targets, either mid-fight or after one of you have been downed. It also means that you and you co-op buddy can double team a hapless foe! 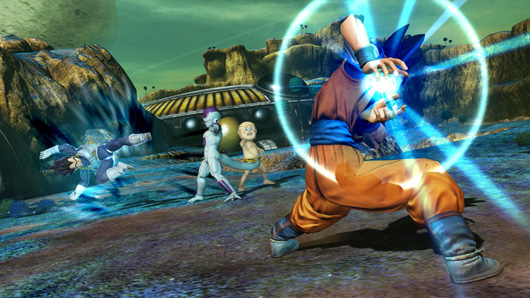 The “J-Adventure” mode that makes up the game’s main story/quest mode sees you travelling around the map of “Jump World” in a pirate ship, which eventually takes to the air. You start the story from one of four different perspectives and must build a team to take part in the upcoming “J Battle Festival”. Characters join your airship road-trip or fight against you, as you move your airship around travelling to the different locations on the map.

No matter which one of the story versions you pick, you soon find yourself encountering other teams of three fighters from many Manga or Anime you may know or love, with over 25 different universes to choose from. Naruto, One Piece, Bleach and Dragonball Z are probably the most well known outside of Japan, but I was happy to see the inclusion of Kenshiro from Fist of the North Star and having recently reviewed JoJo’s Bizarre Adventure, it was nice to see a few familiar members of the Joestar family. I had not encountered the excellently named Bobobo-bo Bo-bobo before. There are a total of 52 characters, 13 of those are not playable but add variety to the support characters. 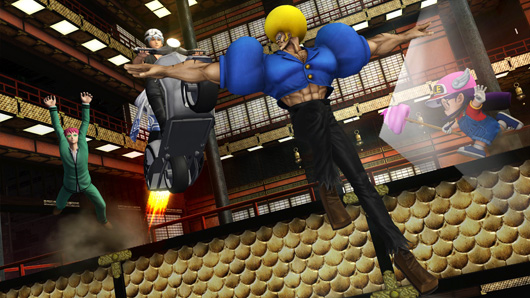 The overall game is voiced entirely in Japanese with subtitles, but this just appears to aid the charm and authentic Japanese feel to the game. The newly added Arcade mode seems like something a western audience would expect to be in a fighting game, but may also help you get more familiar with characters that you are not able to use until later in the “J-Adventure” mode. The Victory Road mode tasks you with completing certain tasks during your bouts and there is a free-battle multiplayer mode for two players via split-screen or up to four players online.

Out near the end of June you can help celebrate the 45th anniversary of Weekly Shōnen Jump by beating up all your favourite Manga characters, some of their friends and a few of your friends too.