My current game of the year so far is a gun-heavy, multiplayer, space marine shooter with a tough-as-nails difficulty and one of the most basic mission structures I have ever seen. Saying this feels odd to me based on my preference for story-driven, single-player games with unique and memorable characters where the emphasis is put on rewarding exploration and experimentation rather than punishing mistakes. Arrowhead’s Helldivers is making me rethink everything I thought I knew about myself – maybe I really would like reality TV if I gave it a chance.

Set in a familiar dystopian future, Super Earth is our home and it is under attack. The Helldivers are our best hope against the onslaught of three invading enemy species. You are the latest recruit in the war effort and are tasked with driving the enemies of the state back to their respective homeworlds. Similar to the fantastic Starship Troopers, Helldivers has its tongue firmly wedged in its cheek here, with propaganda messages and patriotic overtones throughout.

Beginning on the bridge of your ship, you have a few options: 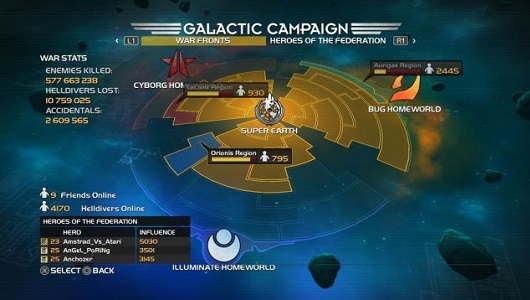 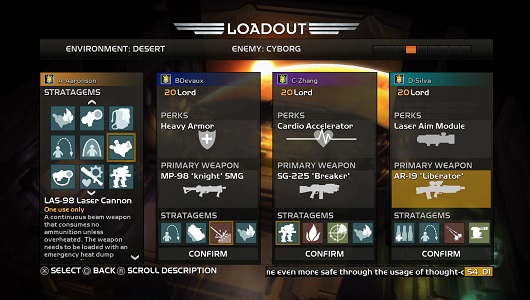 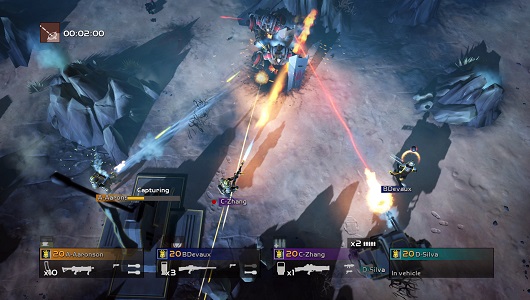 In terms of game-play, Helldivers is a basic twin-stick, isometric shooter. The complexity is added when you get to completing tasks during your missions. The various missions include holding off waves of enemies to secure a location, activate turret defences and escort scientists to safety, for instance. Each task will test your ability to absorb pressure as activating terminals requires more than a simple button press and friendly-fire is always on. When you have a screen with four Helldivers on mission, with both enemy and friendly NPCs walking around, the room you have to manoeuvre and fight back is greatly reduced – that is when the sweating will start! 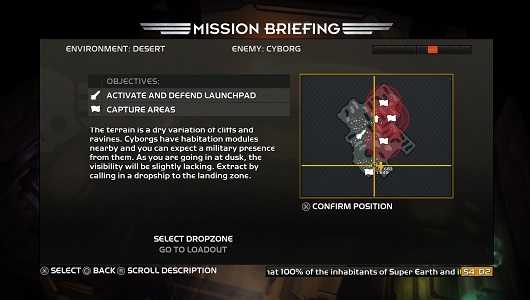 From the beginning, it is clear that Helldivers is designed to be a multiplayer experience. Single-player is possible, but less fun and chaotic. The game is running on all cylinders when you have four compatriots fighting for survival, with everyone working together. As the tasks are all straight-forward (in planning at least; not so much execution), every Helldiver will know their role and what is expected of them – which makes it all the more stressful and, quite frankly, hilarious, when the feces hits the rotating air-displacer and all hell breaks loose.

The various startagems also add some strategy to proceedings – shocking, I know. For instance, if a fellow Helldiver decides to bring a turret, mech or APC, it behoves you to choose the repair tool to help out your colleague. If the planet you are visiting is covering in snow or swamp-land, the jet pack will allow you to move around more easily as the terrain slows you down considerably on foot. Of course, calling in any of these items requires activation time, a safe area to land (as these drops can kill other Helldivers if misplaced) and cool down time – so a level-head and quick-thinking is also necessary. 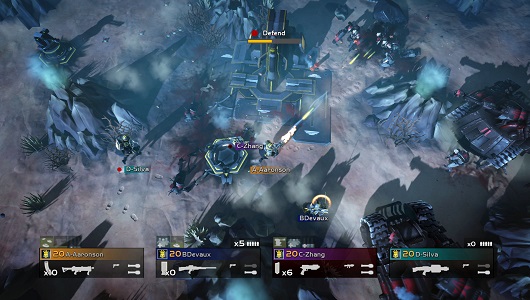 Graphically, the game is impressive too. While the production values themselves are not overly ambitious, the amount of detail on-screen is perfectly balanced. The game looks and sounds good but equally, you never lose sight of where you are, where your fellow soldiers are and where the enemies are. These are vitally important considerations as the last thing you want in a game this challenging is for the reason for your demise to be the game’s fault. That would lead to frustration and kill the mood.

Helldivers is well-worth picking up. It is an addictive co-operative multiplayer experience (with couch co-op available too) where even playing with randoms is not frustrating as there is no reward for trolls.

Join the fight for Super Earth today. Sign up to become a Helldiver. Would you like to know more? 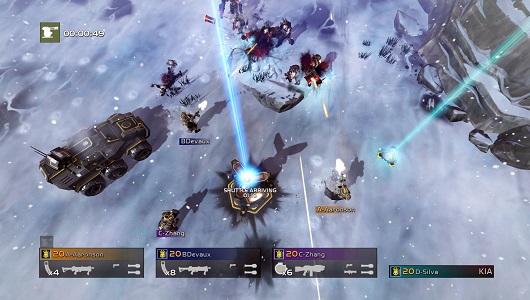