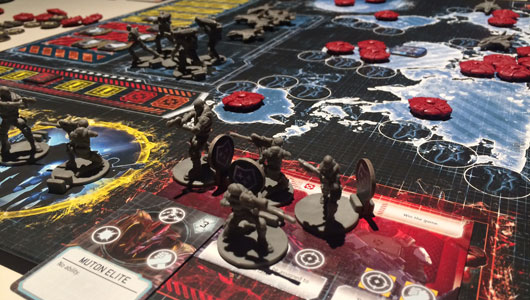 Preview: XCOM: The Board Game

TIM (FAN OF THE VIDEO GAME): Last night we got the chance to get an early hands-on with XCOM: The Board Game. I never played the older games, but I am a massive fan of the recent XCOM video games Enemy Unknown and Enemy Within. A turn-based strategy game based on an alien invasion was always going to be an attractive proposition for me. Rarely have I looked forward to a board game’s release as much as I have with this, but then at the last minute my excitement was tempered by some deep rooted concerns.

The Board Game of XCOM comes with a companion app – nothing too unusual there given this being an ever growing trend – but I have not seen a board game where the app is such an integral part, that the game cannot be played without it. Having downloaded the app and thumbed through it prior to the event this gave rise to my first concern that the board game may feel like a watered down or neutered version of the video game that had lost some of the most interesting and defining parts. 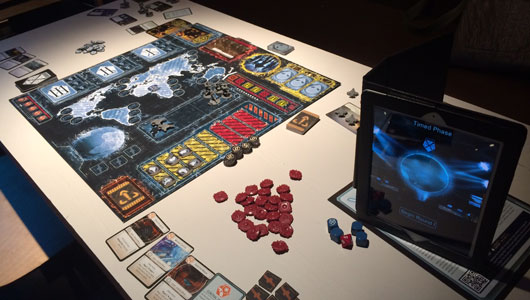 My other concern arose from the style of game-play the board game was aiming for, as I had hoped for something more akin to the turn-based combat seen in the video games – perhaps something more along the lines of the recently released Star Wars: Imperial Assault. My hopes for a modular board and a campaign of missions against hordes of alien enemies were dashed. However, it did not take too long for both of these concerns to be diminished and, by the end of the evening I had been won over to this being the better approach.

The board game does not attempt to fully replicate the game-play style of the video games, but does an excellent job of capturing the ethos and essence of the XCOM universe – especially the sense of panic and relief. As with the video games it is very easy to feel overwhelmed by everything the game throws at you at once. Various events occur on the app such as Crises which can hit at any time during the timed phase of the game and are then dealt with in the Resolution phase. The app bleeps into life informing you that you need to choose between one of the two crisis cards to resolve – meaning you may have to choose between the likes of an increase to panic levels in all continents or lose another precious few interceptors guarding the skies against UFO attacks. While the video games just throw a crisis at you, at least with the board game you get a choice. In some of the areas such as mission selection, the board game give you slightly less of a choice with only two missions to choose from. 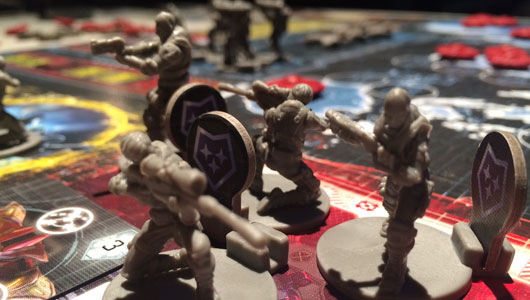 Gameplay continues in a cooperative fashion with up to four players being assigned different roles. The game is lost if either the player’s base is destroyed or two continents go over the limit on the panic track. The game is won if the players manage to complete a series of mission culminating in a final mission whose details are found on the back of the invasion plan card selected at the beginning of the game.

The board game accommodates up to four players playing separate roles each tasked with overseeing different elements of the XCOM universe. I was assigned to be the Chief Scientist and so was in charge of research. The Squad leader is in charge of troop deployment, the Commander is in charge of assigning interceptors and the overall budget and the Central Officer takes control of the satellites and keeps the game moving along by relaying information from the App. 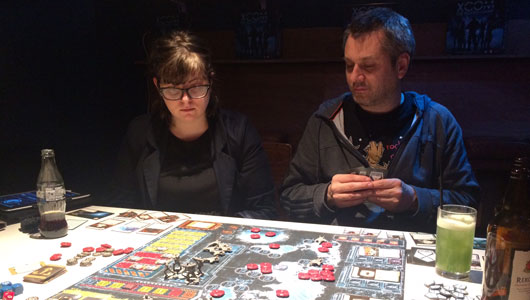 The satellites are a good example of an element of the video game that appears in the board game, but function in a slightly different way. While an early warning system and a way of being alerted to missions in the video game, during the board game they are a way of destroying UFO’s in orbit – whereas the interceptors battle the UFO’s directly over continents. All actions that the players perform; from research, combat and shooting down UFOs, have an interesting mechanic where you roll two types of dice at once.  The blue die dictates your success or failure and the red dice dictates your fatigue level. The threat level increases, from 1 to 5, every time you roll the dice in an attempt to complete a task and the result on the red die must be greater than this number for you to continue. You may still complete you task but it could come at the expense of tired scientists, burnt out satellites and dead soldiers. I really liked this mechanic and thought it worked well with the context of the game.

There are some major factors of the game that have been lost in translation. The biggest loss for me was that all the soldiers were just blank grey avatars, devoid of the emotional investment and the cry of anguish seen from losing one of your soldiers who had been with you since the beginning and happened to be named after your dog, wife or best friend.

My initial fears had not only subsided by the end of our game, but been replaced by an appreciation for the app that I had not thought about going in – it is a great tool for guiding new players through the game for the first time. While factors such as time constraints would be awkward to manage/police without the app, the ability to go through the tutorial at a much more relaxed pace was welcome and well implemented. While I may have a newfound concern that the individual player roles may not be unilaterally interesting, at the very least this gives the scope for enhanced replayability, as does the end of game scoring system. I cannot wait for another chance to take command and defend the Earth the next time aliens come invading. 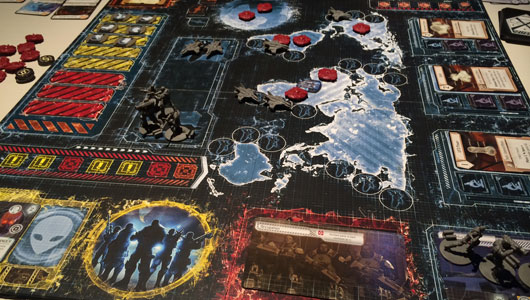 ALEX’s OPINION (HAVING NOT PLAYED THE VIDEO GAME): It seemed that everyone else sitting down to play XCOM: The Board Game did so with a fond nostalgia or passion for the video game coupled with an understanding of its universe. I dived in blindly. It seemed an overwhelming experience at first: so many places on the map, different tokens, cards, interceptors, soldiers, dice and the mysterious app that was supposed to make all those pieces work together. However, once I have assumed my role as a Squad Leader and was told of my duties, it all clicked into place. I was part of the team that had to work together on a strict budget and limited in the most precious resource of all, time, to complete a series of critical tasks to save the world from the alien invasion.

Cooperative games tend to have one flaw in common: players often spend ages discussing how to attempt to solve a problem, stretching the game to the point it became boring and monotonous. In XCOM: The Board Game time was cleverly integrated in the game through the app. We would have mere seconds to choose missions, assign research and deploy interceptors and troops. The Panic level of the game was also coordinated from within the app. This meant that the more panicked the population of the Earth was, the less time we had to perform tasks. Actual real world panic began to infect the gaming table. With our Central Officer shouting that I had five seconds left, it was a bit too easy to confuse the Assault soldier class with Support class, and send the wrong soldier to the mission… As the game was governed by the app AI, every decision we made had that much more weight to it, not only in terms of time, but also resources — there was never enough money — and the order in which we could do our actions. This created an intense style of play but if the objectives got completed, there was an amazing feeling of achieving something that was almost miraculous.

I have enjoyed my first play through XCOM: The Board Game and I definitely want to spend more hours with it. It would be interesting to see how different roles work and how much variation the app brings. Also having played the board game, I am starting to think that maybe I should go and get that video version of it that everyone is raving about…