The entire premise behind Teenage Mutant Ninja Turtles has always been ridiculous. Its initial inception started out as a bit of fun between two friends, Peter Laird and Kevin Eastman, riffing on some of the more popular comic books of the day, like Daredevil and Cerebus. Since then, it has had multiple incarnations on the big and small screen (with varying degrees of success and acclaim), as well as numerous forms of merchandise. I can still remember playing with my cousin’s Turtle Van.

The inevitable reboot of the franchise has just reached our shores – and with Michael Bay’s involvement and the director of Battle: Los Angeles at the helm, how bad could it be?

In the beginning, the ridiculous nature of the TMNT brand attracted me to it. The story revolves around four sibling turtles that become bigger and more intelligent due to a man-made mutagen. Taught martial arts by their sensei, an equally mutated rat named Splinter, they become the hidden guardians of the city of New York. In the comics and cartoons, their adventures involved time-travel, dimension-swapping and alien attacks.

So it is disappointing that the movie seems to forgo this core silliness to try to make a more grounded film. Being honest, I probably should have assumed that this would be the case when I saw the designs for the mutated brothers. The turtles just look far too busy – reminiscent of Michael Bay’s other blockbuster 80’s franchise. 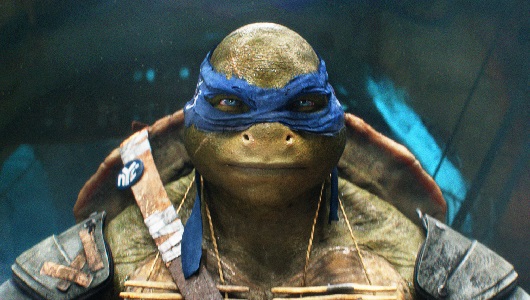 Liebesman, the newest member of Team Bay, has focussed on the wrong member(s) of the cast. People are paying to see the four augmented terrapins kick ass, not the story of an aspiring journalist with no sense of threat or danger. Megan Fox plays April O’Neil as a driven young reporter, but her role is so underwritten that you never really get a sense of who she is and what is actually driving her in the first place.

A convoluted and muddy history between her and the turtles has been created. While I am not overly precious when it comes to our heroes’ backstory, they really have made a bit of a mess of it here. Some may consider the next point to be a bit of a spoiler so those who want to go in clean should avoid the rest of this paragraph. One of my biggest bugbears lies in the fact that Splinter is not a former human who becomes a rat through mutation but starts out as a normal rat himself. This is not a big issue in itself, but the original version explained that he was a martial arts master before his transformation. The new version has him learn his skills from a conveniently placed book… 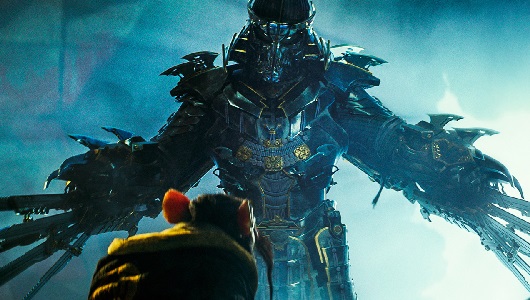 Before I go on, I’d like to say it isn’t all bad. For instance, I actually like the characterisations of the turtles themselves. Leonardo is still the stoic leader, Raphael is the aggressive black sheep in the family, Donatello is the brains of the outfit and Michelangelo is the overly-enthusiastic man-child. They are thinly-drawn but certainly project more personality than any of the Transformers ever did. Their interactions also form the best moments of humour in the movie. 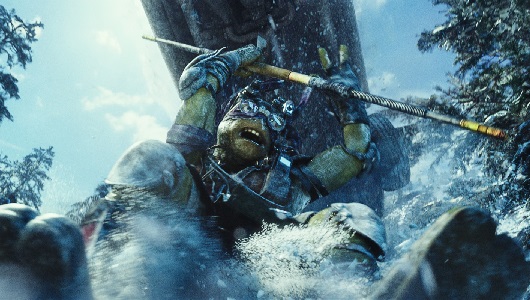 The rest of the cast are merely sketched in. Outside of Fox, Will Arnett’s Vern Fenwick is the comic relief who I didn’t find funny. Whoopi Goldberg’s Channel 6 news editor Bernadette Thompson is practically a cameo. William Fichtner can usually be relied upon to elevate poor material, but his motivation is so poorly explained and the majority of his scenes involve so much exposition that I simply lost interest in his character.

The aspect of the movie I expected to be the strongest was the action set-pieces. However, the various fights are soulless and lack any form of tension and the major chase scene in the movie just fails to excite. I was more entertained by the elevator-set musical interlude the turtles start doing to pass the time than I was during the battle that scene acts as a preamble for! 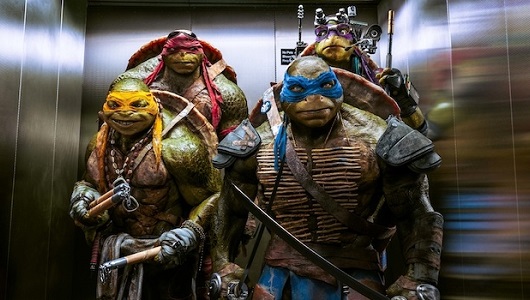 Teenage Mutant Ninja Turtles is a failed attempt to re-launch a normally silly franchise. The sheer lack of fun kills it – what could have been a unique take on the comic book movie formula has turned into one of its most generic examples. If you are looking to spend time with some heroes in a half-shell, I would recommend the 2007 TMNT movie over this.