That three-letter word can illustrate the depth of horror present in Daylight, Zombie Studios’ procedurally-generated survival horror title.  I played through Daylight‘s three hour campaign three times (once in the dark with headphones, once while streaming in the dark without headphones, and once with the lights on with headphones)  to experience its self-proclaimed high replay value. Best described as a vehicle for random jump scares, Daylight left me wanting more.

I adore combat-free exploration games, as they provide truly unique breaks from the testosterone-driven shoot-em-ups that make up a large portion of modern video games.  The horror genre often benefits from a lack of fighting, as vulnerability can help build a terrifying world. Outlast brought me dangerously close to wetting my trousers, as its deteriorating asylum inmates made me feel like awful things would happen to me if I did not run away. Alien: Isolation looks exciting because it takes vulnerability to the next level, pitting your character against an unbeatable foe that is as smart as you are. I found myself anticipating Daylight  because it’s a great idea in theory; it had the potential to really change the survival horror genre, but it ultimately became a shallow, repetitive slog. It is the perfect example of how not to make a combat-free horror game.

Your character, Sarah, wakes up in an abandoned hospital with no idea how she got there. Yes, this is a horror game involving amnesia. Armed with only her cell phone, she begins her escape with the aid of a mysterious narrator. He tells her that she must uncover the secrets of the hospital, as they will eventually free her. Along the way, she encounters a number of witches, reads notes detailing brutal patient suicides, and basically learns that she is in a pretty lousy place. If you feel like I just described every horror game imaginable, you would be correct. Daylight uses a number of horror cliches throughout its three hour playtime, with the most egregious offense coming from a note describing a patient scribbling the number “13” repeatedly. I figured out its major twist about a third of the way through, removing any meaning its ending could truly have.

While the story is a bit of a bore, the gameplay is likely Daylight‘s weakest element. Upon starting the game, you have collect six “remnants” (collectible notes providing the hospital’s back story) scattered throughout the randomly-generated environment. Located in drawers, cabinets, or simply on the ground, these remnants are never overly difficult to find. You have access to glow sticks (the presence of which is never explained – perhaps a ghost rave?) which illuminate possible hiding spots. After gathering your remnants, you head over to a room covered in glowing patterns to collect a “sigil.” The sigil acts as a key, allowing you to unlock the door to the next area. Pretty simple stuff. 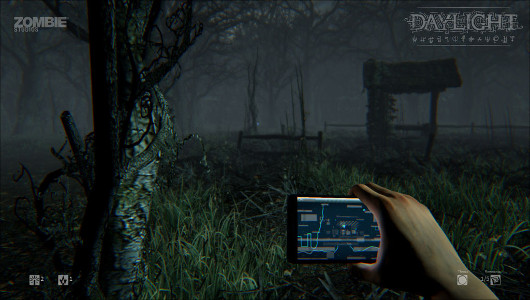 This repetitive item-collecting is made slightly more difficult by the appearance of witch-ghosts, which drain your health by looking at you. To dispatch them, you have to light one of the flares you will find scattered across the environment. Their appearance never really ceases to be scary, as their piercing screams often come out of nowhere. Every remnant you collect causes witches to spawn more frequently, increasing the difficulty of each section as you progress. The lack of enemy variation is forgivable because of the narrative context, but Daylight‘s enemy placement is not.  Because the witches spawn randomly with increasing frequency, you have a fair chance of getting royally screwed over. On two separate occasions, I had a witch spawn directly in front of me, killing me almost instantly. This forced me to go back to the beginning of the section and search through a new environment for another six randomly-placed remnants. This is the only downside to Daylight‘s otherwise awesome procedural generation.

The procedurally-generated environments are the highlight of Daylight, as each of my three runs was entirely different. Going into the game, I thought that the hallways would simply shift into different patterns, but this is only partially true. My first time through, I never had to use a single staircase in the hospital section, as this portion of the game consisted only of hallways and offices. The second time through, I had to walk through a basement full of padded rooms to get to the sigil room. During my first two runs, I was able to sprint through the sewers, but my final playthrough required me to spend more time there than anywhere else. What blew me away was how much the prison section changed; it went from a series of cafeterias to a set of corridors ending in a three-story cell block. It is a truly shame that this awesome level randomization is wasted on a technically flawed, hollow horror experience. 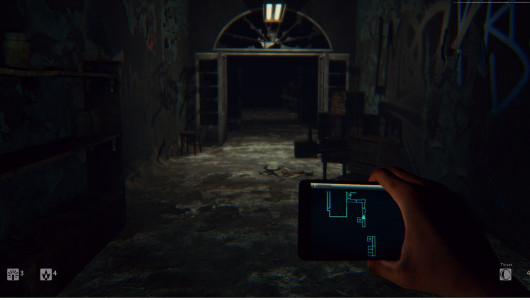 While the frame rate is pretty smooth during the procedural sequences, the set pieces in between each random section suffer from some of the most horrific drops I have seen in recent months. Simply walking around a desk caused my screen to freeze numerous times. It is absolutely bizarre, as one would assume that generating a new environment would be significantly more taxing than generating areas that never change. Every single playthrough had this same problem; if I were to guess, I would say that a single digit frame rate was standard for these intermediate areas. It renders the game nearly unplayable during these sequences, and I quickly found myself longing to get out of these areas as quickly as possible.

As a horror game, Daylight is largely unsuccessful. Sure, it scared me consistently every time through, but these were simply momentary frights caused more by my own jumpiness than proper design. When the witches scream, it made me jump nearly every time, but after the initial shock, I quickly returned to a baseline level of fear. Whereas Outlast legitimately instilled a sense of dread throughout its eight plus hours, Daylight relies on cheap tactics to scare players. I was never stressed out, I never needed to take a break, and I never felt a true sense of “horror.” 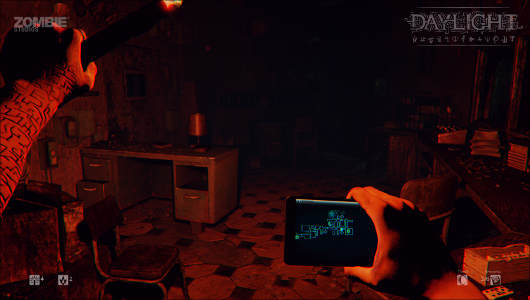 One final feature that warrants mentioning is the brilliant Twitch command integration. During my third playthrough, my Twitch stream was overrun by someone spamming the chat box commands. Typing “act static” caused static to flood my speakers, making me believe that a number of witches were chasing me down. When he entered “act scream,” a horrifying wail caught me by surprise, which made me lose focus. “Act footsteps” created the illusion of somebody following me, which was much more frightening than any other part of the game. If you want the full Daylight experience, be sure to broadcast your gameplay on Twitch, as it has the potential to increase immersion when done correctly.

Look, I really wanted to enjoy Daylight. The idea of a randomly-generated, infinitely-replayable horror game sounded like my cup of tea. Unfortunately, it was simply too good to be true.