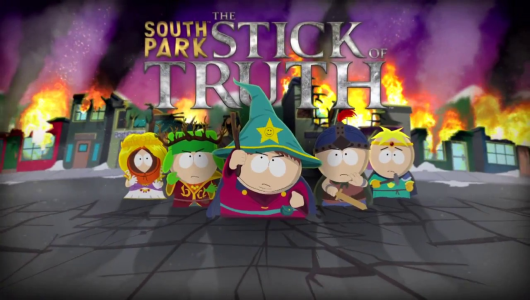 We’ve been waiting a long time for South Park: Stick of Truth and it’s been through some tough times and changes, but has it been worth the wait or are we just set for yet another weak franchise tie-in?

South Park: Stick of Truth started life with THQ with a release date of 2012, however this date was moved by THQ and then lost completely when the company went into collapse. Ubisoft bought the rights to game when THQ’s assets were sold off and the game was instantly put back again. On the Ubisoft blog Laurent Detoc Ubisoft’s North American president said,

“Within three weeks after acquiring the game, we sadly realized we had to turn this thing upside down if we hoped to deliver the experience everybody wanted…It’s been such a major overhaul to get to the point where we are that we couldn’t let it go, even if that meant missing December.”

Matt Stone and Trey Parker seemed to agree and have said how much they wanted the game to feel like an episode of South Park. “Getting the game up to the crappy standards of the show has been a real challenge, and we’re excited to say it’s taken way longer than we thought it would.”

So after the turbulent journey was Stick of Truth worth the wait? Pretty much, yeah. 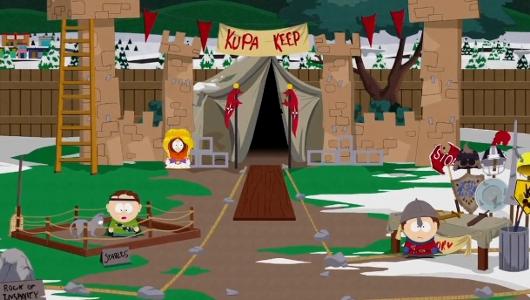 You play as the prophesied new kid to South Park’s 4th grade class embarking on an epic journey to become ‘cool’ and bring balance to the world. Whoever holds the Stick of Truth controls the universe and the battle for the stick has been raging for a thousand years between the Elves and Humans. You need to rally troops and pick sides to fight for the stick. However, your assistance is needed beyond the realms of the Stick War, the very existence of South Park depends on your help to fight aliens, Nazi zombies and other bad guys.

Games that tie into a TV or movie franchise have had a mixed reception in the past and so the pressure was on to make this game, well, not suck. Ubisoft have done a really good though and it certainly feels like you are playing an episode of South Park. That doesn’t mean that it’s all cut scenes however, Stick of Truth has some firm RPG stylistics that, together with the main storyline, give the game a real edge.

You have all the elements that you would normally find in an RPG but all with a South Park twist. The class system allows you to play as Warrior, Thief, Mage or Jew (cleric) each with their own perks, attacks and bonuses. You can also upgrade your weapons, a collection of very random real world objects, with equipment patches such as stickers or dead birds to give additional boosts and benefits. The actual combat system is turn based and gives you lots of time to think out your moves, plan your strategy and generally weigh up the best way to kick ass. Many of the ‘bad guys’ will be weak or immune to certain attacks and so you need to use the examine function to find out just how to go ahead attacking them. This option is great, but on the console the ‘wheel’ can be hard to use as it’s only set up to use the control stick, so you can easily fly past the option you wanted. This doesn’t waste any valuable time as you can take as long as you like with your turn, but it does get really annoying at times.

You don’t have to fight alone though, you have a buddy along for the ride! You collect various characters to use in the buddy slot as you progress through the game, but you start off with your faithful friend and neighbour, Butters. As well as the basic attacks each character, including yourself, has special attacks that need power points, or PP (hur hur) to use. This can often give you a great advantage if you have a buddy that’s a different class to you, Butters can heal too which is rather handy! 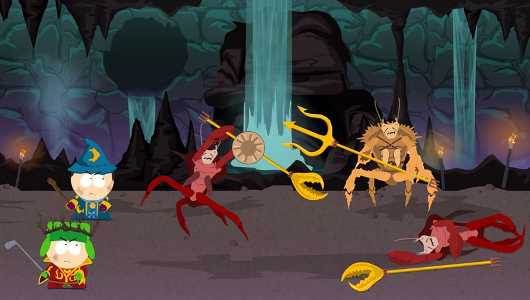 The general gameplay is side-scrolling in the same style as the series and stylistically it’s bang on the mark. You really do feel like you are in an episode and because of this any cut-scenes are seamless and really enjoyable. One thing that does need to be mentioned about the cut-scenes however is how they differ depending on where in the world you are. The game’s Associate Producer took to Reddit to explain this,

While this brings up many questions, like ‘are console gamers more easily offended?’, it also raises a core point that will certainly be made in other reviews of this game; if you like South Park you’ll like this game. The scenes that have been edited out are typical ‘South Park‘ and if you are the type of person to be offended by it, you wouldn’t be playing the game. Instead of the scenes you get an image of a face-palming statue on the background of an EU flag and a description of the scene that’s missing which makes it seem very pointless removing it at all.

And that really is the main point with this game, it’s South Park in game format. If South Park is your ‘thing’ then you will have a damn good time with this game. It’s full of all the characters, humour and elements that make up a South Park episode but stretched out and warped into a really enjoyable game that you can play for hours. The fact that it’s a tie-in game really doesn’t detract from the title, the story-line is strong and nothing feels like an add on or after thought. The side quests often build upon the main quest in a roundabout way too, there’s few little padding tasks such as the typical gather 10 X, go to here and kill 3 X etc. 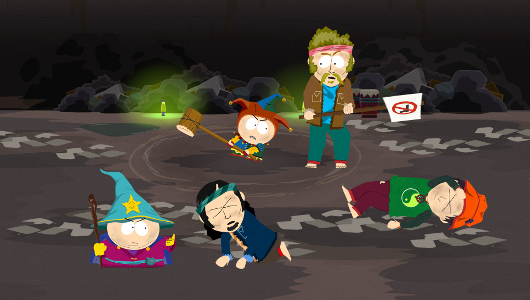 You even get to use your brain at times, having to work out how to get to certain platforms or complete a quest and things aren’t always screamingly obvious. Not that this is a hardcore ‘thinking’ game though, it’s a good ‘plodder’, something that you can casually play and work your way through without getting overly frustrated or feeling like you’re having your hand held. Stick of Truth is much longer than you might think it would be do there’s quite a bit to get stuck into and with the choices you make, side-quests and the achievements available there’s even some replay value.

1 Posts in Total See Them »