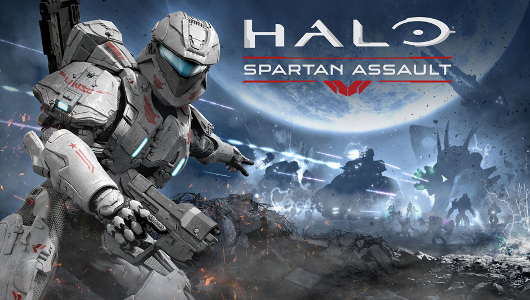 I’m a big fan of the Halo series. Halo 3 was one of the main reasons I jumped on board the good ship Xbox 360 many years ago. I’ve always found the lore of the universe to be fascinating, having read many of the books and graphic novels. But when you come back to the actual roots of the franchise – the games – I have to admit Halo has been struggling to stay relevant in recent years. It needs to do something new and exciting to captivate audiences again.

We’ve seen in the past that a Halo game with a different perspective can work incredibly well. Ensemble Studios demonstrated that wonderfully with the real-time strategy game Halo Wars back in 2009. Halo: Spartan Assault is a different breed of Halo game too. The game was originally released as a Windows 8 and Windows Phone exclusive title earlier in the year – much to the dismay of console gamers. But it seems their concerns have been heard as the game has now released on Xbox One with the Xbox 360 to follow sometime this month. Halo: Spartan Assault is a twin-stick shooter in the top-down perspective. The premise is very simple; you move a Spartan around the battlefield and shoot lots of Covenant in their faces.

The controls are solid and it feels as good as any twin-stick shooter should be. The art direction and the graphical style of the game are superb too but great controls can’t cover up the myriad of gripes I have with Halo: Spartan Assault. The game is incredibly boring, short and repetitive. This is the first time I’ve not been able to care about the story in a Halo game and it’s mainly down to the fact that it centres on my least favourite character from Halo 4 – Sarah Palmer. 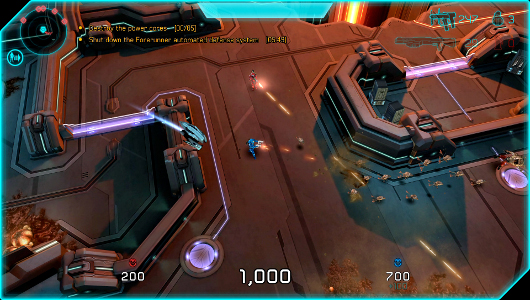 The story is really nothing to shout about. Set between Halo 3 and Halo 4, it attempts to bridge the gap between the two games. Most of the story is told in between levels through either cut-scenes or more likely; walls of text. This is essentially just a Halo novel in game form where you take control of the non-critical parts of the story.

Whilst the level design is good, the game rushes you through them so quickly you don’t even notice it at first glance. Some of the missions can last less than a couple of minutes in cases and they never seem to deviate from the standard “defend this thing” or “kill that thing” mission structure.

I’m not a fan of the loadout system that Halo: Spartan Assault has adopted either. You get very little to no choice in what weapons and armour abilities you take with you unless you have enough experience to buy them or if you part with some real life money to buy in game credits to spend on items. The ominous “Buy credits” button is always looming there on the loadout screen trying to tempt you. Halo: Spartan Assault is perfectly playable without paying any extra money but I can’t help but feel a sizable – and fun – portion of the game is locked off from the get go. 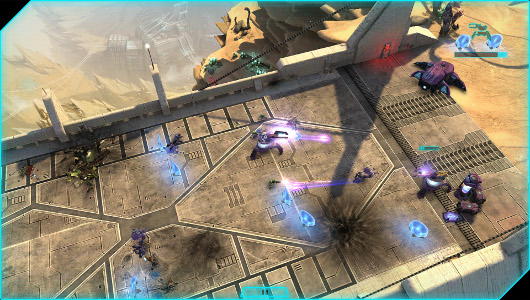 Because of this there are some missions where things can get a little bit tricky, yet you don’t have enough experience to buy that rocket launcher or Spartan laser to help you out. It’s at times like these that people will be inclined to spend their own money just to beat a level and I’m not a fan of that in the slightest.

It eventually got a point with Halo: Spartan Assault where I just couldn’t motivate myself to play more of the game. There’s only so many of the same enemies you can slay over and over in similar circumstances before things start to get old really fast. Couple that with the highly dislikeable story and character of Sarah Palmer, short levels, a shoddy loadout system and micro-transactions that are always lingering in a corner somewhere and you not only have a poor game on your hands, but you’ve got a poor Halo game on your hands. Those are words which I never hoped I’d need to utter.

Halo, as a series is one that needs to change up its formula to stay relevant in the years ahead. I said exactly the same thing about Call of Duty in my Call of Duty: Ghosts review and it’s no different here. With the founders of the Halo series – Bungie – about to unleash their next sci-fi epic in September, 343 Industries needs to do much better than put out sub-par twin stick shooters. Instead they should probably be focusing their efforts on making Halo a game series that can stand the test of time over the next decade. I’d hate to see Halo fade away into a distant memory, but the way things are going it looks as if that may be a very real possibility.