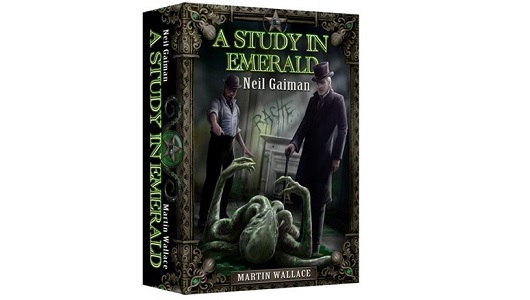 Review: A Study In Emerald (Board Game)

Martin Wallace’s trademark abstraction means A Study In Emerald only pays lip-service to its Sherlock Holmes vs. Cthulhu theme but delivers a deeply strategic experience regardless.

A Study In Emerald is a busy game, its board covered in stacks of cards, bidding cubes and secret agent markers, all surrounded by three different types of progression track. However, beneath this elaborate set-up lies a rule-set that is surprisingly simple to pick up, with tactics that reveal themselves gradually over time. A classic Martin Wallace game then.

Each player takes on the role of an agent either allied with or against the Lovecraftian horrors that have infiltrated the uppermost echelons of the world’s government. Their job is to work together to rescue or assassinate these horrors whilst simultaneously defending themselves from the machinations of rival agents. The twist is that no one knows which side the other players are on and the division of allegiances is not always equal.

To win a player must not be on the same side as the agent with the least victory points and they must have more victory points than the other members of their ‘team’. This means that deducing which players are allies and enemies is of paramount importance since it doesn’t matter how well you do on your own, if another member of your team falls at the last hurdle then it will all be for nought.

As well as increasing the air of mystery around the game this rule also serves as an excellent balancing mechanic. If a player is outnumbered by those of an opposing allegiance they need not worry about toppling every single one of their opponents, they must simply strive not to be last. It also encourages players to engage in natural rubber-banding (to use a videogame racing term) as they give up the opportunity for victory points in order to help those they perceive to be on the same side.

The moment to moment gameplay uses a simple two-action system where players may either place cubes to bid on cards or locations to add to their deck, move the agents they recruit from location to location, assassinate or save alien royalty (or enemy agents) or restock their cube supply. Every turn the decisions are small enough to not need a great deal of analysis but can create extremely tense moments as players vie for control of key cities, or attempt to block another player from recruiting a powerful agent into their hand.

The atmosphere, then, is excellent and completely in-keeping with the premise of Neil Gaiman’s short story as panic and paranoia quickly set in. However the actual references to more specific elements of the narrative are not handled nearly so well; there is nothing about the abilities of the Sherlock Holmes or Moriarty agent cards that really stand out as symbolic of those characters and the locations on the board are too cramped to make the game feel truly global.

It feels like a necessary trade-off to ensure that the mechanics are clear and intuitive and whilst I would have appreciated a more thorough integration of story and gameplay (as in Ankh Morpork) I don’t feel that it hinders the game too much. It’s the players’ narrative that matters after all.

A Study In Emerald is not one for newcomers, but it will reward those that invest in its world with a complex tale of intrigue and betrayal.