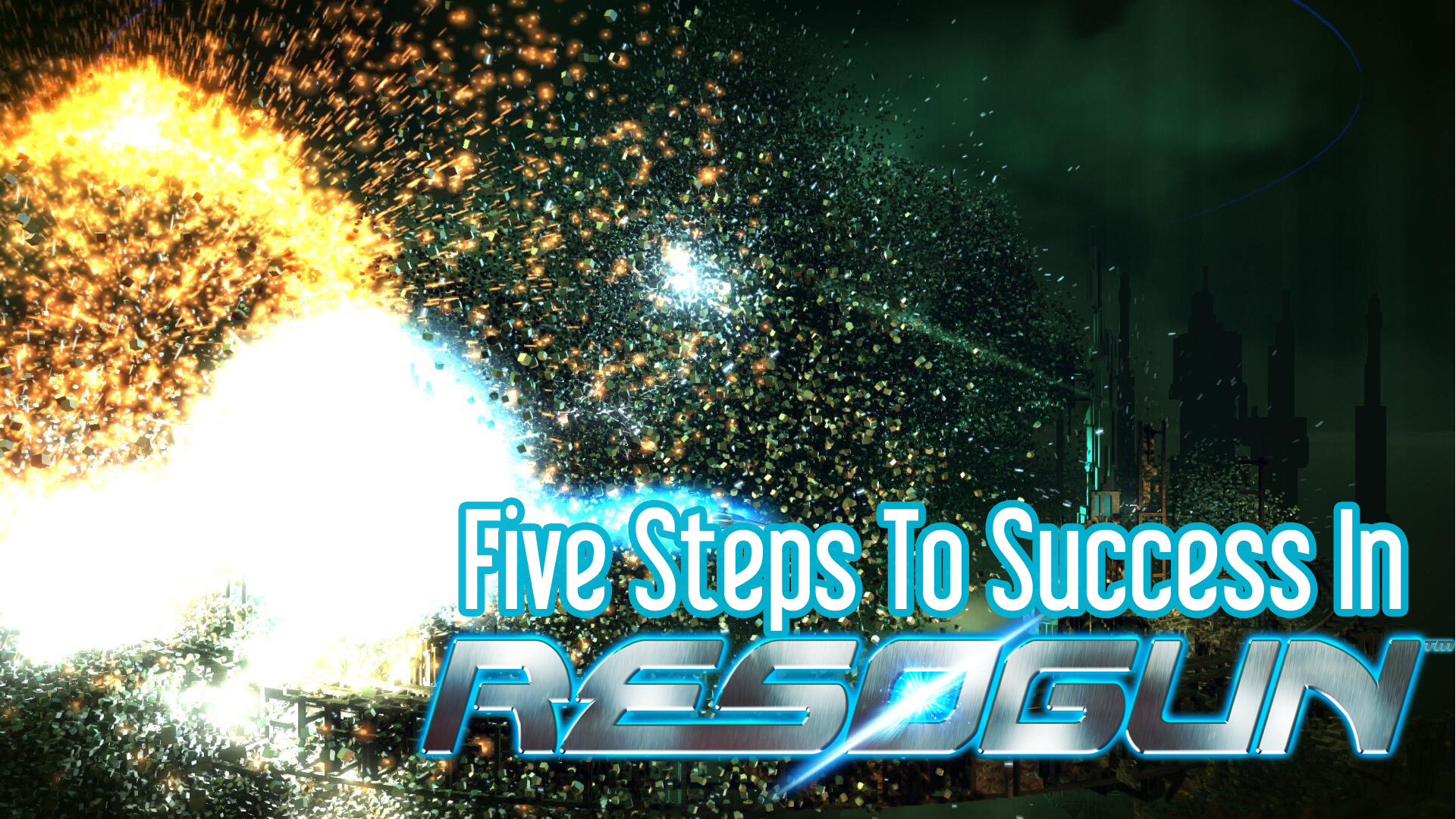 Five Steps To Success In Resogun

Resogun has become the PlayStation 4’s biggest surprise and by far its best first-party launch title. As well as being devastatingly pretty and ridonkulous amounts of fun it’s hard as nails. Thanks to everybody and their mum having PlayStation Plus and getting the game for nowt, the leaderboards are filling up with high scores – so where are you in the table?

If you’re somewhere near the bottom, have no fear. I’ve assembled a few choice broad hints and tips to help hapless space pilots everywhere stand a better chance against already unfathomably perilous odds.

The first time you hear “Human Lost” is heart-breaking; the first time you hear “Multiplier Lost” is soul-crushing. Despite Resogun‘s primary mission being to “save the last humans”, your multiplier is key to getting those leaderboard-topping high scores and it’s constantly under threat. Rule numero uno: make sure you keep it topped up by shooting enemies and picking up humans every second of play.

If it’s just not possible to make it to somebody before they are abducted or hurled into a chasm, focus on taking out nearby aliens before you crash headlong into them and die. You’ll lose out on the Human Saviour bonus awarded for saving every human in a level – and that stings. In the long-term your score will benefit from that precious multiplier you worked so hard to achieve in the first place – moreso than if you rush after a human you’re not altogether sure you can reach.

At the end of each phase, you are granted a temporary reprieve from your multiplier cooldown, indicated by the multiplier at the top of the screen turning blue. If the screen is empty of enemies, use this opportunity to catch your breath and let the next wave come to you. That way, you get a breather and your shooting spree starts when you’re ready.

If and when your screen is light of enemies, fire with discretion. You don’t need to completely destroy an enemy to add to your existing multiplier – merely hitting it will suffice. Delicate shooting will save your skin – but most of the time, feel free to go crazy with the laserbeams.

As a last resort, use a bomb to wipe out every enemy currently in play. Your bombs are precious and few in number – and there’s no guarantee that the next wave of enemies will spawn in a convenient place to keep your multiplier going. Only use a bomb when it’s absolutely necessary to keep those hopes of high scores alive. 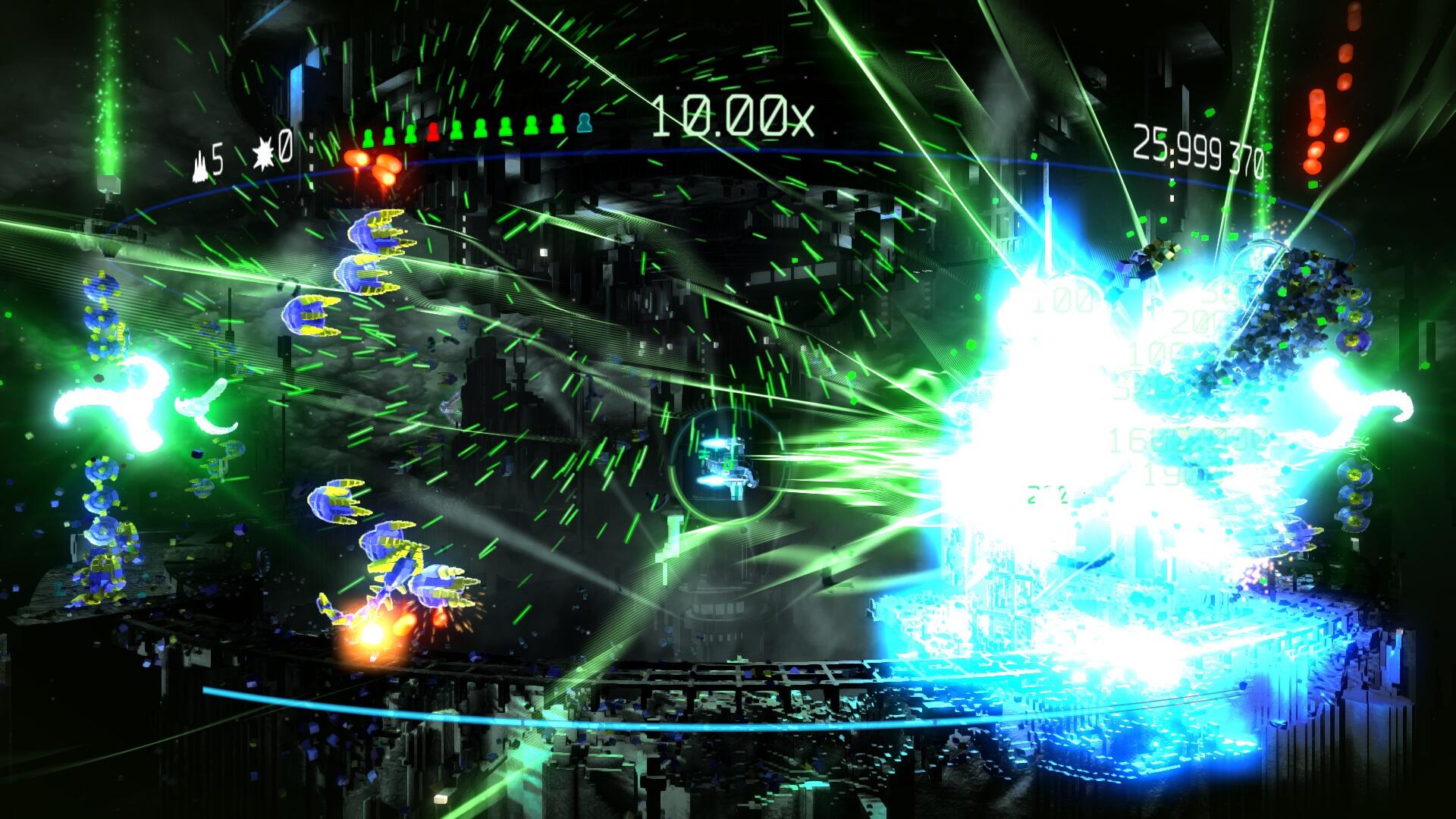 For Resogun success, refer to the teachings of S Club 7 and don’t stop movin’. Your ship is more agile than those of your enemies, and your lasers are faster than theirs. This means dodging shots and other ships is not just an option but essential when looking to stay alive for longer.

Once you’ve grown accustomed to one of the three ships on offer, stick with it and get a feel for how fast it flies. You’ll develop a sense of where your ship can go over time and laser-dodging will become second nature.

You’ll find that enemies like to converge on your existing position. Take advantage of this by moving away from them as they converge, lining them up for easy takedowns. Keep your agility in mind in boss fights too, especially as homing missiles start to crop up. This is especially true when keeping your boost and bomb stocks in mind, because…

I’ve already covered how crucial it is not to waste bombs in case your multiplier needs emergency assistance but the same is true of your boost, triggered with the L1 button. Despite the fact that it constantly recharges, Sod’s Law will dictate that boost will run out at the most inconvenient time resulting in fiery explosive planet-ruining death.

The key is to use your boost lightly. Gentle boosts to escape from trouble are generally all you need – just enough to get away from the busiest area of a crowd. You are completely invincible while using boost, so use this to your advantage by taking out an enemy or two and dissipating some bullets.

There will be times when using most of your boost at once is necessary. If you absolutely need to reach the other side of the level, try and aim for some enemies. The resulting explosion when you finish boosting will be bigger and you’ll also regain some of your boost bar as well.

That said, abuse your Overdrive

Overdrive is Resogun‘s graphical pièce de résistance and it’s one of the most satisfying things to trigger too. Built up by collecting the little green globlets left behind by fallen enemies and triggered with the R1 button, Overdrive temporarily grants you invincibility and a far reaching beam of insta-death for all who come near.

It’s also key to high-score nirvana. Starting from 100 points, the point worth of each enemy increases by another 100 with each kill – the 100th enemy being worth 10,000 points alone. A 100-enemy Overdrive streak is worth 610,500 points without multiplier.

There are two key tricks to using Overdrive: building it up and knowing when to use it. Consider every little green glob left behind as precious, as every mite of it counts towards earning your Overdrive. You’ll want to aim to use it at least a couple of times every level, but avoid using it up just for the sake of it – because it’ll be right after it runs out that a giant crowd of glorious ships arrive.

It’s worth noting that the bigger ships occasionally break into smaller ships or fire off extra targets, each of which count as an individual target when using Overdrive. Treat them as your Resogun Black Friday and go crazy. 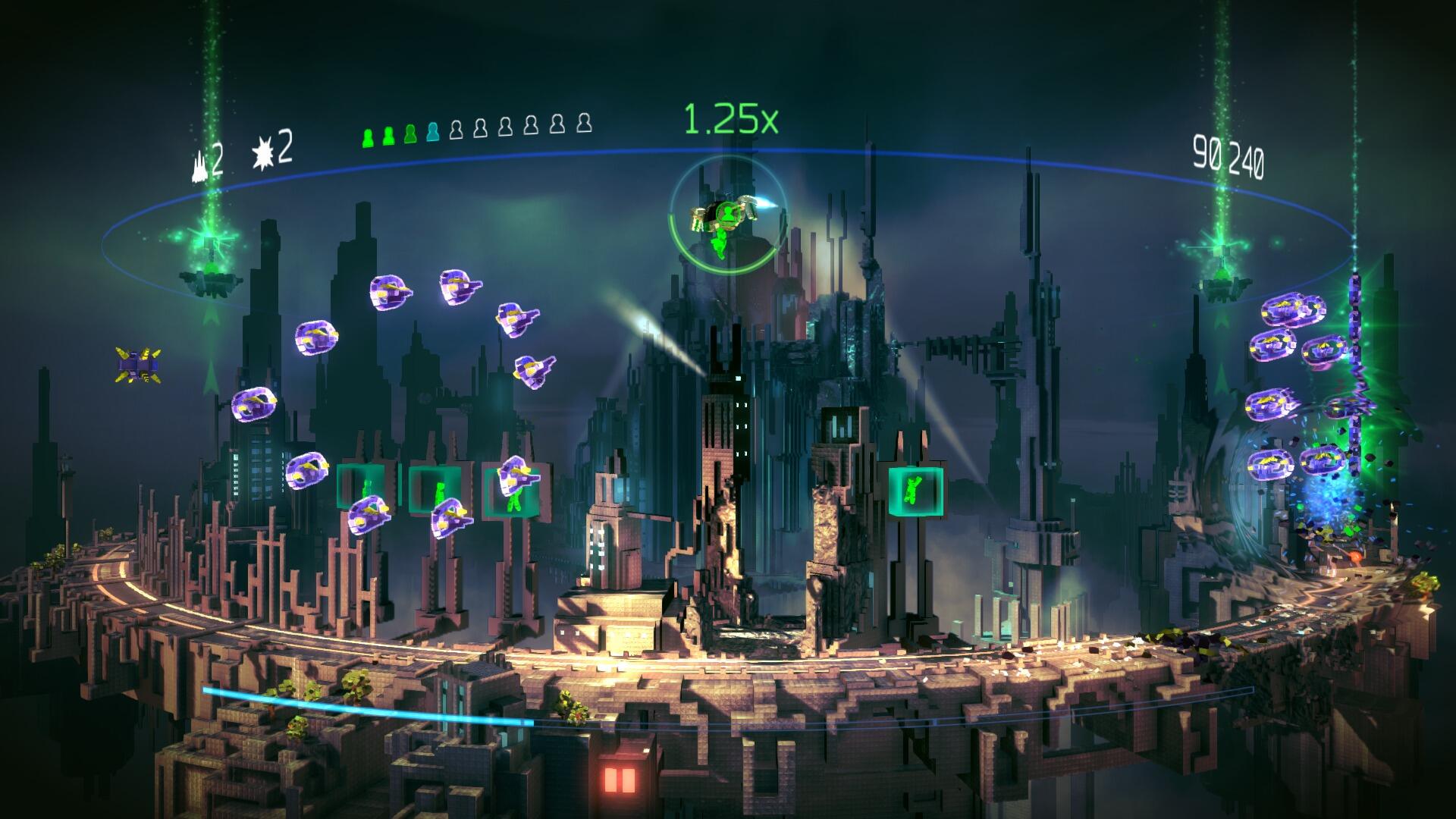 With time, patience and plenty of gusto you’ll be blowing up and rescuing things in perfect harmony

At the end of the day, Resogun is a game and games are made with designs in mind. The patterns the ships spawn in and the locations of humans are no accident – by and large, everything is lined up to be tackled in one gigantic combo.

Essentially, don’t try and fight the game too much. If Keepers are appearing in one direction, don’t fly the other way. Same rules apply if a human spawns somewhere that you don’t care much for reaching. Consider these your hints as to where you should be for the next step ahead, because you can guarantee that the next big target will be placed in relative vicinity – or at least along the path of several convenient alien ships you can use to top up your multiplier.

By carefully balancing your human-juggling with ship-blasting and more besides, you can easily keep your combo alive and elevate your scores to god-like levels of brilliance. Just don’t try and disrespect the order of things too much or you will find yourself in the middle of nowhere, wondering why the enemy ships are all at the other side of the level and where that UFO is that’s abducting all of your humans.

Those are just my big key Resogun tips but I can bet you all have loads more. Maybe you’ve got an ideal soundtrack to stream on Music Unlimited – when it works, anyway – or a favourite way of bringing down a boss. I’d love to hear all of your tips too.

Keep your peepers peeled for a video version of this guide too, to prove I’m not a raving looney. Until then – bye!