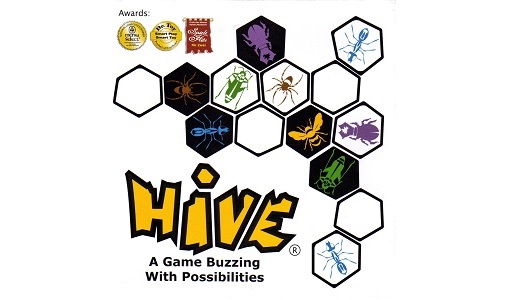 The perfect pub game, Hive is a satisfyingly chunky experience that can be taught in less than five minutes.

Hive is over a decade old but it feels like it could have been around for centuries, with its classical black and white counters and discrete movement options for the insects which provide only the most cursory theming for what is, at its heart, a thoughtfully abstract puzzle game.

Players are given a stack of eleven hexagonal tiles which they must take turns to place on the table in front of them. The aim of the game is to surround their opponent’s Queen Bee tile on all sides and once a Queen Bee has been placed, players have the option of moving tiles already on the table according to the type of insect painted on them. Worker Ants can move to any part of the Hive as long as they can slide there without leaving the table. Grasshoppers can jump over rows of tiles of any length (even into slots that are otherwise blocked off) and Stag Beetles can  move one space in any direction- including on top of other tiles, temporarily converting them to that colour (which aids in the placement of new tiles). Like the King in Chess, Queen Bees are fairly slow and can only slide one space per turn so must be protected at all costs by the judicious movement of other pieces. 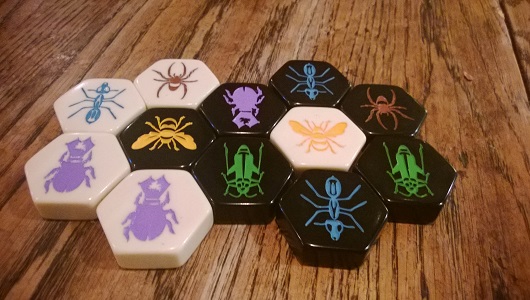 Tactical depth is increased with two simple rules: firstly, you cannot move a tile which would split the play area into two separate ‘hives’ and secondly that a new tile cannot be placed adjacent to a tile of an opponent’s colour. This means players can incapacitate other pieces by making them critical ‘bridges’ between parts of the hive, or prevent new pieces appearing by moving to potential placement points.

It feels like Chess in that it demands a similar type of mindset to master but is streamlined in both complexity and size in a way that keeps games short and snappy. Since the only play area required is one that is a) flat and b) about a foot square it also makes it a dream to take to the pub and tinker with over a couple of pints.

As a way of enhancing an already social environment, Hive is excellent, however its simplicity and wafer-thin theming mean that it’s not a title I would invite people over to specifically play. Like the classical games it harks back to, repeated playthroughs of Hive reveal some standard opening gambits and too many games would be clearly over several moves prior to the winning turn, resulting in a reluctant forfeit from the losing player rather than tense battle to the finish.

But Hive isn’t designed to replace something like Seven Wonders in your board gaming schedule, it’s designed to replace the tattered and sticky pack of cards I’d crack out in the local pub – with its travel-friendly case and wonderfully chunky (and washable) plastic pieces it does so admirably.

Everyone should keep a copy of Hive in their bag at all times.