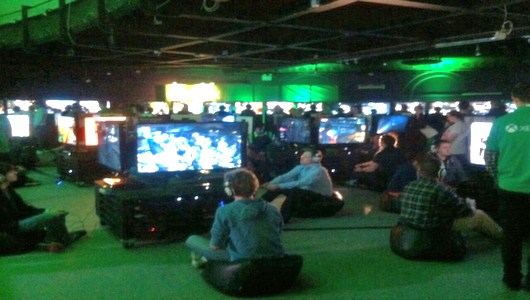 For the four of you who don’t know the Xbox One launches this Friday all over the world. Now you may have noticed that the embargo on the Xbox One reviews ended on Wednesday and websites have been publishing their opinions on it. Because of this, this article will not be a review of the console itself, but rather a review of the Xbox Area One Tour that has been travelling the world. The Area One Tour is a chance for gamers to get their hands on the console and many of its launch games early. 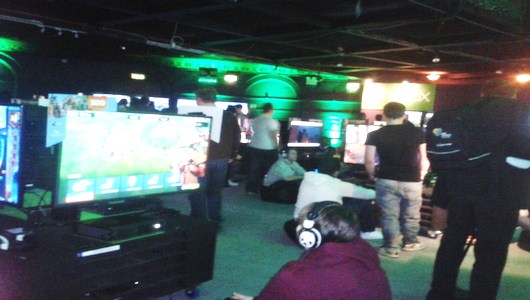 Let those who worship PS4’s might, beware my power, Xbox’s light!!!

I guess it’s best to tell of my experience from the beginning. Being from Ireland, I had to attend the tour in Dublin in a place called the Ambassador Theatre. I had been there before for various gigs and thought it was quite small so I was initially worried that there would be too few consoles with too many people, leading to long lines in wait to play. When I arrived there was no doubting that it was an Xbox event. There were green Xbox banners everywhere and railings hung with Xbox emblazoned drapes.

Once in the door, we were given our wristbands and told that there were games both on the floor and on the balcony. I had been on the balcony before for an Avenged Sevenfold concert and wasn’t expecting much when I got up there as I remembered it being quite small and also tiered – I was sorely mistaken however. Not only had they removed all the seats as I expected but they had somehow managed to remove the tiers and turn it into a flat surface. They also managed to turn a seemingly small area into what seemed like a good-sized space. The whole room was bathed in green light and there was Xbox logo’s flashing and spinning on the walls. All in all, it made for an impressive first impression. It is worth noting as well that there were refreshments available to purchase, which I thought was a nice touch as I wasn’t expecting it. 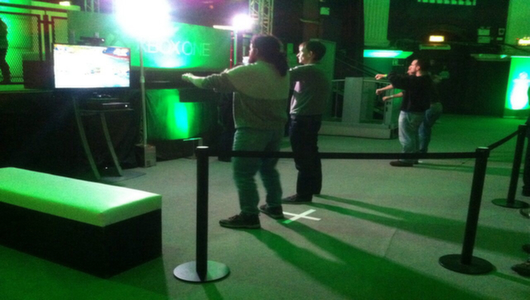 Initially I was told not to take pictures but they relaxed this later on. I was unable to get pictures of upstairs because of this as by the time they allowed it, we had moved on. Now onto the games. On the balcony were eight to ten consoles with Killer Instinct playable and another eight to ten with FIFA 14 playable. Each station was set up with two controllers for head to head play, though of course, you could play by yourself against AI if you wished. Half the Killer Instinct consoles were set up with the MadCatz fight stick. I figured out pretty quickly that I am awful with the fight stick – though I could hold my own with a controller.

The controller, by the way, is an absolute dream to use. It feels intensely familiar, though the changes are all noticeable. The recessed battery pack, revamped triggers and bumpers, and smaller sticks all contributed to a more comfortable, tighter and overall more responsive experience.

Now, lets head downstairs shall we? And yes, I did slide down the big curved handrail and yes, it was fun. Downstairs was even more impressive than upstairs. There was the same lighting etc. However, here, there were about sixty consoles total with a huge variety of games. The big titles you would expect were there such as Ryse, Forza 5, Dead Rising 3, Call of Duty: Ghosts and Battlefield 4, but there was also many smaller games such as LocoCycle, Zoo Tycoon and Max: The Curse of the Brotherhood. There was, of course, the obligatory Kinect station with two-player wave racing from Kinect Sports Rivals. Needless to say, it was the least played game apart from Zoo Tycoon. 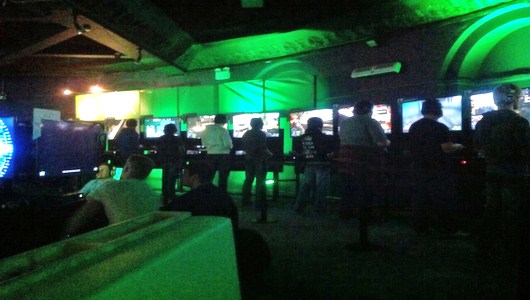 The main body of the floor was dominated with multiple stations of four TVs and consoles arranged into squares with pouffes to sit on. These were dedicated to the single player games like Forza 5 and Dead Rising 3. In comparison, all the multiplayer games were standing only. The hardware is worth mentioning too. Each TV was a high quality LG screen and every console had an excellent surround sound headset attached. This all made for an excellent audio and video experience throughout.

I’ve saved the best and most impressive for last. Along two walls were multiple consoles networked for multiplayer in both Call of Duty: Ghosts and Battlefield 4. COD had ten consoles lined up in a row for a five on five deathmatch where all weapons, perks and attachment were unlocked for the full experience. Similarly Battlefield 4 had everything unlocked, except here, it was eight on eight in domination. Because it was a ticketed event there wasn’t an over abundance of people which meant we were never waiting more than a couple of minutes to play any of the games. 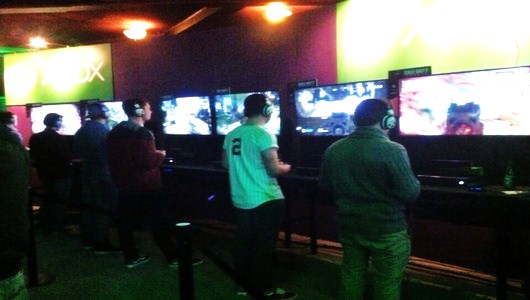 You stole my kill you rotten CoDfish!

I would definitely recommend going to an Area One event if you can. It’s a great opportunity to play the consoles early. It’s also a good chance for someone who is still on the fence to get some hands-on experience to help make a decision and of course, for the people who maybe can’t afford it at launch, it’s a good opportunity for them to whet their appetite a little. While the tour is nearing its conclusion, there are still a few dates to come including a few around England in late November and December. Just click here for more information on tour dates.

(Apologies for the shoddy picture quality, the lighting wasn’t very conducive to taking photos so I had to up the brightness a bit to make them usable)