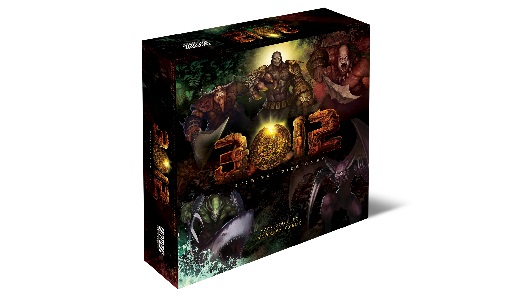 In the distant future an unknown apocalypse will have transformed deck building card games into a brown mush, apparently.

3012 is an ambitious game that tries to do more than it can handle, swamping the simple premise with elaborations and additions that only serve to bloat the game and extend an already dull playing experience.

Players take on the role of tribal leaders- animal-human hybrids whose goal is to earn prestige by defeating ever more dangerous fantasy monsters. To do this they must purchase powers, allies and weapons from four discrete decks and level up their heroes by defeating various smaller enemies in battles that other players may choose to participate in – either as allies or opponents. 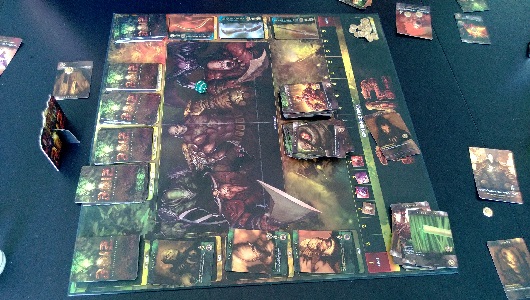 It’s not a bad idea for a theme but the murky card artwork and flimsy components fail to evoke any kind of atmosphere, instead painting everything in various shades of brown. The difficulty in differentiating cards not only makes the long and complicated set-up more difficult but also means that every new card revealed throughout the game must be picked up and read by every player before they can continue.

There is some structure to each turn, in that players must decide whether to take part in a fight before moving to the purchasing phase where they draft cards to expand their personal decks. However, since you must discard all your cards at the end of the turn, players tend to just spread their hands out in front of them and start totting up numbers to find out what they can do. It’s house-keeping at its worst and other player’s contributions to battles tend to have so little effect on the outcome that the interaction between them is minimal. Enemies were more likely to run away due to the result of a random dice roll than beat anyone with a reasonable hand of cards.

This mess of ‘stuff’ is only compounded by the card powers themselves, most of which can be used at any time during a player’s turn, thus blurring the stages of play even further. They’re also so loosely defined that we were forced to Google other player’s interpretations before setting our own house definitions.

The bottom line is simply that this game is dull. There is no drama, no escalating challenge, no meaningful implementation of the theme within the actual rules of the game. Deck-building is an overcrowded genre as it is and this designer’s attempt to stand out by simply adding more only serves to make the players feel even less in control.

Good deck-building is entirely about managing probabilities and the best games which use it require careful thought and optimization to ensure players are able to draw a good hand. Adding a dice rolling element that could essentially render that hand useless undermines that work and makes you wonder why you bothered in the first place.

Fans of deck-building should look elsewhere for their fix. I recommend Eminent Domain or Core Worlds for something a little sleeker or meatier respectively.