Preview: The Legend of Zelda: A Link Between Worlds

The second Legend of Zelda title on show at the Nintendo event was the much anticipated A Link Between Worlds, the sequel to 1991’s A Link to the Past, arguably the best game in the series to date. Like with Wind Waker HD, when I first saw the announcement video, I wasn’t too impressed. The visual style looked strange, and the gameplay looked a little too Zelda-by-numbers which didn’t bode well, considering the legacy this game was continuing. After a quick hands-on with it though, my mind was completely changed and I can honestly say A Link Between Worlds is shaping up to be something very special indeed.

There were two timed locations on show; the over world and a small dungeon. The over world is an updated version of that from A Link to the Past and allowed limited exploration. It was in the dungeon that the demo really came to life, as Link solved puzzles, battled familiar foes and (if you were quick enough) a very familiar boss.

Visually, the game looks fantastic and makes excellent use of the system’s 3D capabilities. When mixed with the old-school top-down visuals, the 3D gave the dungeon real depth as Link climbs to higher levels of the tower and drops down to the floors below. When Link hops over holes, he appears to pop out of the screen in a simple yet extremely effective technique that really adds to the game’s charm. 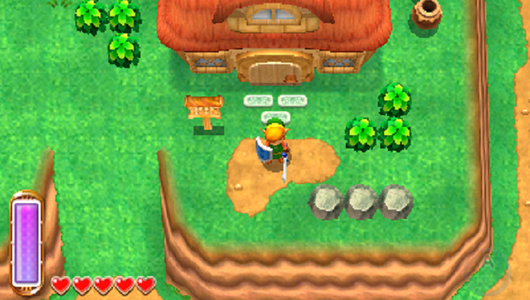 I’ve seen this house somewhere before…

One of the coolest new aspects of the demo was seeing Link’s new merge ability in action. The merge ability allows Link to become a drawing on the wall, granting him access to otherwise impossible to reach areas. This has been used to great effect for puzzle-solving and moving-platform sections, and even sees our brave hero use it to slip through a barred window to get to the outside of the tower. The potential for puzzle-solving and even boss battles is huge, and I really hope Nintendo make the most out of this fantastic new feature.

As with the other modern hand-held Zelda titles, the item and equipment menu is on the touch screen allowing for quicker switching, and it takes advantage of the four face buttons too, so now Link can have four items equipped at once, making for even less time spent item swapping.

The thing that really struck me about the demo as a whole was how the game has managed to perfectly blend its modern and retro aspects. The gameplay feels so familiar, but there are enough new features in there, whether it be the use of 3D or the merge ability, that make it feel like a completely new experience. 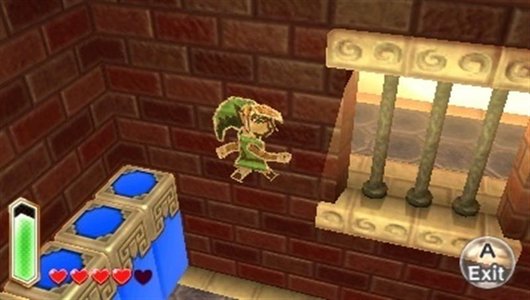 Screenshots alone do not do this game justice.

A lot of care and attention seems to be going into this title, and it’s great to see. As a huge fan of the Legend of Zelda series I was extremely happy with what was on show. Speaking to the reps I was told that there is still much more to be announced over the coming months about A Link Between Worlds, and I for one cannot wait to see what else they do. If this is a sign of things to come then the future is looking better than ever for this beloved franchise.

Tags: 3DS, a link between worlds, Nintendo, The Legend of Zelda